INDI for Java is a set of libraries (written in the Java programming language) to implement Clients (graphical and not graphical ones), Drivers and Servers that follow the INDI distributed control protocol, a protocol designed to operate astronomical instrumentation.

Note: The INDI for Java library is currently ready to be used in Android devices (version 8 and higher).

The provided libraries are focused on the development of Drivers, Clients and Servers using the INDI protocol in the Java programming language. If you are a regular software user or if you are looking for a simple program to control your astronomical devices and you don't know anything about drivers, programming and Java probably this page is not for you. Try looking at INDI Clients for a list of programs that may be useful for your purposes.

However, if you are a programmer and you want to start your own astronomical control program or you want to program a driver for a particular astronomical device, this might be your starting point.

Please note that this libraries do not pretend to substitute or even replace the original INDI libraries which are still used and actively developed. Moreover, this project does not pretend to mimic every single option that the original libraries offer and, in fact, the programming ideas behind this library differ in some points to the original ones: particularly, INDI for Java tries to provide a truly object oriented approach in the development of INDI compatible software.

Where do I start?

If you are interested in the project, you might want to check the Downloads available for the project. In those downloads you have all the necessary tools to begin developing you're own INDI Clients and Drivers: You'll find the source code for the library, the compiled libraries (in .jar format), all the Java Docs for the libraries and even some example files to start experimenting.

It is also recommended that you check the original INDI Library web page in which you will find lots of information about the INDI protocol, the original INDI libraries (written in C and C++) and many more resources (including a developers mailing list) that might help you start developing your own INDI related projects.

In the Downloads section you can find all the Java Docs for the INDI for Java libraries along with the source code. However, you can also check it only in the following links:

The INDI for Java library is currently ready to be used in Android devices (version 8 and higher).

The INDI for Java Server library implements a basic but completely functional INDI Server. This server is able to load INDI Java Drivers, Native Drivers and connect to other INDI Servers. If you want to use it, you can check the Basic INDI Server Manual.

Some simple tutorials on the basic usage of these libraries are provided in the following links:

Some screen shots of applications developed with the INDI for Java Libraries: 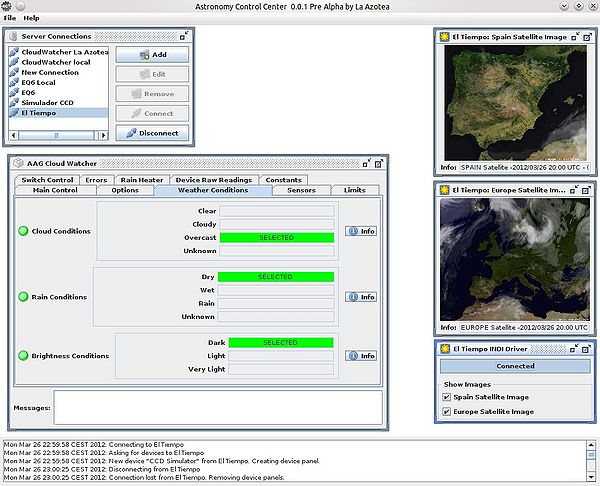 A snapshot of an Android device running a basic INDI Client, a basic INDI Server executing a Driver to control a telescope connected to the device via Bluetooth. Courtesy of Alexander Tuschen. You can check his project in [Android INDI Server]. 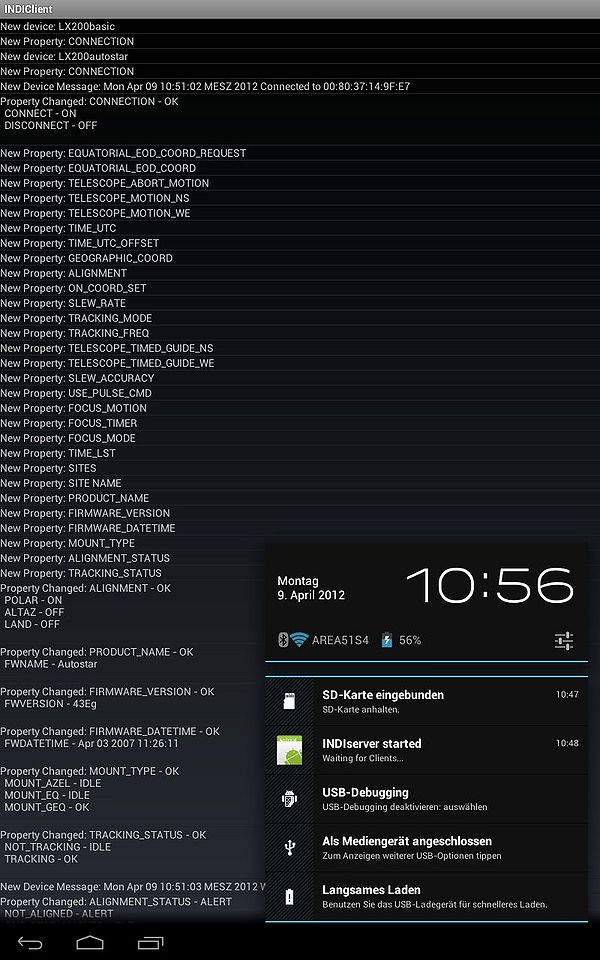 The INDI for Java libraries are being developed mainly by Zerjillo (zerjioi AT ugr DOT es). However, some other people is collaborating: