OK, I got kstars compiled using seanhoughton's method. I am now trying to work my way through getting KStars / Ekos / INDI up and running, and I'm getting a worrisome error in the logfile in the Terminal Window that kstars opens:

I have tried running

from the commandline (which seems to be how to start klauncher, please advise), btu that spits out this error:

Which leads me to believe that it's having a problem with the " " in "Application Support". Is there a way to get kdeinit to escape the space character, or some other way to get klauncher launched?

Any advice at this point would be appreciated.

Replied by Jasem Mutlaq on topic KStars on Ubuntu, Can't compile with QtCreator

Absolutely no experience here with KDE on OSX, perhaps you can try the KDE Forums for a better chance of response.
Jasem Mutlaq
Support INDI & Ekos; Get StellarMate Astrophotography Gadget.
How to Submit Logs when you have problems?
Add your observatory info
6 years 8 months ago #7350
The topic has been locked.

Well, this has been an interesting ride.

About five years ago, I heard about INDI, and it sounded like a path out of Windows, and in particular, sounded like a great way to use my Mac for astronomy, natively (my observatory runs in a VMWare Fusion VM at the moment). At the time, it felt like there was just not enough device support to justify trying to switch.

This time out, it looked like there was a lot more device support, great job everyone, so I decided to give INDI a go on OSX.

In the end, I got INDI 1.2.0 and Kstars 2.5.0 (compiled under KDE 5.16.0 and Qt 5.5.1) running on OSX 10.10.5. I never quite got all the icons working in Ekos. I couldn't get the indi_qhy_ccd driver to build on the Mac, so I tried both Astroberry 1.0, and the latest Raspberry Pi daily builds (the RPi stuff was on a RPi 2 running Raspbian Jessie), where it built, but was unable to connect reliably to either my SSAG or QHY5-IIL.

I felt like I was a couple a moving parts away from a 100% Mac solution in the observatory, and was setting up to write a port of Lesvedome (K8055 based dome under ASCOM) as an INDI driver.

Perhaps this all just works out of the box on Linux, but I'm feeling like we are still "not quite there yet" on OSX, and so I will just put this project back on the shelf and go back to ASCOM for now. Maybe I will try again in a few years, when Windows starts wearing on me again.

For the record, the only reason I am running KDE on the Mac is to run Kstars, which, after all, is part of the KDE Education package.

A suggestion to someone with a little time on their hands, write a small utility that will enumerate all of the "full names" on a given INDI server. Trying to glean that info from log files was the second-to-last straw.
6 years 8 months ago #7383
The topic has been locked.

Sorry about your rough ride, why don't you try the clients built specifically for OSX? i.e. AstroTelescope and AstroImager? This way you can perhaps runs INDI on a raspberry pi and the client on your OSX?
Jasem Mutlaq
Support INDI & Ekos; Get StellarMate Astrophotography Gadget.
How to Submit Logs when you have problems?
Add your observatory info
6 years 8 months ago #7384
The topic has been locked.

Replied by Sean Houghton on topic KStars on Ubuntu, Can't compile with QtCreator

Good luck with the OSX port. I somehow got it to work at one point and last month, after my older macbook had a beer-related incident and died, I tried to get it running on a different machine and ran in to a bunch of new problems. I'll give it another go this weekend and see if I can get something working. Note that even when I did get kstars up and running on OSX I had no icons. It looks like not many people are using KDE on OSX. I would normally just run it in a VM, but I was having tons of problems running any of the kstars VMs in virtualbox - lots of OS hangs, graphical corruption, and mouse-not-responding problems.

I deal with enough software problems at work, so I have a small frustration budget every month to use on my hobbies.

All the work happening on kstars/ekos is awesome so it's worth pushing through to try and get it working. I'm actually tempted to get a low-power laptop and just run linux on it for kstars.
6 years 8 months ago #7408
The topic has been locked.

Replied by Derek on topic KStars on Ubuntu, Can't compile with QtCreator

Same here
This is what I did. I bought a second hand desktop from e-bay and leave it in the observatory running indi,kstars & ekos. I remote desktop into it.
Celestron C11 iOptron CEM120 Atik 383L
HP8300 Elite i5 running Xubuntu, Indi, Kstars & Ekos
Roll off roof observatory
Battling Irish weather
github.com/dokeeffe
twitter.com/BallyhouraStars
6 years 8 months ago #7410
The topic has been locked.

It was your instructions that got me all compiled and running, so follow the hints your-self-of-several-months-ago gave, and you'll get there, beer notwithstanding

I have found that which Hypervisor I use makes a big difference in my success -- I really wanted VirtualBox to work, but found myself plagued with USB problems and instability. I had much more success once I switched to VMWare Fusion. It's non-free, obviously, but the price tag isn't that big ($70 or so), and it has a much better hardware integration between the Mac host and the guest OS (which in my case was Win XP). Granted, the use case I was attempting was hooking all the photo rig to ASCOM on the XP box through the VM, so YMMV if you are only trying to send INDI TCP packets across. Still, having just one USB cable between the rig and the computer was a joy (there was a powered hub at the mount, naturally).

I lost my astro VM in a nasty astro-divorce (long story), so I'm rebuilding my software rig from scratch at the moment. Let me get the ^&$%&(*^ thing running in *(^$(&^ Windows, so I can take some pictures whenever it decides to clear up, and maybe I'll have an appetite to play with "alternative OSes"

Heck, I might even check eBay for cheap laptops...

I am wondering whether Sean Houghton or anybody else has successfully gotten an OS X native version of KStars and Ekos up and running yet? I am primarily using KStars on my Raspberry Pi for astrophotography but I would like to have an OS X native version as well. I tried about 4 months ago using homebrew and this git github.com/haraldF/homebrew-kf5 using the methods described by Sean Houghton in his gist gist.github.com/seanhoughton. At the time, I ran into an issue installing some of the dependencies--I believe it was related to Kate--and got no further. Every now and then I have been checking to see if anyone has made any further progress. I noticed that Sean Houghton's gist was updated very recently and decided to give it another try. I got much farther this time, in fact, I got all the way to the cmake step, but then it did not generate a make file. Looking at the CMake Log file generated, this appears to be the only issue:

I also noticed that there was an Xcode Project in the files I had downloaded from the git repository. I tried opening that up and it successfully built the project, and I copied the data files into a directory that it could get to. Then when I tried to run it in XCode, it failed right after the startup screen with the following highlighted in Red:

and in the console I also noticed:

Any ideas? This is as far as I have gotten before so it is promising, but something is still not right.

I just played around with the Xcode project in Sean Houghton's git again and found that I was able to get KStars to Run natively in OS X, at least from within Xcode!! It turns out I tried to do it too late at night and I missed the fact that I had the kstars build configuration for running it set to "debug" instead of "release". Therefore it stopped at the first error even though it did not actually crash the program. So please ignore the last part of my last post. It actually did work. But the beginning of my post is still correct, the make install from the command line did not work. I still had to open the Xcode project after I used cmake and build from in there. There are still some issues. The icons are not installed for one thing and I did not see Ekos in the menus for another. But this is definitely progress.
The following user(s) said Thank You: Jasem Mutlaq
6 years 2 months ago #10314
The topic has been locked.

Over the last couple of hours, I just tried a variety of different things to get Ekos and INDI to work in the KStars instance that I am running in Xcode. I finally came up with something that worked. I don't know if it is the best way, or even how well it works, because I only tried it with the simulators so far. But everything I tried actually worked properly, which is very good news. I will try to figure out the icons next. What I did to make it work was:

1. I followed these instructions to build INDI from source and get it installed on the Mac in the proper location: indilib.org/forum/general/210-howto-buil...st-libindi-ekos.html

Note that before I used the cmake command, I followed the instructions in the Mac OS X readme file in the download from the git. This included downloading libnova-0.15.0, libusb-1.0.19,cfit3380, and gsl-2.1, then placing the unzipped folders at the same level as your git download, and then running configure and make from the command line in the gsl folder.

2. Make sure you have home-brew installed. brew.sh

4. Then I picked an empty folder on my hard drive to download Sean Hougton's git of KStars. I executed this from the command line in that folder. You might need a github account and password for this step:

5. Then I ran the following commands to export useful directory paths and use cmake to build the Xcode project (also on his page):

6. There should now be an Xcode project in the kstars-build folder. Open that and try to build it. As I discovered, you will probably want to edit the "scheme" so that your build configuration set to "release" so the first error doesn't stop it from running.

7. If it built successfully, KStars should start running. I tested Ekos by connecting to a remote indi server rather than the local one because I know there were problems with the local server on other operating systems before and the remote method has typically worked. As I mentioned, many of the icons are still not correct, but at least it is working.
The following user(s) said Thank You: Jasem Mutlaq
6 years 2 months ago #10317
The topic has been locked.

Here are some screenshots showing what I have running out of Xcode so far. 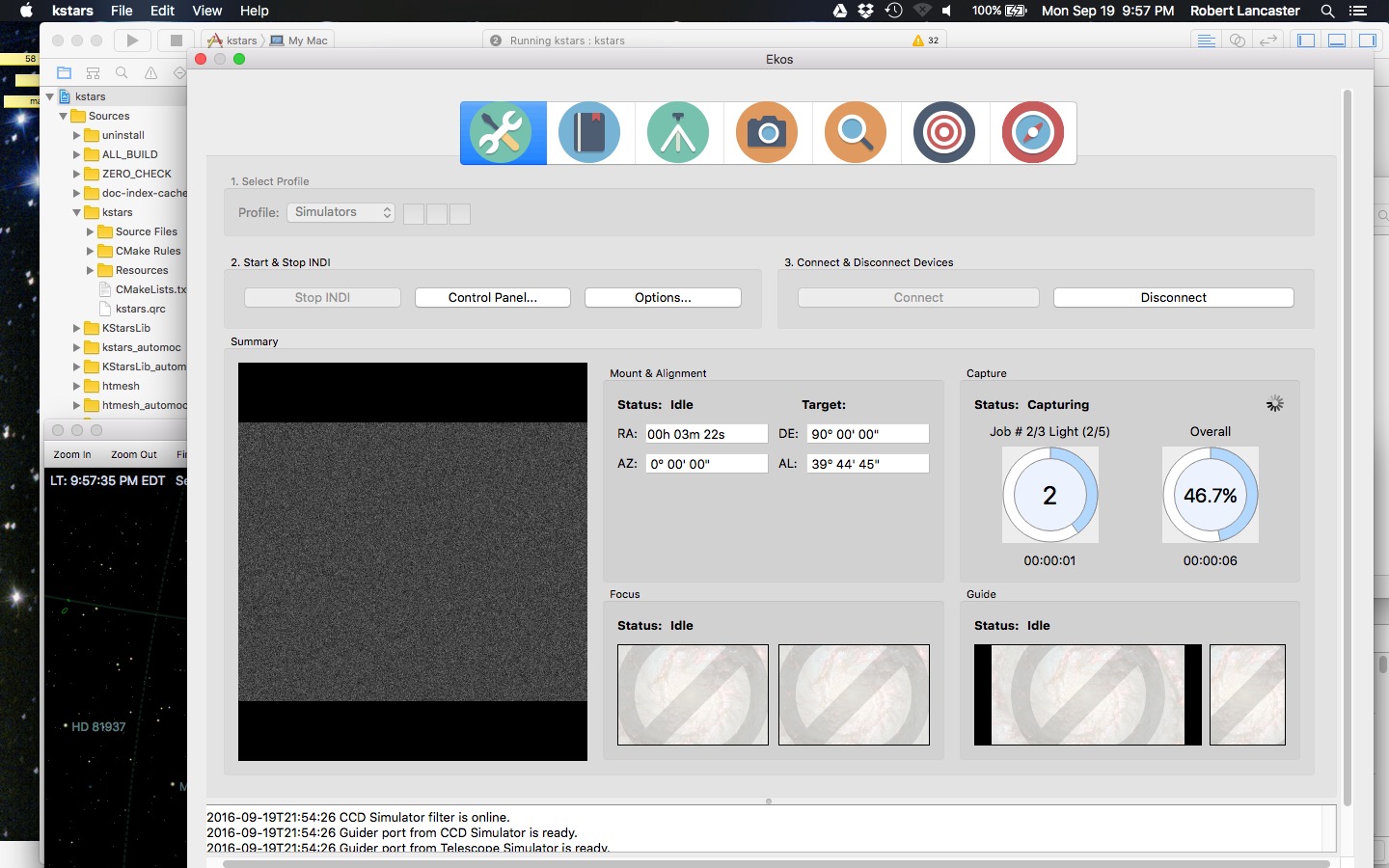 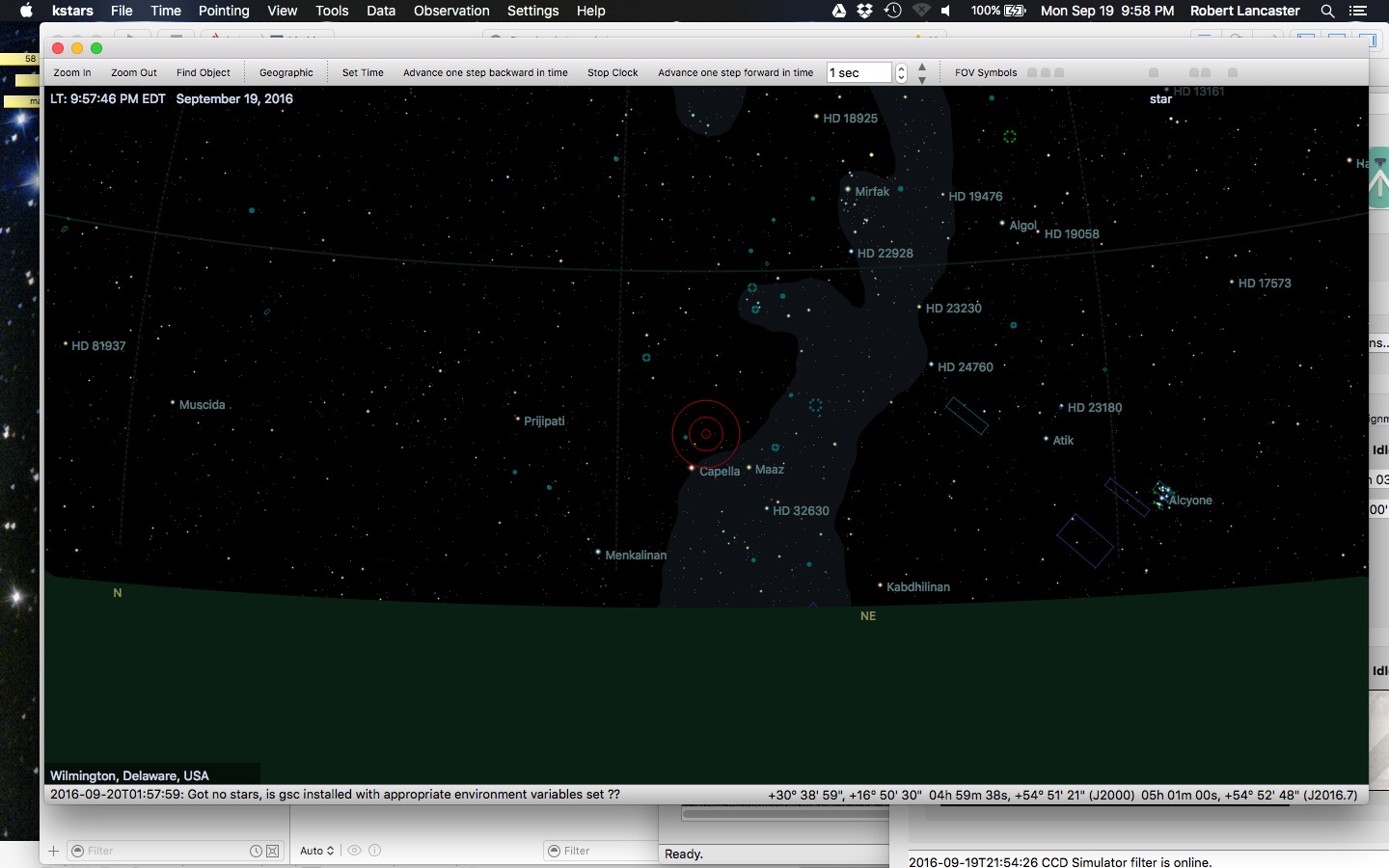 Wow amazing progress! I wonder if this can be be somewhat streamlined to be easy for users?
Jasem Mutlaq
Support INDI & Ekos; Get StellarMate Astrophotography Gadget.
How to Submit Logs when you have problems?
Add your observatory info
6 years 2 months ago #10322
The topic has been locked.
Time to create page: 0.356 seconds
Powered by Kunena Forum
© 2003-2022 by INDI Library. All rights reserved.