still working on the icons and the Add-On Installer. As Adam pointed out before, these were the same things that gave me trouble earlier this summer when I was working with a different Linux operating system. I will still try to solve them, but not tonight.
The following user(s) said Thank You: Jasem Mutlaq
6 years 2 months ago #10387
The topic has been locked.

Sorry for the late reply

Seems you made quite a lot of progress last night (at least it was night for me).
brew install cfitsio solved the cfitsio error, but now it doesn't find libnova and I am sure it won't find the other two packages too

But on macOS 10.12 there seems to be a problem with qt5 as well. It won't compile when doing brew install qt5, which is quite severe as it is needed for all the KDE stuff.
Unfortunately, I don't have a machine with 10.11 now, so I guess I will have to wait for a fix for the Qt issue.
6 years 2 months ago #10390
The topic has been locked.

I did make a bit of progress! I think the folders for building libindi need to be up one more level. Here is a screenshot for you: 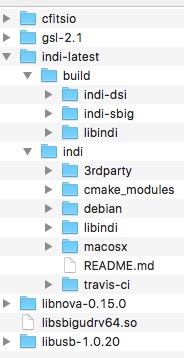 That sucks about qt5, I cannot install sierra on my computer because it is too "old." Maybe it is a blessing in disguise until they get it fixed.
6 years 2 months ago #10399
The topic has been locked.

Thanks for the screenshot, I placed them one level below indeed. It still doesn't find the libraries however. Did you change the cmake command somehow?
I digged out an older Mac with El Capitan now, so I will try it on that one too.
6 years 2 months ago #10401
The topic has been locked.

I did not actually change the cmake files, but if you tried to build and it failed, you should delete everything in the build folder. I found there are problems if you try to do it again.
6 years 2 months ago #10402
The topic has been locked.

I deleted everything in build/libindi/ after the failed build attempts. Did you change the parameters to the cmake command?
Unfortunately, brew install qt5 also fails on 10.11

I think this is the series of terminal commands from my terminal history that successfully built libindi. There were several failed attempts though. There are also several typos in the code below and i had to repeat the commands. You can probably delete those

For Qt5, I was able to do that earlier this summer. I didn't do it recently. it takes hours to build and install!!
6 years 2 months ago #10407
The topic has been locked.

Oh and I don't remember, i might not have installed it using home-brew. It might have been another method. That is the trouble with trying all these different things and then finally getting something that works, you don't remember what all you tried and sometimes you don't know what you did that might have contributed to the success.

Thank you very much though for trying to go through my bumbling set of instructions. I did a better job with the instructions on how to set up a Raspberry Pi with Kstars and Ekos. This I am still trying to figure out myself.
6 years 2 months ago #10408
The topic has been locked.

I have been further investigating the icons problem. For a long time I thought the error would be with trying to load icons from themes because the Linux themes would not be supported properly in OS X. Here is an example in KStarsInit.cpp for the show stars icon.

This is supposed to be "foolproof" because if the theme stuff doesn't work it should use the fallback. But I thought it looked like the culprit, and this was reinforced by the fact that in other places in KStars where the fromTheme method was not used, but the setIcon method was used instead, it worked great. So I spent a lot of time trying different things like just using the fallback or trying to create a theme and set the theme etc. I had no success with that.

Then I noticed something! When you right click on the toolbar that is not showing the icons, in the contextual menu, the icon is present! For example, right clicking on the "Show stars" button shows the icon at the top of the menu. The icon is also present if you decide to configure the Toolbar. That tells me that I have told the system where the icons are properly. (I have tried putting them in enough different places that I would be surprised if it could not find them) But they still don't show up in the toolbar. I think that the toolbars are KToolbars and they are using KIconLoader to load the icons if I am not mistaken. Could there be some issue with kToolbar without a theme being declared? Why doesn't the toolbar just display the icon that has definitely been loaded by QIcon??
Last edit: 6 years 2 months ago by Rob Lancaster.
6 years 2 months ago #10414
The topic has been locked.

So I had one error yesterday when I built libindi from source on OS X. I did not notice it when I built it, but when I tried to build kstars with it in place because it did not flag the error. I was trying to build kstars-bleeding from the git rather than the version from Sean Houghton. And It seemed to work except for this error. It said:

I found that this method was not in the kstars code that I was building but in a linked file from libindi. I saw the method reference in basedevice.cpp in libindi. I also found the method it said it couldn't access was in base64.cpp, which is also a file in libindi so I knew it was there, it just for some reason didn't want to use it. I also tried building in Qt Creator instead of Xcode and got the same weird error. The weird thing was that my original build on Xcode was still working, but none of the new ones were. I tried a bunch of things, but finally just went to bed. Today, I tried investigating the problem again today and I found a solution. If I added the following line

in the libindi CMakeLists.txt in two locations as shown below, and then I rebuilt libindi again, I could build successfully in both Qt Creator and in XCode.

I don't know if adding these lines to the CMakeList.txt is the correct solution, but it fixed the error and now I can build again.
6 years 2 months ago #10423
The topic has been locked.
Time to create page: 0.444 seconds
Powered by Kunena Forum
© 2003-2022 by INDI Library. All rights reserved.