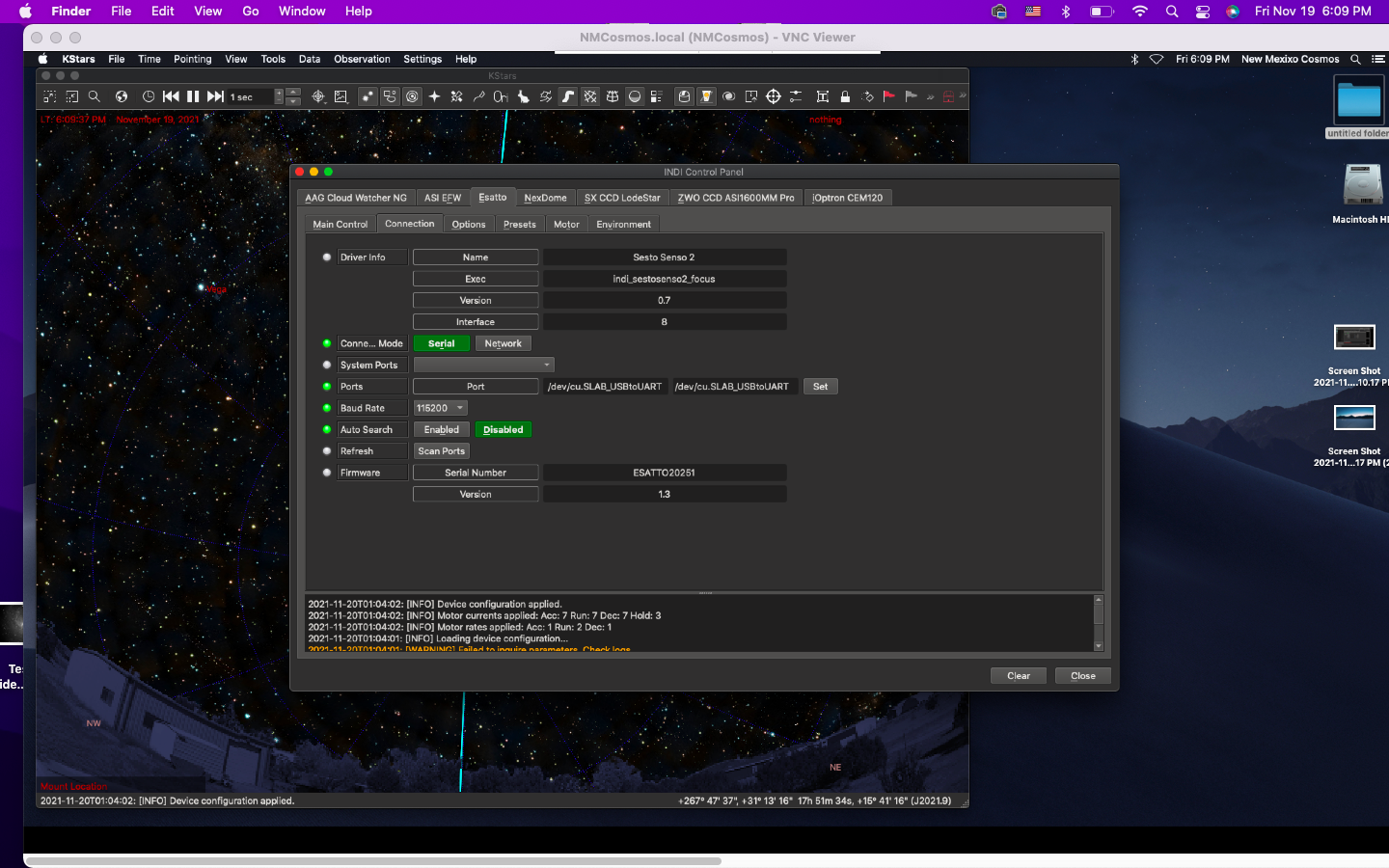 Thank you @Peter Kennett, those are the same versions as I am using. So good news is that it can work. Will have to dig further into why it won't work on my side.
Perhaps one more thing to check: what MacOS are you running? Looking at the wallpaper, would that be Mojave?
I just heard someone else who encountered USB/Serial connection issues popping up when updating to Big Sur, so perhaps it could be MacOS related....
Willem Jan Drijfhout
astroworldcreations.com

Quick update: looks like I've found the cause. Just tried a 2012 MacBook with High Sierra, and it connected like a charm. So it looks like the MacOS version is the culprit.
Willem Jan Drijfhout
astroworldcreations.com

Finally got it all sorted out. It is indeed a MacOS version issue. Anything from Big Sur and onwards uses for these serial-USB drivers so-called Driverkit Extensions. And some devices (e.g. the primalucelab focusers) don't like those extensions. Any MacOS before Big Sur uses Kernel Extensions, which work with the focusers.
So I downgraded my Mac mini to a 2018 model, and downgraded the macOS to Mojave. Then installed the legacy Silabs drivers twice (don't ask me why, but several reports say you need to install them twice, and that is my experience as well. Now the Sesto Senso 2 and Esatto work as they are supposed to: 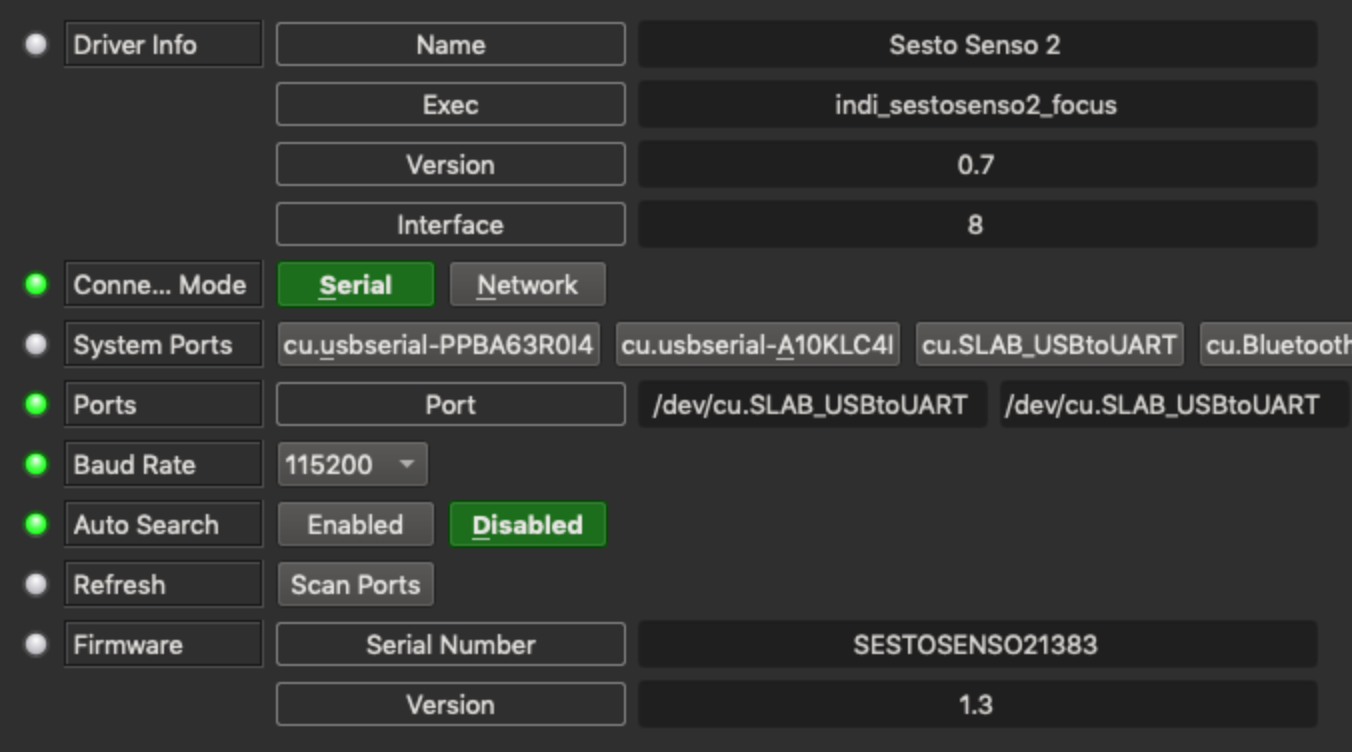 Thank you Peter, your screenshot with the Mojave wallpaper triggered me and when I heard someone else talking about issues cropping up since Big Sur finally directed me to the solution.
Willem Jan Drijfhout
astroworldcreations.com

Ok, so yes as I mentioned before, the driver issue is not really an INDI or a KStars issue, but it is an issue with your actual computer drivers seeing the serial connection, because it is based on the fact that your computer needs USB to Serial adapter drivers in order for INDI to talk to your device.  It is troubling news however that some of these drivers might be blocked from functioning due to a change in MacOS.  I think we definitely will need to look into a solution for that.  Thank you for doing this research!

That being said, I think to help future users, once we figure out which drivers would be needed and how to get around any MacOS issue with using them, that I might either edit the Getting Started document that I made and included in the DMG and/or edit the individual INDI driver pages ( indilib.org/focusers/page1.html ) on indilib with recommendations or maybe even links to drivers that would be required to use the INDI driver with that particular device or USB to Serial adapter.  Would this kind of documentation have helped you?  If so, would it have helped to have the information on the indilib driver pages, or the Getting started document or both?

But I can tell you now that I have no idea which ones are required to work with them, or even which drivers would have an embedded usb-serial adapter.  I also don't know yet a way around the issue with the MacOS change that you mentioned, yet.  I only know for my own machine, as I remember, I had to install the FTDI driver for my Moonlight Focuser and I had to install a prolific driver for my USB to serial adapter I use with my mount.  But I would need to go searching again to find whatever driver I installed on my Mac to get them to work.  I think I would need users who have the devices to tell me what hardware drivers worked for them so I can get the information to post.  But I can certainly look into the MacOS issue with my own devices and see if their drivers still work or if I can find a solution to the problem online.  I usually use my raspberry pi, not my Mac, to connect to the devices, but it is easy enough to try.

Well, I have similar issues with my Baader Steeldrive II and Ekos.
However, it’s working out of the box with TheSkyX.

Thank you Rob, and it would indeed be a great help if we collect the various combinations that work (and don't work) in the documentation. The outcomes will probably be different for the different devices, so perhaps the most logical place would be to add it to the individual drivers INDI-page.
It seems like there are several variables that are relevant:
- the USB to Serial bridge controller chip in the device (focuser, USB>Serial cable, etc)
- the version of the virtual com-port driver (the brand is determined by the chip)
- the macOS version
As far as chips and drivers go, the three main brands that keep coming up are: Prolific, FTDI and Silabs
As far as macOS version is concerned this may be limited to: before Big Sur vs Big Sur and later.
The drivers use system extensions. Before Big Sur these were Kernel extensions, using little system files with the extension .kext. In Catalina so called driver extensions were introduced, making use of DriverKit. Kernel extensions require terminal commands to install and normally you won't see them. Driver extensions install as an app and remain visible as an app in the Applications folder. Catalina introduced Driver extensions. From Big Sur onwards, this was mandatory.
so perhaps we can add an extra line with each INDI driver for which we have the information.

For the Sesto Senso 2 and Esatto focusers this could look like:
For this INDI driver to work properly on a Mac, a separate USB-Serial driver needs to be installed. The legacy Silabs driver version 4.* can be found here . Installation requires macOS 10.14 (Catalina) or lower. So far, it has not been possible to establish a proper connection using either driver version 6.* or macOS 11 (Big Sur) and higher.

For the Microtouch focuser (based on another thread on this topic), it could look like:
For this INDI driver to work properly on a Mac, a separate USB-Serial driver needs to be installed. The latest Silabs driver can be found here . This driver has shown to work on macOS 12 (Monterey) and is likely to work on 10.14 (Catalina) and 11 (Big Sur). For older macOS version, the legacy Silabs driver may be required, which can be found here .

Even so, it would be good to know from people who have no problems with focusers and their Macs, for which it could look like:
For this INDI driver to work properly on a Mac, no separate USB-Serial drivers need to be installed. The required drivers are embedded in the macOS. This has been tested on macOS versions .....

Finally it looks like most issues occur with focusers and USB-Serial cables, but perhaps there are other devices as well? USB-serial cables probably have an infinite amount of manufacturers. But they probably all use one of the three chips. Perhaps we could create a general sentence on USB-serial cables, and point people to the three drivers mentioned. We could add that sentence to the devices that have a traditional serial (DB-9?) interface.

Just a few thoughts, Rob. Happy to help further where I can. I've got a Monterey and Mojave setup that I can use. But only have the Primalucelab focusers as hardware that I can test.

Without more info I couldn’t tell you.  I don’t have the sky x and they are a proprietary system. I don’t know if they have a different way of communicating with the focuser or if somehow they have a built in usb serial driver in their software.  I also don’t know about this specific device or the INDI driver.  Perhaps one of the authors of this INDI driver would know or maybe someone who has the sky x and this device could look into it or ask the company that makes the hardware or the makers of that software.

I do contribute to KStars and INDI.  I build the Mac version, make some contributions to the software, and I have fixed a couple of problems with INDI drivers for macs a time or two.  I also made an INDI driver once.  But every device and driver is different.
The following user(s) said Thank You: Oliver
1 year 2 months ago #78124

Thank you for all those details.  Yes that is the same set of issues that I would have, that I only have experience with my own equipment and what works on my system.  And yes very much there are a large number of different possible drivers.  But yes you might be right that there are really just a small number of usb serial devices that just get reused in different devices and that might make things simpler.  But all this is why INDI and KStars are very much a group effort. And all these kinds of contributions are very useful.

so yes I think if we can start gathering this kind of information then we can revise the documentation to include it as you said.  I think we definitely should include a short set of instructions in my getting started document to point the folks to the INDI driver pages and then on those pages include the latest info for each device.
1 year 2 months ago #78125

Sounds good. If there is anything I can help with, please let me know. As you say, it's a group effort.
Willem Jan Drijfhout
astroworldcreations.com

If you follow the link you’ll see that TheSky is using the same USB driver as Ekos.
indilib.org/forum/focusers-filter-wheels...i-won-t-connect.html

The Baader driver is maintained by Jasem.
However, I don’t think that he could help because it is a Mac issue.

I could easily get the USB driver for my device and maybe it’s working.
But I don’t want to install unnecessary external drivers that have to be maintained and probably brake compatibility with one of the next MacOS iterations.

This issue is back again, as the work-around (use macOS Mojave) does not work anymore for KStars 3.6.0. Is anyone else having this problem? Rob, do you have any suggestions how this could be fixed?
Willem Jan Drijfhout
astroworldcreations.com