Internal Guider Changes--please read if you use it

Two nights ago, when I had tested the new version, I had put my guide camera in 2x2 bin mode and forgot to set it back.  During that session, I had some really weird (and bad) guiding errors.  Guiding would be great, until suddenly it would start to oscillate: 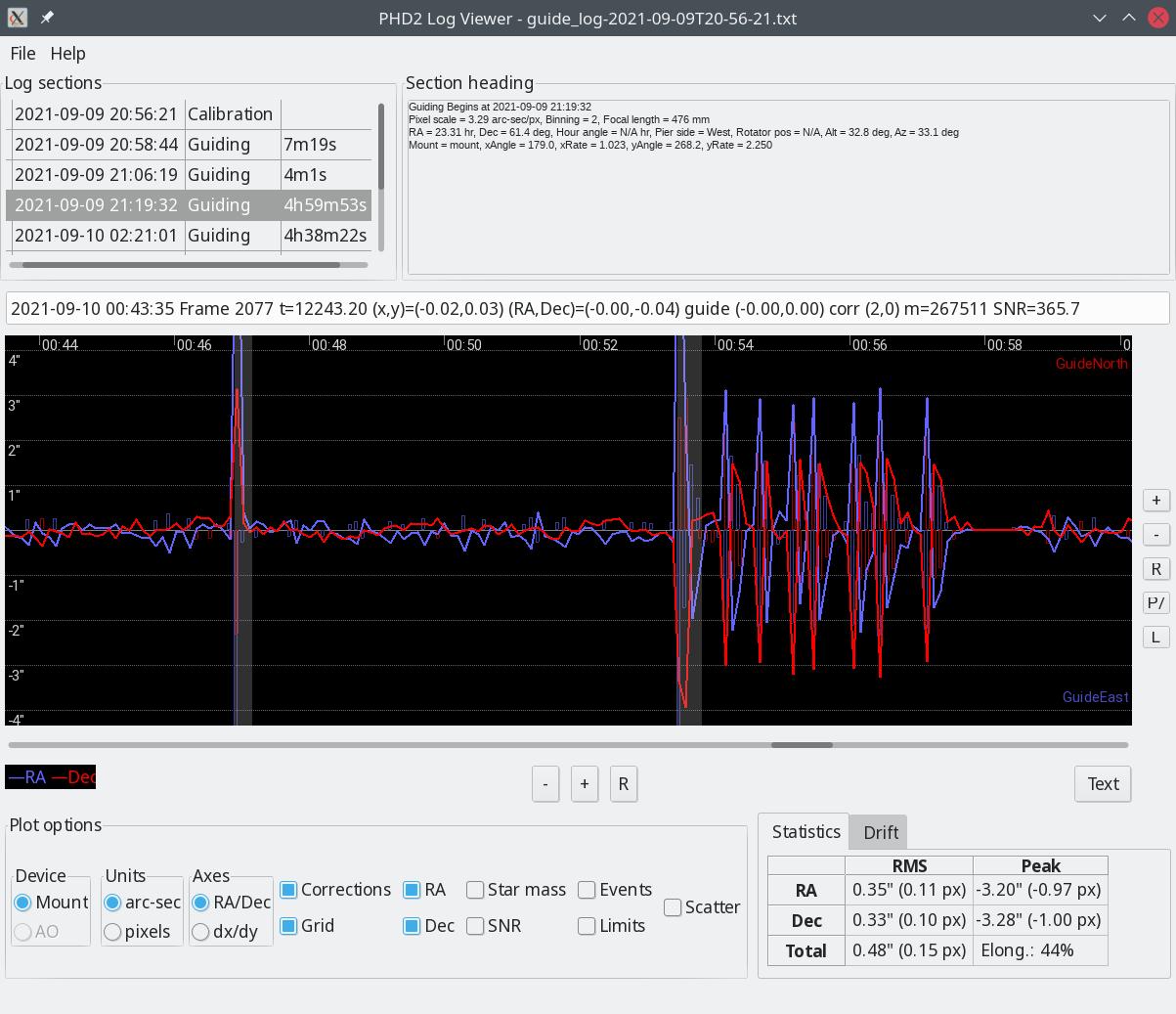 Those excursions came back several times (roughly half an hour spaced), so I assumed there might be something with the belt of the RA axis.
It went away after the meridian flip.
Last night, I got a similar behavior right from the start.  What I had noticed was that the jump/error was about 3 arc sec, which is the (binned) pixel size of the guide cam, and RA and DEC were basically in anti-phase... that really looked artificial to me.
I switched back to 1x1 binning, and the problem was gone.
Now I wonder if anything in the code could trigger such an error, or if maybe the binning algorithm is unstable somehow. Or do you have other ideas?
This is an ASI1600MM.  I use multistar SEP/guide profile and GPG.

Edit:  The example shown started the oscillation after a dither.  But there's other instances where it started during normal guide operation.
The main log file doesn't show any messages (but logging was 'normal')
openSUSE Tumbleweed KStars git INDI git
GPDX+EQMOD, CEM60EC, ASI2600/1600/290mini+EFW+EAF
Last edit: 2 months 2 weeks ago by Peter Sütterlin.
2 months 2 weeks ago #75415

There is one "comical" thing I noticed. The "target" drift plot and the drift graph are inverted with respect to RA. That is, if one of those says the latest RA drift is 1 arc-second West, the other will show -1 arc-seconds (or 1 arc-second East). The guiding itself works fine, this is a display issue, not a guiding issue. I would fix it, but I don't actually know which one is right. I suppose I could trace through the code and see which makes more sense, but if you know for sure, please let me know.

I did a little testing. I started guiding, but disabled the guide pulses, so that I could just graph the tracking error.

I went to the INDI control panel, and sent a 500 ms North pulse for Dec. The guide plot, and the bullseye target both moved to the North. I ussed 500 ms South pulses, and the target moved to the south.

So I think the bullseye target is correct, and the graph is wrong.

Kevin Ross post=75204 userid=4509
Overall I am very pleased with these changes, this seems to be a move in the right direction. However, I have encountered a few issues, none of which are show-stoppers, just minor annoyances.</em></em> Kevin Ross post=75214 userid=4509
2) I tried to set binning to 2x2 and then switch to another tab, and then switch back to the guide tab. When I did that, I saw no issue--if I set it to 2x2 in guide, then moved e.g. to the capture tab, then moved back to the guide tab, it still displayed 2x2. What exactly do you do to expose the issue? Can you re-create it with the simulator and describe specifically what you did? Are you setting binning before you start guiding, or during guiding when you see the issue?
Jasem says he made a fix for this, I'm building KStars now and will test it out later.


Sorry folks, I was away for two weeks and couldn't reach the forum meanwhile.
I wrote the little patch to save the binning value for guiding.
The idea was to handle the "guider binning"  independently from the "indi control panel" parameters! This way - I thought - it is possible to use the camera either directly as an imaging camera with the "native" binning (set in "indi control panel") or as the "guiding" camera with the binning settings in "ekos guider tab". There is one restriction however: In case of the presence of a "guider head" in the "indi control panel" the binning settings are overwritten with the value of this tab. This is in accordance with the already existing programming logic.
So what happened to Kevin is exactly that: Because the "simulator camera" has a "guider head" the value of the binning set in there overwrote the binning in the ""ekos guider tab". Of course the flaw of the patch was, that it didn't reset the value to the guider head value immediately. In addition there wasn't (and still isn't!) any information given to the user about this "guider head" feature.
IMHO the question is now the following: Should the feature of a "guider head" be preserved or should it be abandoned?
I'm looking forward to get some feedback.
AOK Skywalker DDM
Celestron Edge HD 14"
Starlight Trius SX35
Starlight Lodestar X2
Starlight SX Maxi Filterwheel
Focus Boss II Focuser
KStars Ubuntu 20.04 LTS on NUC

Hi Kevin,
I was wondering how to visualise and record a PEC file on a Mac and your screenshot gave me the answer :
1/ in the EKOS guide panel, "guide" with the RA + DEC directions unchecked
2/ in the INDI Control Panel / Scope / Motion Control / Record
Thanks
2 months 1 week ago #75671

I don't think that will work, because it isn't sending any guide pulses to the mount to record. Unless I'm misunderstanding.

What I think will work is to use GPG guiding for several worm cycles. That should be enough for it to characterize the PE of your mount. Then in the settings, change the guide aggressiveness to 0. Change the GPG control gain to 1. I think that will disable guide output for errors, but will continue to output what it learned via GPG. Then record the PEC in the mount. I don't know for sure if that will work or not, just a thought.

I don’t know if it is related to new guider but I am seeing occasional exposure timeouts on my guide camera (ZWO ASI290mm mini).  This freezes the whole process for a minute or so.  I have not previously seen this.  Running kstars/ekos 3.5.5 on Ubuntu 20.04.  The exposure timeout correlated with dark subtraction ceasing to work properly.  It was working fine, camera timed out, after camera and guiding returned the dark subtraction was resulting in loss of stars and I had to disable it.  It’s unfortunate as dark subtraction improved guiding to 0.65 arc second rms from 0.85, at least hat was the effect tonight.

Thanks for the report Thomas.
Could you please do me a favor and re-post as a new thread, with the topic something like "Dark Subtraction seems to freeze guiding" and a log?
My changes should not have affected the dark processing pipeline, of course anything is possible, but I think it would be best looked into from the dark-subtraction point-of-view.
Hy
Orion Atlas Pro, William Optics ZS105, Moonlight V2 focuser, GSO RC10 w/RSF focuser
ZWO ASI1600, Astronomik Filters, ST80, QHY 5L-IIm guidecam.
KStars/Ekos/Indi on NUC10 & RPi4 w/SSD -- Ubuntu
Projects: Terrain, Polar Align, Analyze, Linear Focuser, SEP MultiStar & GPG Guide, FITS autostretch.
2 months 1 week ago #75732

I believe the timeout problem is unrelated to dark subtraction as I also experience these timeouts although I never use dark subtraction. I reported the problem here indilib.org/forum/ekos/10329-sequence-qu...t-of-step.html#75373
The following user(s) said Thank You: maxthebuilder
2 months 1 week ago #75739

It could well be the dark subtraction problem and the camera timeout are unrelated and just happened to coincide. I started a separate thread and included some log info per Hy's request. I did not get another freeze last night so I don't have a verbose log at this point.
Borg 107FL, Astro-Tech AT130EDT; Rainbow Astro RST-135 SkyShed Pier; QHY600PH Chroma LRGBHa; QHY5-III-462C; IR Guiding WO Uniguide 50 & ASI290mm mini; ASUS PN51 ubuntu, kstars/ekos, & firecapture; Pegasus PPBA; Stellarvue Optimus + WO Redcat, Skyguider Pro RT90C, rPi4/stellarmate
2 months 1 week ago #75753

The timeout issue is unrelated to darks, two separate issues. Perhaps timeout is more important. Can you test guide looping? Does it timeout after a while?
Jasem Mutlaq
Support INDI & Ekos; Get StellarMate Astrophotography Gadget.
How to Submit Logs when you have problems?
Add your observatory info
2 months 1 week ago #75785

What do you mean, "guide looping"? I do guide all night long and the "guide cam timeout" occurs several times during a night. It does work for hours and then out of nowhere the guide cam hangs. Once the main cam light frame is received, guiding is restarted and works for hours again until the timeout suddenly occurs again, without any user activity.
Last edit: 2 months 1 week ago by Alfred.
2 months 1 week ago #75898

I don't know if this has been discussed in the past, but would it be possible to separate guiding from the rest of Ekos so the guider could run on a separate machine. In my setup Indiserver runs on a Rpi on the mount, while Kstars/Ekos run indoors on my Mac. The problem is that guide images need to come from the Rpi to my Mac. With multistar guiding it would be difficult to limit the amount of data transferred. So, a lot of data transferred during an imaging session is guiding related, which I suspect is responsible for comms related issues in my setup. There is also the delay to guiding whilst the most recent guiding image is transferred; which encourages me to lower the guiding interval to compensate (which probably makes the issue worse).

(I'm aware this can be done with PHD2 but would prefer to use the internal guider).

For most convenience the guiding gui would still be part of the Ekos gui, just the processing engine would need to run a server process deployable to another machine.

I've seen a few posts on IndiHub recently; this could be a good addition for this product.
The following user(s) said Thank You: Alfred, Bruce
1 month 4 weeks ago #76247