Over the past couple of weeks, I made some massive changes in my AstroPi3 setup scripts.
github.com/rlancaste/AstroPi3

I added additional capabilities, removed some outdated items, improved on some others, and improved the documentation a bit. I made a brand new version of the script that is capable of installing everything and setting up a Pi running Raspbian, which I made specifically with the Pi4 in mind, since ubuntu-mate is not released for it yet. There are 3 main scripts:

There are other scripts included just like there were before with desktop shortcuts for installing index files, configuring udev rules, etc etc.

I ran them and ran them over and over on 2 Raspberry Pi 3bs, one Raspberry Pi 3b+, one Raspberry Pi 4, and one Odroid C2 until I was pretty satisfied I had worked out most of the bugs, except for the Rock64 which still has display issues on VNC. (I did this when I first made them too, but things change. . .) If you have a fresh image of Raspbian or Ubuntu-MATE, you should be able to run my scripts with no changes ( I hope) and get everything mostly setup with one simple script. Of course, if your system is different, you might have to remove or change small parts of the script. One of the things people have found most useful is using the scripts as a guide to set up their own scripts or to set up their system manually.

Hopefully this helps you! Have fun!! And let me know of any issues. 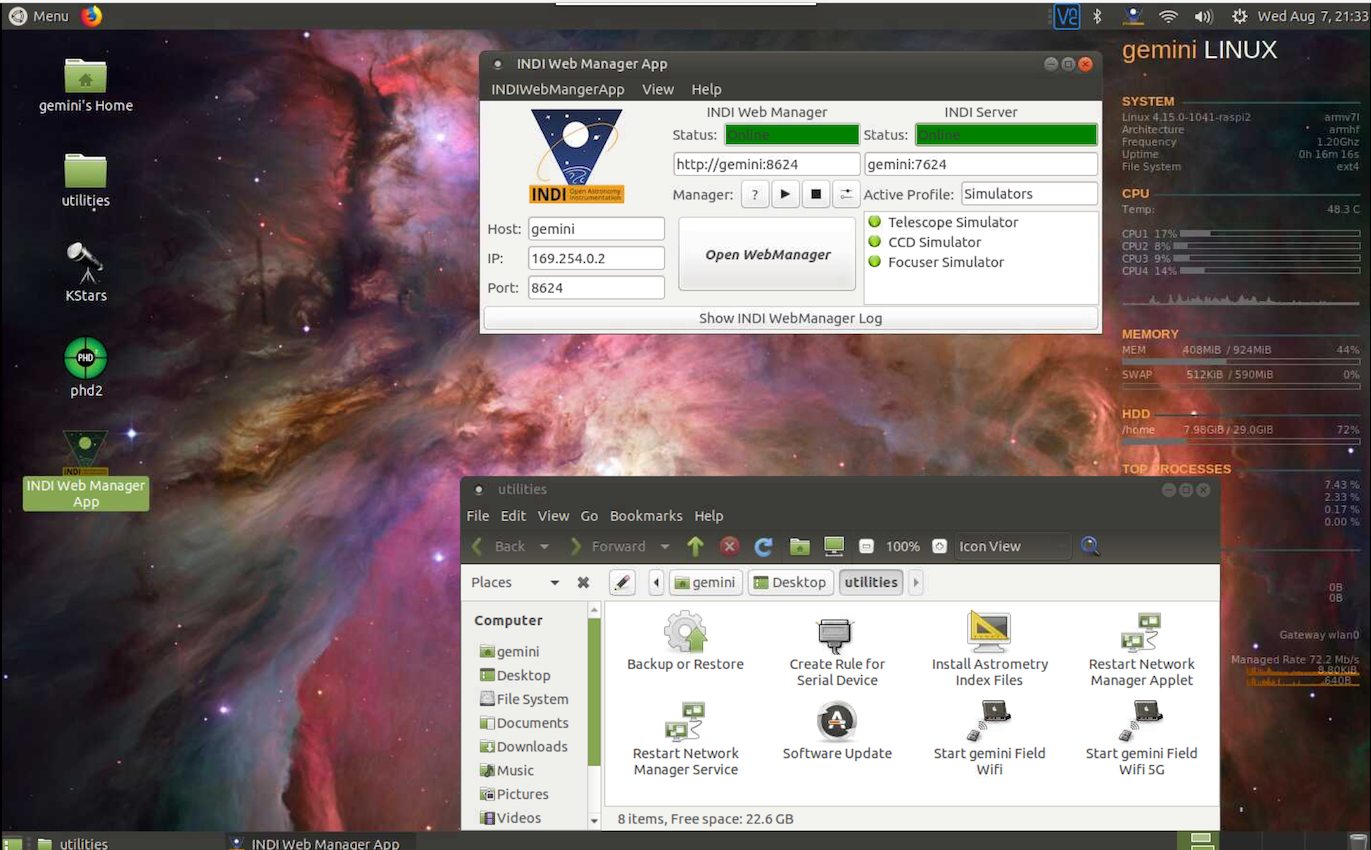 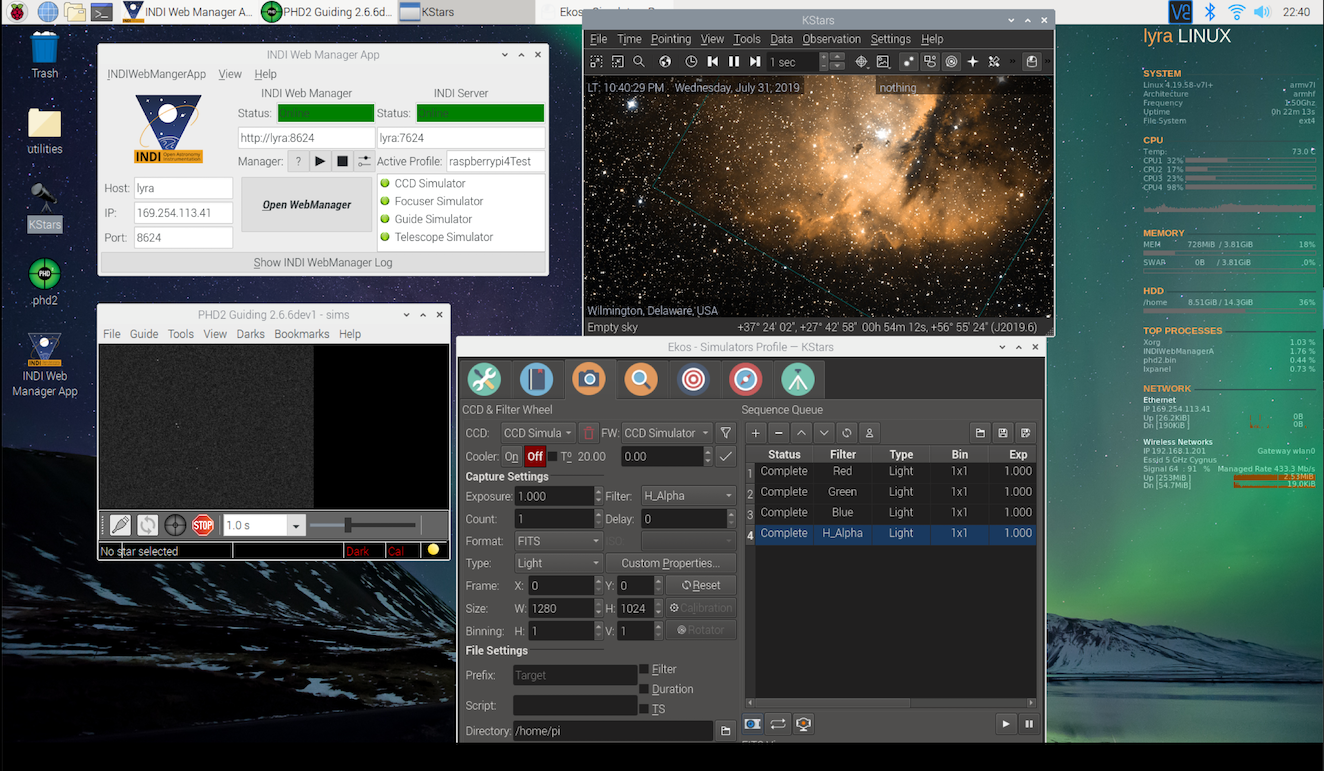 Hi,
I tried this script and I have two issues
1. When setting the static ip on eth0, the WiFi will then not connect to the internet, if I disable the static ip on ethO it works..not sure why..
2. Secondly and most importantly this script disables the 4K options on the rpi4, so when installed and running on my 4k monitor everything is massive, and there are no 4K resolution options in the lists anymore, as there is in raspbian buster before the script, the highest res with this script installed is full HD 1920 x 1080.. Any ideas on this one..?.

But thanks for all the hard work..

You don’t need a static ip to connect with network cable in the field, this works without one, so not sure why this is in there... maybe it could be removed..??

Hi Rob,
Took a few attempts to successfully apply your script (./setupAstroRaspbianPi) on my Raspberry Pi 4 4G. Not due to your script I hasten to add, but due to download stalling at various times including when cloning Indi when I had many warning messages, and especially cloning kstars which hung completely on two separate attempts last night. The version I am running successfully completed as far as it did but stalled on attempting to download and install the GSC.
Many thanks for your detailed work!
Currently running KStars/Ekos/Indi on two Raspberry Pi 4Bs 4GByte under Raspberry Pi OS thanks to Astroberry
Two mounts, two Fracs, a Newt and a Mak and a couple of OSC cameras.
3 years 3 months ago #41894

The adding of a static IP is an optional item. It asks you when the script runs whether you want to set that up or not. Did you choose to create one? Some people might like to do that, and some might not, so I purposely made it ask you during the script.

The reason that I added that feature is because when you are in the middle of the field and there is no wifi, no router, and no internet, you can directly connect your computer to the PI with just a simple ethernet cable. Since there is no DHCP, the PI would not get an IP address unless it is self assigned. Your laptop also gets a self assigned IP address. These two addresses have to be in the same range in order to talk over the ethernet cable. For mine, they both must be 169.254.0.xxx since that is what my computer does by default. This is very important because it is my backup method of connecting to my PI if something goes wrong with wifi. I also tend to use that to connect to it at first in order to connect it to a wifi network when I bring my pi someplace. So I added this to make sure that the pi keeps that address fixed and running on ethernet for when I need to plug in my cable. In previous versions of the script, I had put it into cmdline.txt, but I found that sometimes after awhile, it would drop that connection. Also it sometimes caused the PI to delay startup because it was waiting for the network. In the new version, I put it in as a virtual network so that it shouldn't prevent ethernet from working with DHCP if you connect it to a router, but it will still keep the static IP running in the field if you need to connect to your laptop. At least this is my reasoning, have you found that this isn't true anymore?

As to your second point, for the resolution. When no HDMI device is connected to the Pi with its default settings, it will get a resolution that is crazy over VNC, something like 800 x 600, which isn't 4k, nor is it HD resolution. In the file config.txt, there are several settings that you can change that will allow you to get the resolution that you like. hdmi_group, hdmi_mode, and dtoverlay=vc4-fkms-v3d. Please read my comments in this file github.com/rlancaste/AstroPi3/blob/maste...upAstroRaspbianPi.sh for more information. Note that whatever you set will give the PI a fixed resolution. The settings that I chose will give you a headless resolution of 1440x900 because I found that to be nice on my monitor. If you want to change that to have a higher resolution, you can chose one of the other modes like maybe hdmi_mode=80? You can find all the modes here: elinux.org/RPiconfig. Or you could enter the exact screen resolution that you want by entering framebuffer_width and framebuffer_height instead. Note that if you don't find my solution to work at all, you can also disable that part of the script entirely if you like, but from what I have seen, you won't like the resolution you get.

The warning messages when building software like INDI and KStars is completely normal. You don't need to worry about them. They are just messages for the developers to help them make things better (though sometimes the messages are incorrect and the changes would NOT make it better) If you are getting warning messages during the downloads, that is a different story. Were you having internet connection problems? If it does get hung up or there is an issue, you can just run the script again. It will not hurt anything to run it many times. In fact, for a number of parts of the script, once it has done that thing once it won't need to do it again so that part will take less time.


Thanks for the reply..
But, firstly my point is that the rpi can connect direct to another PC with Ethernet cable without the need for a static ip, just plug the cable between and it works straight away, and had done this way since the 3b+, so just not sure why you include the option at all when not needed, if I put a static ip on and then connect with a network cable it knocks out internet on the WiFi, if I was to use it this way back home.

Secondly I have no options of 4K at all, not just headless, I have it connected to a 4k monitor...and even if I could set the 4K as you suggest, (but can’t) there is no VNC available that will work with 4K, other that XRDP, (Remote Desktop) as that creates a separate desktop rather than duplicate...which I now have loaded.

There is an actual resolution setting in the preferences tab on the PI4, but all the 4K res options have gone after running the script, with the PI4 there should be no need to edit config files anymore, as it can be done at GUI level..that was my point, just not sure why the script knocked out all the 4K options from there...

I am not being critical at all, it’s an excellent script and worked well, but you did want feedback..

The link you posted with all the screen modes, is not up to date for the rpi4, there are many more including the 4K options, and these are now missing after the script is installed, thismis my point, it’s like it’s put it back to the rpi3b+ settings as far as the resolutions go, so although I can change via the options you have, there are no 4K options there anymore to change too, I hope that explains my issue better...
Stellarmate OS on Raspberry pi4b
Skywatcher EQ8 pro, on steel pier
Takahashi FSQ85, FS60cb & Meade 8” SCT (de-forked)
Starlight Xpress SXVR H18, SXVR M25c, Lodestar x2 Guide Camera
Pegasus Ultimate Hub V2 for all USB & Power
Pegasus focus motors on all scopes
3 years 3 months ago #41908

Unfortunately, like Avocette, it doesn't seem to work for me.
Installed Raspbian since Ubuntu is not available for RP4 and tried the script. Although my internet connection should be stable I get a lot of error messages for EKOS and INDI.
Most of them are telling me that files and folders are not found or downloads are not possible. I still have a few things to try and will inform you if I get it to run.

"But, firstly my point is that the rpi can connect direct to another PC with Ethernet cable without the need for a static ip, just plug the cable between and it works straight away"

This only works if either a DHCP server is available somewhere on your network , you have a static address defined in the Wired Ethernet settings or you have connected via the Ethernet(wired) before and the lease time provided by DHCP that you originally connected to hasn't expired - the latter should fail but I have noticed this does work sometimes.

This is standard networking, be it Windows or Linux

Sorry Michael - Avocette here - Rob's script does work!
He has explained that those warnings are not terminal to the applications!
My RPi4 is now driving my astronomy kit very well with kstars, ekos and Indi library after running the script 'AstroRaspbianPi'. I can use VNC on my iPad for headless control of the RPi4 out in the field and SkySafari 6 plus on the iPad to steer the mount.
Currently running KStars/Ekos/Indi on two Raspberry Pi 4Bs 4GByte under Raspberry Pi OS thanks to Astroberry
Two mounts, two Fracs, a Newt and a Mak and a couple of OSC cameras.
3 years 3 months ago #41913


Well I am sorry but I have connected my rpi3, b+ and 4 hundreds of times direct to a PC without a static ip and never had an issue, the only thing I will say it that was with Stellarmate 90% of the time, so maybe that makes the difference...