Guiding does not resume after meridian flip but capture continues

I bumped into a new problem last night. (Second night for me with the new version Kstars Stable release 3.5.5 and Stellarmate 1.60 on a Raspberry Pi  ).

I ran a job of  150 exposures and after 89 exposures it triggered the automatic meridian flip but did not resume guiding thereafter though the exposures continued.

According to the analyzer (see attached screen) slew and alignment were successful after the flip and the exposures were continued but the guiding did not resume. The graph does not even show an attempt to start guiding. And looking at the images taken after the flip the guiding was in fact off.

Did the logic of the scheduler change here in the new version? I used the scheduler for the session but did not select any of the steps like focus guiding etc at the left hand side of the screen as I followed these steps manually before starting the job to monitor what happens. I used to do it like this before but so far guiding always restarted after meridian flip and in case the resume of the guiding failed it did not resume the exposures and aborted the job.

Now it looks that there was no attempt to start the guiding but still the exposures have been resumed. The job continued to the end, mount was parked. So somewhat all good except guiding was off.

Earlier the same evening in another session I took some exposures without the scheduler to test another optic on a different object. This included a meridian flip and the guiding resumed with no problem.

Any new parameters that would have to be set in the new version when using the scheduler or was this just a glitch? 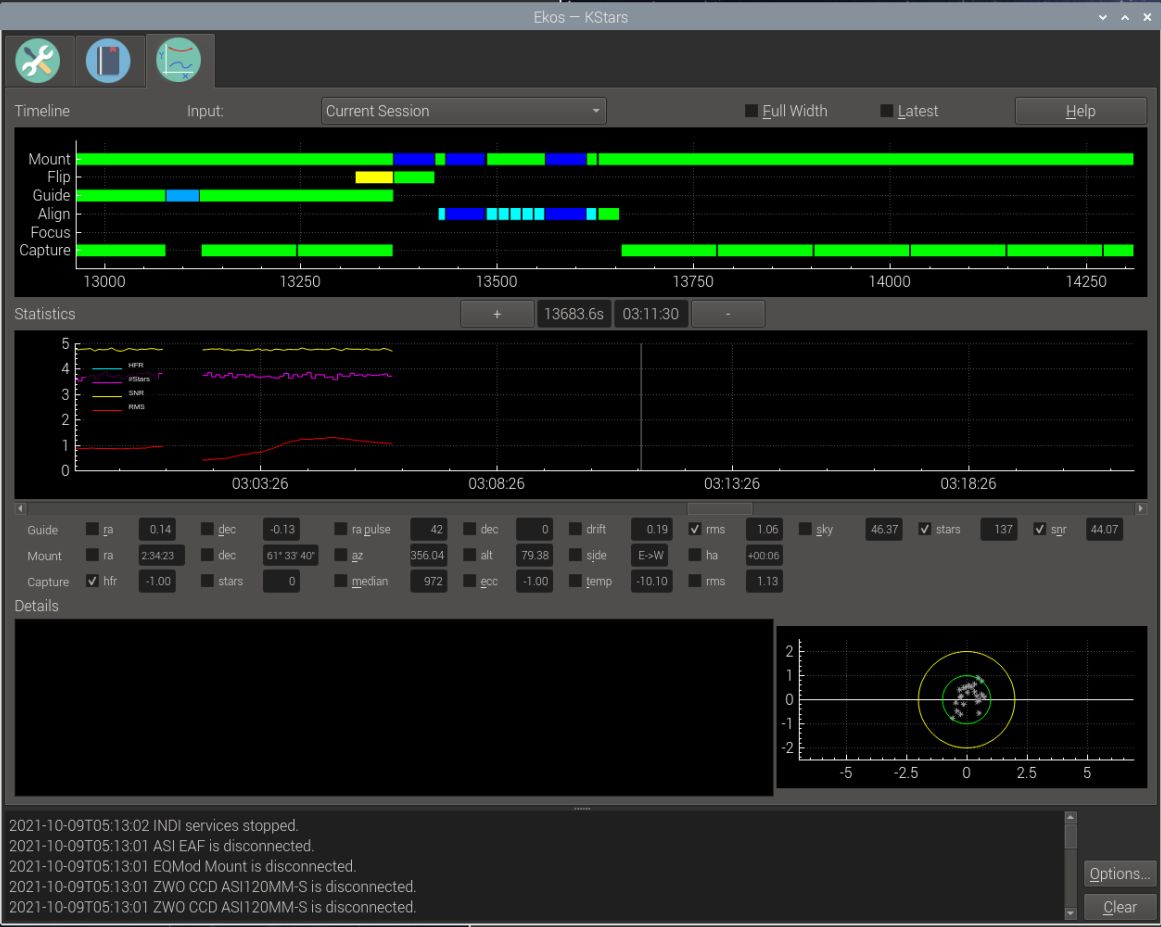 Thank you for taking the time to look at the logs.

No Ekos logs? I see Analyze + PHD2 logs, but not the Ekos logs.
Jasem Mutlaq
Support INDI & Ekos; Get StellarMate Astrophotography Gadget.
How to Submit Logs when you have problems?
Add your observatory info
1 month 2 weeks ago #76569

My logging is set to verbosity "Regular", the log directory which is linked in the logging dialogue is empty. The files that I attached have been fetched from kstars->guidelogs and kstars->analyze. I used the internal guiding, so the guidelogs are not based on PHD2. I hope this helps.

If other logs would be better to analyze if this is a general issue I might need to change the settings for a future session (advice what to active would be great). If there is another log file on this machine that might have been active outside the kstars directory I would need directions as I'm not familiar with the OS.