DeepSkyDad FP1 driver is included with libindi >= 1.9.0 Under Ubuntu, you can install the driver via:

Making flats can be quite cumbersome, especially if you stride towards automation and simplification of the process. Our flap panel makes making flat frames with your refractor telescopes part of automated routine, without hacks like LCD screens, sky with T-shirt etc.

While you image, flap panel is neatly tucked away next to the refractor tube. When you finish imaging, you simply close it up and turn on (dimmable) LED light. You can adjust the brightness according to your camera responsiveness/gain settings and different filters.

But that is not all! For those with high humidity conditions, we are also offering an optional accessory – built in heater, which keeps dew at bay. So you do not need an extra heating strip. You may set pre-defined presets for common LED brightness values positions in the Presets tab (depends on camera/telescope): 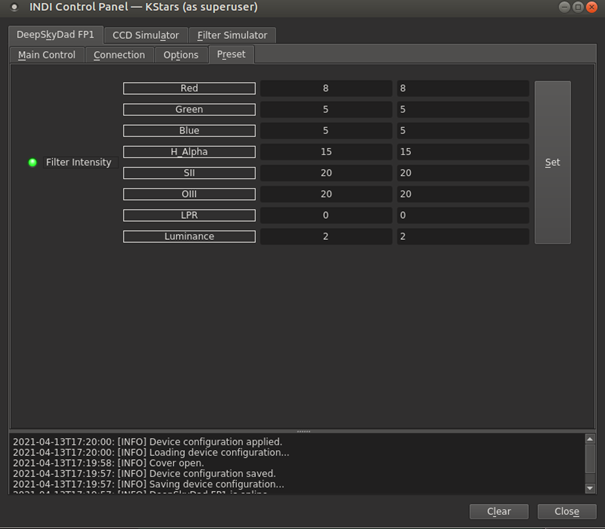 After establishing connection to the flap panel, you can use the flap panel control in the INDI control panel directly to open/close the panel and turn LED on/off Alternatively, the flap panel can be used in any INDI compatible application.