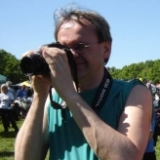 Hi,
I use Canon EOS 6D to take astrophotos. I have always like the Canon's internal temperature sensor at tag E47. Gives the temperature of the camera body in degrees Celsius. With that I can rename my image files and have the temperature as a part of the filename. When calibrating with darks I can get a much better match in temperature.

I do it like this with Irfanview when I rename the filenames:
www.astrofriend.eu/astronomy/tutorials/t...rame-dslr-canon.html 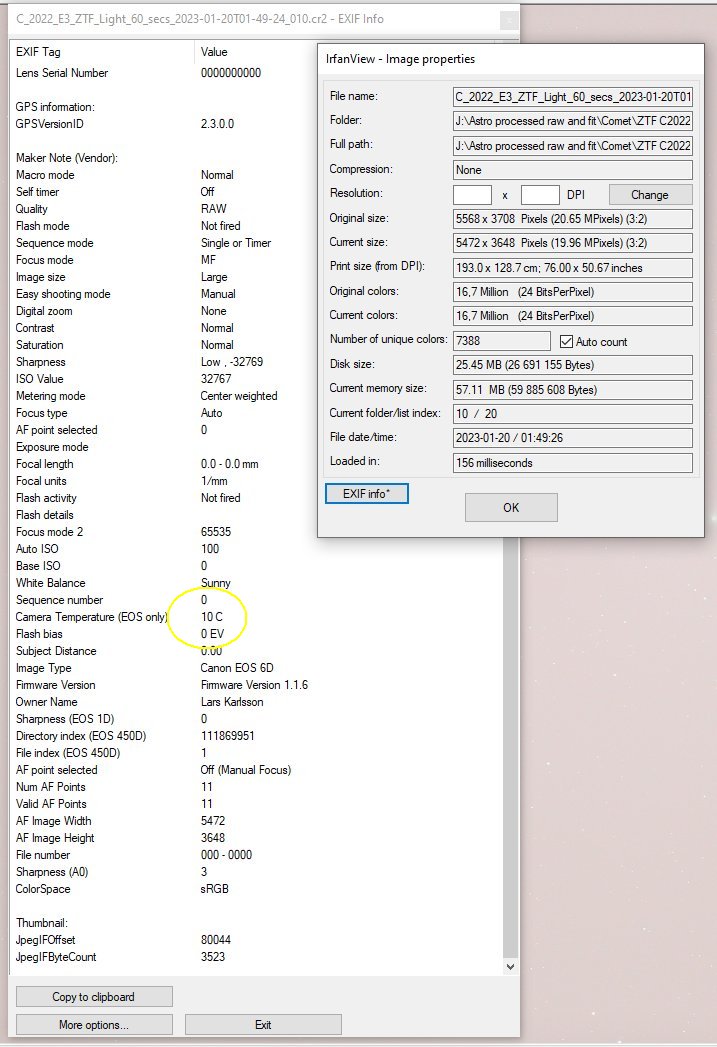 I have the display and liveview disabled.

Any idea if Ekos control the camera in a different way ?

Lars created a new topic ' Custom Tracking Rate' in the forum. 2 weeks ago

Sorry if I ask this question again, but I asked it the Astroberry section and haven't got any answer. I think it's better to asked it here in the Mount section. And I have more information now.

The problem I have is that I'm trying to take photos of the comet C/2022 E3 ZTF and now in January/February it's moving fast. I want to take many longer exposures and need to have the mount track with a Custom Tracking Rate.

First, from the CdC I get the comet's relative speed, but it's in hour and I need arcsec/sec for INDI EQMOD driver. 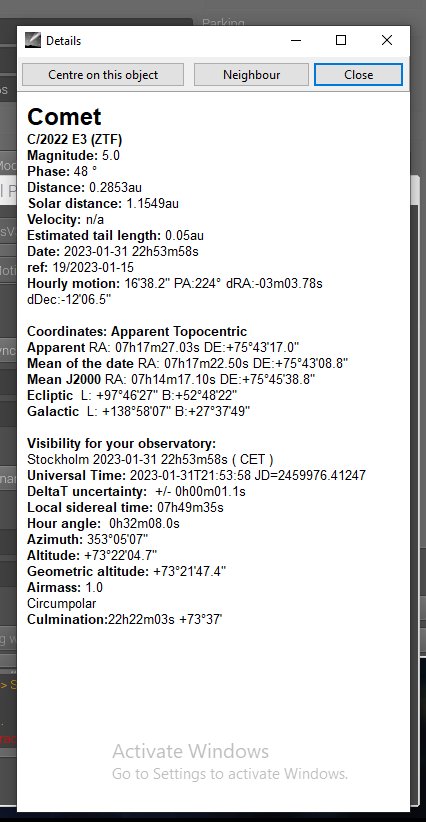 On my homepage I have done a angle format calculator:

Which deliver this setting for the comet's speed in arcsec/sec at January 31st which I think is correct calculated. 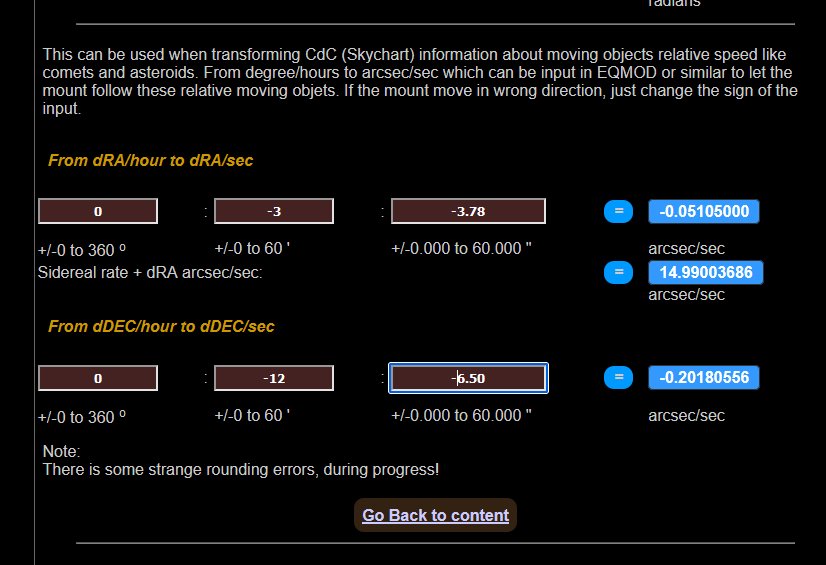 I take these figures and setup the INDI for Custom Track Rates, dRA and dDEC. But I get a warning that these figures are out of range and it don't accept it. 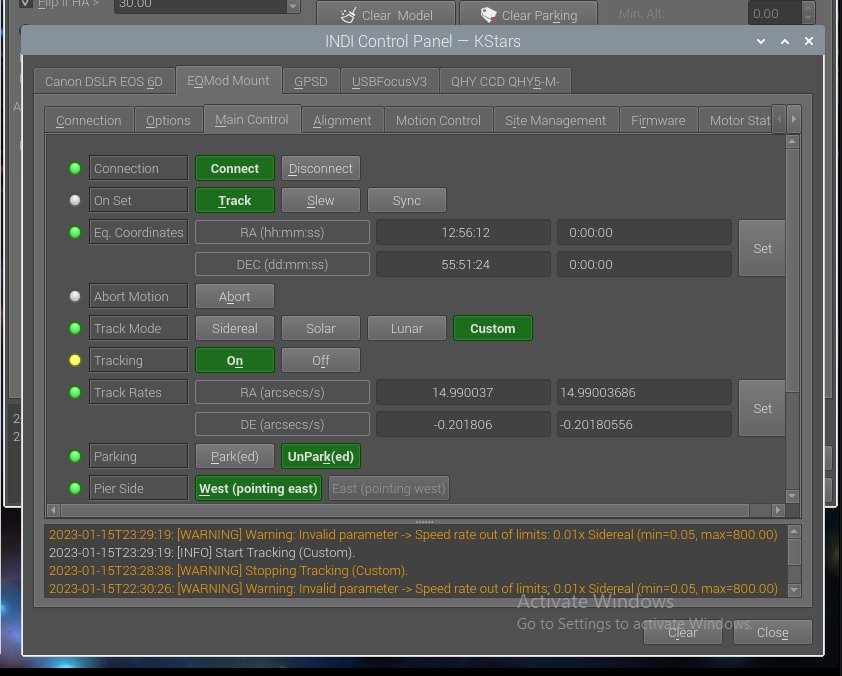 With these range limitations it's impossible to correct for comet's relative speed. Isn't the Custom Track Rate meant to this purpose, to follow comets and asteroids ?

Not many days until the comet ZTF is at its closets position, stressed

Lars replied to the topic 'Relative guiding of moving objects, comets etc' in the forum. 4 weeks ago

Tonight I could do some testing of Custom Track rates in Indi EQMOD. Even if I can't get guiding with relative speed when hunting comets it had been good to be able to set Custom Track Rates.

But Indi doesn't accept the DEC Custom Rate and I get these error messages when testing different Custom Rates.

The correction must be bigger than 0.8 arcsec/sec to be accepted. Yes it's a small correction, but when follow the comet for hours it does matter if I can use Custom Tracks.

ps.
Is it correct to ask this question here at Astroberry embedded Indi or should I ask at Indi / Mount ?

Happy new year to all of you !

Lars replied to the topic 'Relative guiding of moving objects, comets etc' in the forum. 1 month ago

These days I shall take photos of a comet with KSTars/INDI.

Not with relative auto guide, only change the speed of the RA/DEC to matsh the comet.

On this page of EQMOD mount driver there is a button for custom Track. 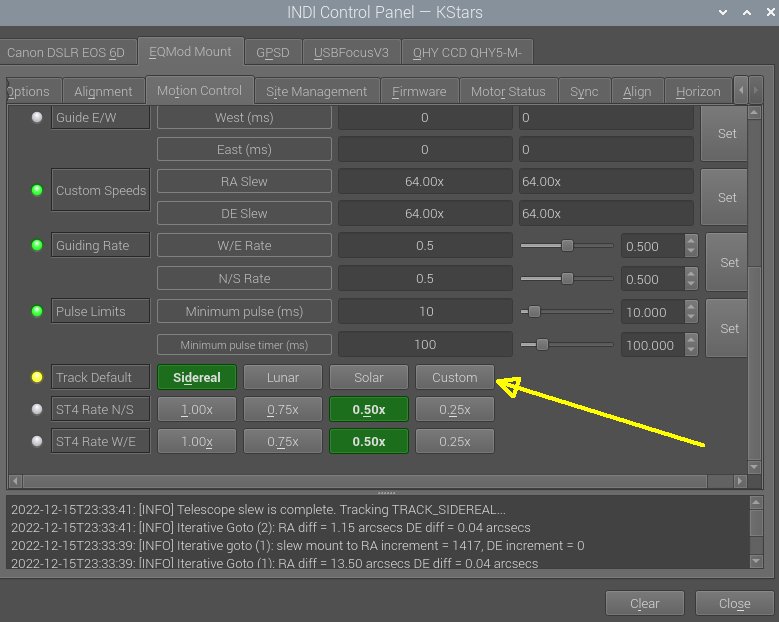 But I can't find anywhere to put in these dRA and dDEC figures. Anyone who knows ?

Lars replied to the topic 'KSTARS can't change language' in the forum. 1 month ago

A couple of days ago I formated my SD card to to do a new instal. I had to start from the beginning agian because I have alltered so much parameters. To my surprize when I did this the labguage of the menus changed back to English, even when I setup the keyboard, time, date to Swedish standard.

Lars replied to the topic 'Eqmod costom gear ratio' in the forum. 2 months ago

Which Indi driver do mean that I can use and setup for a custom gear ratio ?

I know how to do it in Eqmod but then I must change in the source code and compile, not very practical.

Hi,
A couple of years ago I asked if there was a way to set costom gears ratio in eqmod. It was in this thread:

I have not solved that yet. But plan to do it now for my EQ6 mount which operates without the hand terminal.

But before I start this work which I don't fully understand how to do.

Isn't any alternative to eqmod driver I can use instead that can be setup with different gear ratios ?

Or if there is someone that's skill enough to rewrite the eqmod code to have a setup in the menus for costom gears ratio as it is in the Windows version of eqmod ?

Lars replied to the topic 'GPS date and time wrong' in the forum. 2 months ago

Now when I understand a bit better about the problem. It looks that I need to type the command: sudo systemctl restart gpsd often when I start up the Raspberry.

If I want to do it very simple, I want a button on the screen that send this command:

To the command window, how I do that ?

Lars replied to the topic 'GPS date and time wrong' in the forum. 2 months ago

I must have done something wrong last time when the date / clock was wrong. Next time I used it and did the recommended restart of GPSD it worked. I hope it will do it all time now.

Thanks for all help !

Lars replied to the topic 'GPS date and time wrong' in the forum. 3 months ago

I have now been out in the dark and use my equipment. It works better now and the GPS coordinates is transfered to EKOS. But still the time isn't corrected. 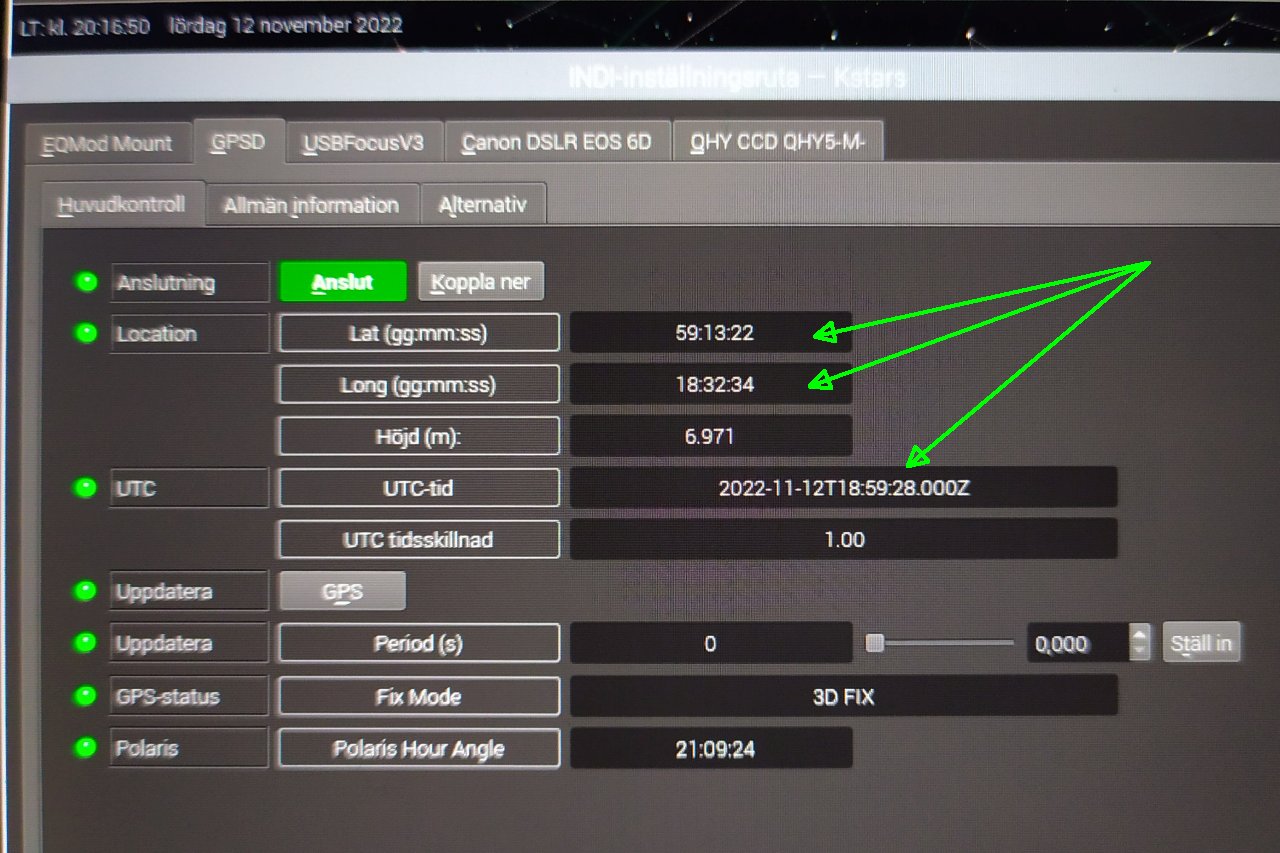 The time and date is correct. It transfer the coordinats to KStars, and the manual update also work.

But in KStars the time is correct in one place but not the other. 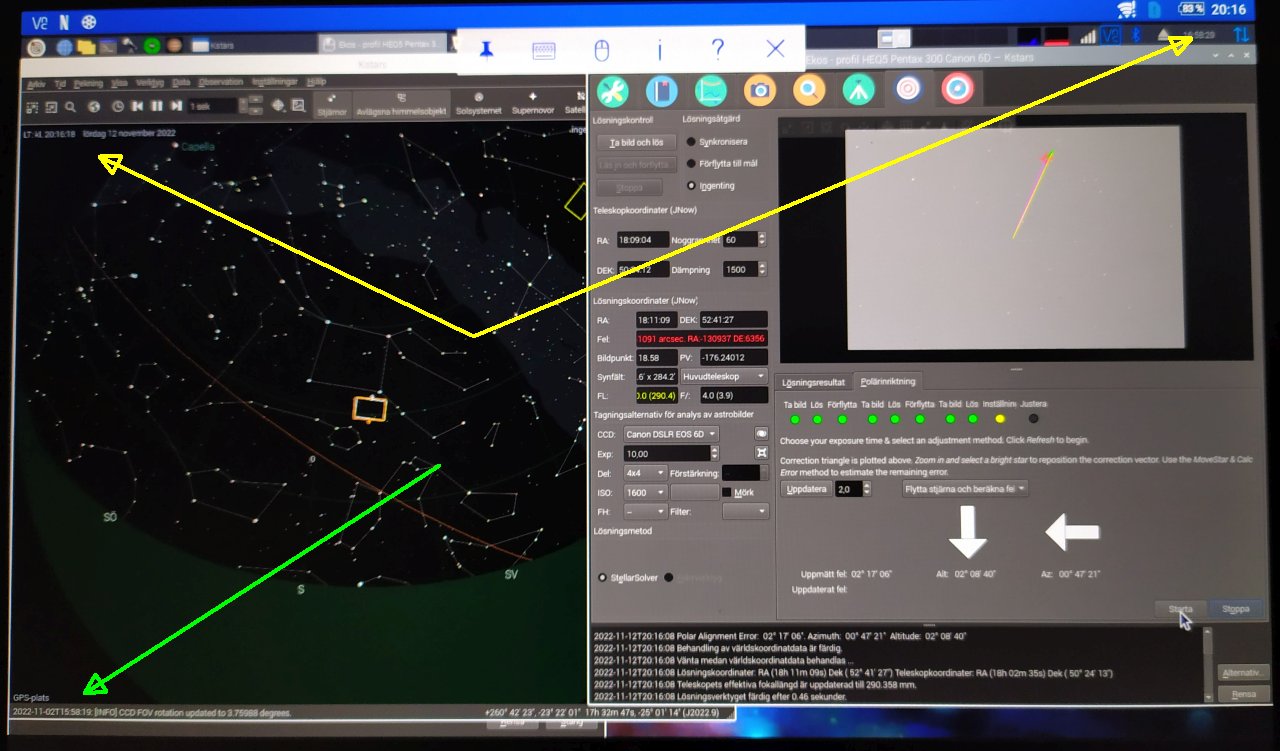 It's the clock at the green arrow that's wrong. It's say that the GPS place is used. Anyway everything looks to work now, only that the timestamps of the photos take the wrong time. I have another problem, when doing a meridian flip the plate solver can no longer find the object, could it too be related to this problem ?

How to fix that also the date and time is transfered to the KStars' time , is there a setup for that ?

Lars replied to the topic 'GPS date and time wrong' in the forum. 3 months ago

Hi,
Interesting with the script, maybe I don't need it for this particular problem if it not occur more often. But script can solve other things. Are there some examples somewhere to read about what it can be useful for ?