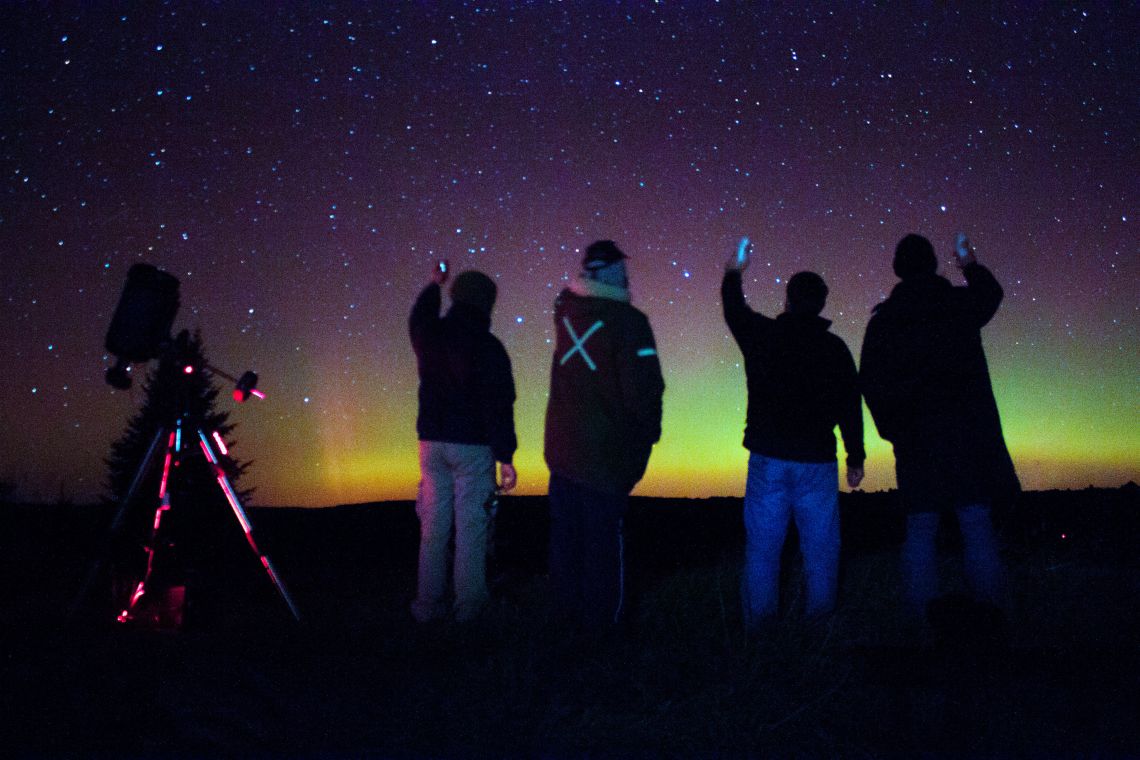 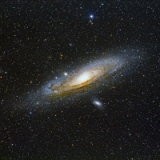 Damian O thanked Andrew in topic KStars star chart, almost no name of DSO and no comets 4 days ago

Andrew replied to the topic 'KStars star chart, almost no name of DSO and no comets' in the forum. 5 days ago

The Catalog settings you are looking for are found in the Configure KStars window. Attached are my own settings.
Changing the magnitude will show more or less. But also the option to show objects of unknown magnitude will show a lot more, albeit generally less interesting, objects. You can also choose which catalogs to display in the Manage Deep Sky Catalogs. Some catalogs such as OpenNGC and NGC IC cover a lot of the same. I chose to one use the slightly larger Open NGC catalog instead of both.
Settings for Comets and Asteroids is also found under Solar System. 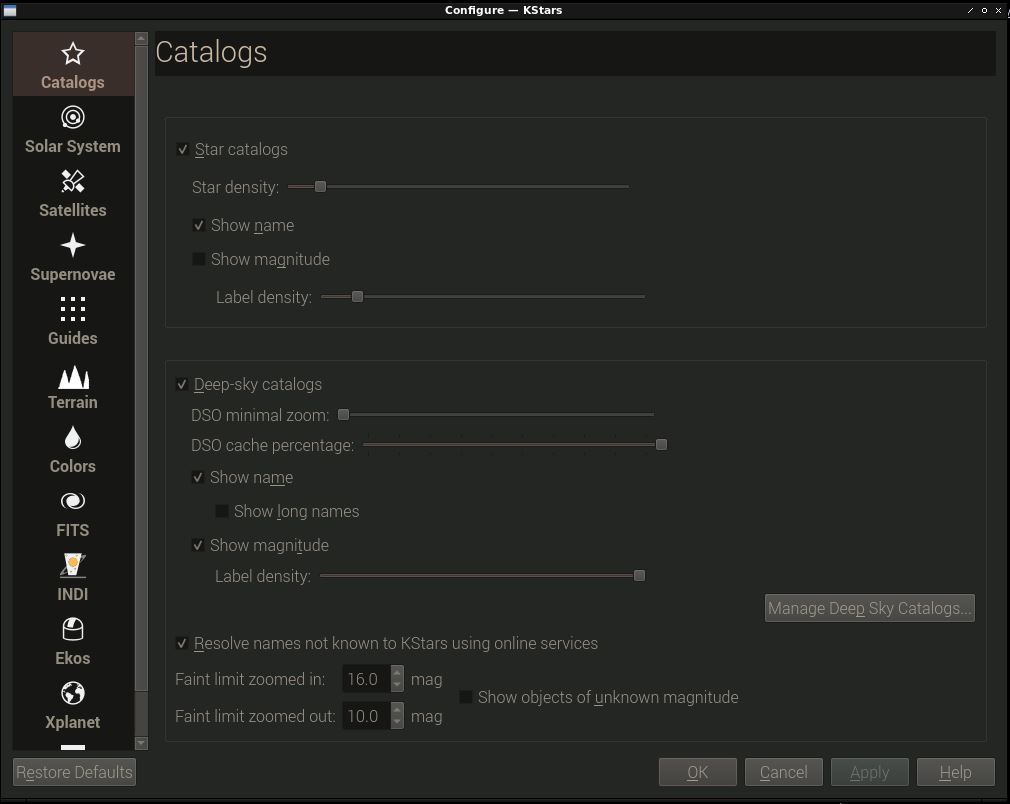 Andrew replied to the topic 'What's Up Tonight Tool: Object Not Found' in the forum. 1 week ago

It appears this was quietly patched. Thank you devs.

Andrew replied to the topic 'Re:Re:Mosaic tool - overlap not correct on width' in the forum. 1 week ago

Hi Eric. First, let me just say that the overhaul of the Mosaic tool is fantastic. Great work!
I had a thought though. Now that the tool allows for easier framing by moving the frame around, why limit it to strictly generating multi-panel mosaics? I think it can also be very useful for fine positioning a single panel. But the mosaic planner will not allow for single panel jobs to be created.
With that in mind, I would propose allowing it to create single panel jobs. And also renaming the Mosaic tool to something like "Framing and Mosaics" then giving the feature a more prominent position in the scheduler as one of the key steps.
This way when a target is searched for within the scheduler, we can be sure it is framed well.
Thank you!

Andrew created a new topic ' Wishlist: Comet/Asteroid shift lock position to PHD2 and internal guider.' in the forum. 1 week ago

I've believe I just worked out how to calculate the change in apparent position of a moving celestial body, such as a comet or asteroid. PHD2 uses this for tracking comets in units of arcsec/hour to slowly shift the lock position.
Dec motion is easy, it's just the difference in Dec position between two time samples.
Ra motion is a bit trickier but I believe it goes by this formula.
(15*dRa)*COS(DECpos*Pi/180)
15 x Difference in Ra x Cosine(Current Dec Position x 3.14159 / 180)

My hope is the ability to calculate this within the guide module and pass it onto PHD2 and internal guider for comet tracking. Similar to the way Cartes Du Ciel can. But we can have a find object popup in the guide module to choose the target we wish to follow.
I've also noticed with calculated rates provided by the Minor Planet Ephemeris Service, that the rates can change significantly in a short period of time on fast moving comets. So I also propose periodically updating the lock position shift rate automatically.
Thank you developers for diligently making KStars more and more capable.

Andrew replied to the topic 'Status of SkyWatcher Star Adventurer support' in the forum. 3 weeks ago

I've never been able to communicate with my first generation star adventurer. Has anybody else had success with it, or is it only compatible with the WiFi version?
Perhaps I am missing something on my setup to use the USB serial interface.

Andrew replied to the topic 'Relative guiding of moving objects, comets etc' in the forum. 3 weeks ago

Great tutorial!
I found your thread regarding your PHD2 issues. I left some troubleshooting advice there.

Andrew replied to the topic 'Internal and phd2 guider problem' in the forum. 3 weeks ago

Andrew replied to the topic 'Relative guiding of moving objects, comets etc' in the forum. 3 weeks ago

I started a topic on this same idea about a year ago. There was some interest, but it did not progress from there.
My recommendation is to stick with PHD2 for comet tracking mode. You can get the dRa and dDec rates calculated from www.minorplanetcenter.net/iau/MPEph/MPEph.html
You will want to choose these options:
Ephemeris interval: Hours (especially for fast moving comets)
Separate R.A. and Decl. sky motions
Display motion as: "/hr
When the HTML tables are generated you will be interested in the values under Sky Motion.
Ensure Sticky lock position of OFF in PHD2. Because eventually the guide star will be lost, and a new one will have to be selected elsewhere.

Andrew replied to the topic 'Ekos Polar Alignment problem' in the forum. 3 weeks ago

I don't quite follow. "Equipment Profile" could mean a few locations in KStars where I can enter telescope information. But as far as I was aware, I only found information entered in the mount tab or directly within the INDI driver itself populated the scope choices available in the align module. Is this something very new?

Andrew replied to the topic 'Ekos Polar Alignment problem' in the forum. 3 weeks ago

I had a bit of an issue one night with the polar alignment tool, and I found it was because the telescope information I entered was not saving or being applied correctly until I filled in a name for the configuration.
This information is entered on the Mount tab of EKOS. Enter the correct telescope focal lengths, Fill in the configuration name, and hit the Save Telescope Info button.
That will fill in the relevant details within the INDI driver itself. You should then save the INDI mount driver configuration from the INDI control window.
So try that. Save telescope configuration with a name and then run the Polar Align Assistant.

Andrew replied to the topic 'Wishlist. GPhoto Burst Mode' in the forum. 4 weeks ago

Thank you. I will have to check that out.

GPhoto is capable of supporting Burst Mode. In which it will capture images to RAM and download simultaneously. Implementing this feature could save valuable time between captures by allowing for an exposure to start while the previous image is downloading from the camera. Although the delay may only be a few seconds for a local download, it can be significantly longer over a network.
I thought one way to implement it would be to set the burst in one of 4 modes:

This should provide a flexible way to plan consecutive subs with minimum downtime. It could also be handy for quick bursts to capture events such as an ISS transit.
I imagine this would require a pretty big overhaul of the capture sequence features to trigger captures properly and keep in sync with the frame count as subs successfully download. But I still think it is worth some consideration. Thank you.

Andrew replied to the topic 'How to off-center a comet in KStars ?' in the forum. 1 month ago

You can always slew to target, then reposition the framing with the mount slew controls or center on a selected point in the image preview.