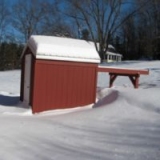 Power on mount
Start KStars & Ekos/INDI using the GUI interface.
INDI panel Park To selection is blank with red LED. Select Park2 and save
Use the INDI Startup: cold start button
This establishes the initial conditions to be Parked with Tracking off. Ekos and INDI panels are in agreement.
INDI select unparked, Ekos also changes. Use Ekos to select parked and INDI also changes.
Select unpark and turn tracking on. Via KStars slew to nearby object. Park scope.
This sequenced worked.

Since the previous driver default unparked conditions was tracking, any suggestions on how to setup for the scheduler?
I have to pre-setup the mount using the cold start button? I did not see a way to have tracking start when changing from parked to unparked, or after slewing to a target. So do I also have to leave the mount unparked and tracking, selecting a target that will still be safe when the scheduled time arrives?

Items to be looked into.
- Why the INDI `Park To' field is lost from time to time.
- Why enabling verbose logging to file appears to prevent the mount indi options save button working if that is still true.
- How to automate the cold start, unpark, track sequence.

The mount initialization is well understood I think. The recent updates have always seemed to hint of confusion between the state between Ekos, INDI and the mount.
Doubt we can get far at this time without some fixes, see the second edit I am about to make to my previous post.
/Tom

Henry,
See if using the cold start button in the indi panel allows you to unpark the mount.

I have not used it this winter so only have superficial impressions noted in my last but one post.

There is some odd behavior in the indi panel using the save button. I had to disable logging in the EKOS setup panel. That removes the logging check boxes from the telescope's INDI panel and then the save button would work.

But the main thing was the introduction of the cold start button in the INDI panel. The user has to locate it in the INDI panel and push it before any of the EKOS mount controls such has park/unpark will work. Not sure how that will play with the scheduler since it does not offer such an option. The initial startup conditions are different now: unparked and not tracking. However one can not slew to a position or do anything else until the cold start button is used. I think that is true even if the mount has not been powered down from one EKOS run to another. I would prefer whatever cold start does, for it to be automated or its requirement be conditional on identifying older mount firmware.

I think some of my initial difficulty with getting it to work was that the cold start button was not there or was not working, can't remember which. This was because was not defined in my mount's INDI XML file due to the file being retained across installs. When I tumbled onto that and edited the file things started to work.

Now I am happy to find the mount can be parked/unparked and slew to a position which appears to be accurate. This is west of Greenwich which I understood to have been an issue previously. This means I can stay with Ekos and will have an imaging session one fine night to try it out more fully.

Are you presently testing via EKOS.

Do you see the cold start button in the telescope's INDI configuration screen panel?

Tom Gibson replied to the topic 'Astro-Physics Experimental driver not working properly in KStars 3.4.2' in the forum. 2 months ago

LinuxUser,
If you still have your setup installed, I am getting signs of life here. Presently running EKos stable with INDI 1.8.8 but hopefully the same for a normal stable install. I running Mach1 with VCP4-P02-08 firmware.

To get the options tab, save and load buttons to work I needed to disable verbose logging in the EKos profile.

Options tab: Load and Save buttons not responding.
To reproduce. In the EKos profile being used, open "Logs" setting. Enable verbose logging
to file, along with some Ekos and INDI options selected.
In telescope INDI window the Debug levels, Logging Levels and Log Output entries will then
appear in the Options tab. At this point the options save button does not work.

Then needed to manually edit ~/.indi/AstroPhysics Experimental_config.xml to add an entry for the
cold start buttons:

Without the edit, manually selecting cold start first thing each time Ekos is started has the same effect.

Can now park/unpark, slew and return to park.

Tom Gibson replied to the topic 'Driver development tutorials' in the forum. 2 months ago

Tim,
There is a rolloff driver example at github.com/wotalota/indi-rolloffino.git
Might provide ideas on error handling and setting up the Ekos interface.
A couple of Arduino examples on sending back status and error information.
Driver is an edit from the Rolloff driver example.
/Tom

Tom Gibson replied to the topic 'Induino Meteostation wind gust' in the forum. 2 months ago

It appears your listed device WH4000 is supported by the weewx product -. www.weewx.com/hardware.html . That would provide viewing of local conditions. There might be the possibility of using the tie in to the Weather Radio driver:
indilib.org/forum/ekos/7287-weather-radio.html?start=156#64275

Tom Gibson replied to the topic 'Persistent Serial Port Mapping' in the forum. 5 months ago

You can confirm it works when defining it manually.

Tom Gibson replied to the topic 'Indi driver crash when focusing' in the forum. 6 months ago

Did you have the take a Dark box checked? I seem to be having trouble with that lately. Works fine without but gets hung up for long periods when checked and finally takes everything down.

Tom Gibson replied to the topic 'Astro-Physics Experimental driver not working properly in KStars 3.4.2' in the forum. 6 months ago

I think I'm back to something for the Mach1 I can use while the driver is being modified.

I did a build from current sources but into different bin directory. Then using github located the 4 lx200ap_experimental files from 1.8.5 replacing those in the local build area. After the build was run again, the indi_lx200generic binary was moved into the distribution's bin location.

The mount now starts up from cold unparked and tracking, Park/unpark and goto now work. Also KStars shows the correct location for the mount in the sky map. Many of the INDI panel's buttons are still dead, though I expect I will be able to edit the XML file to change settings in the meantime.

Now I suppose I should remove the PPA to prevent any updates.

Tom Gibson replied to the topic 'DIY motorised roll-off observatory roof - what INDI driver?' in the forum. 6 months ago

There is one at github.com/wotalota/indi-rolloffino.git.

It is a INDI rolloff roof driver and includes two examples of Arduino programs communicating over USB. The driver is packaged as a third party driver but haa not been included with the standard distribution. The Arduino code needs to be modified to match the motor control selected, the INDI driver should work once installed.

See readme.txt for a brief overview of the communication protocol and INSTALL for build directions. After the build there will be rolloffino as an option under Dome when you edit the EKos profile. The driver works with the Observatory module and weather drivers as you would expect. I am presently using it with the Vantage, WeatherMeta and WeatherProxy for a RG11 rain detector.

For my install I used a Arduino Due with an Aleko gate motor. The 3.3V Due along with pull ups made the wiring more complicated than need be for the relay but I liked the extra USB port while debugging. The attached image shows an attempt at a matching diagram for the Arduino code. The relay & external power supply shown is and approximation just the only image of one I found.

Tom Gibson replied to the topic 'Astro-Physics Experimental driver not working properly in KStars 3.4.2' in the forum. 6 months ago

"Until then I agree with your proposal, that the "Westerners" freeze their stack."

Any suggestions on how to go about doing that after already having accepted an update to the current stable release?