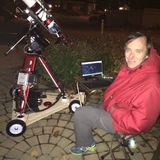 Gilles Gagnon replied to the topic 'Post your INDI Setup!' in the forum. 14 hours 36 minutes ago

Thanks for your comments and suggestions, they are much appreciated.

As far as the 'boxes' and control in the observatory, I have a box with power distribution (Powerpole), a Raspi 3 B+ running the observatory (roof relays and limit switches, "Weather Radio" weather station and, once ready, a lightbox for flats). Power is controlled by a Digital Loggers web switch. A PoE network switch provides wired connectivity and monitoring camera connection.

Because of an early mishap, and on my wife's suggestion, I have installed a manual roof control for when I need to work on the obsy as well as a panic button, just in case

Unless the roof opening system totally fails, I have a battery backup mechanism that feeds the linear actuators in the eventuality of a power failure, controlled by a small wireless remote. I haven't devised a way to get inside yet in case of total failure but I can have access to the linear actuators holding brackets with minimal 'damage' to the roof. I have a nicer solution in mind but I haven't found the hardware for that yet.

I haven't implemented the ventilation yet as I am not sure on how I want to do it. I have thought of something like the following with a fan controlled by an Arduino monitoring temperature and humidity but I'm still juggling with the idea. I also have to consider snow possibly blocking air inlet, in the equation. 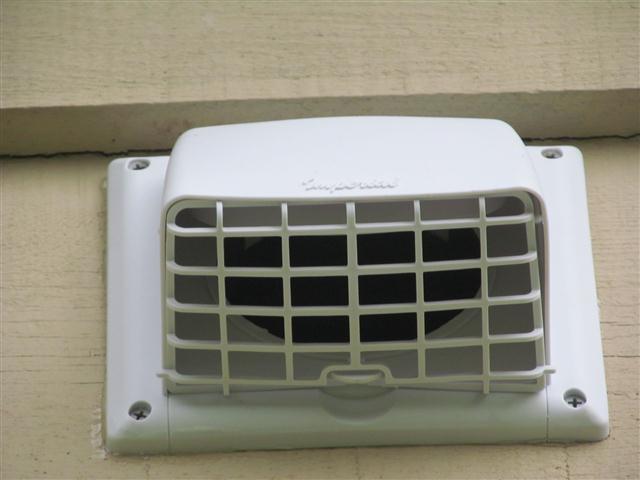 Thanks for the tip on the limit switches. I will look into better ones but an alternate solution I thought of is adding redundancy through magnetic sensors such as door open/close sensors, connected in parallel with the switches. The switches are used to confirm full closure or full opening states, not as actuator limits per say.

As far as the extra plank is concerned, there may not be enough space to install one as the gap between roof and wall is rather small I could probably use the same rubber membrane I uses to protect the hinges side of the roof. Not as elegant but this is not a beauty contest.

As far as my equipment, it consists of a William Optics GTF81 scope, mounted on an OnStep modified Astro-Physics AP400 mount, all controlled with an ODroid N2 computer and Pegasus Astro UPB. Cameras are ZWO.

Let me know if you want more details.

Gilles Gagnon replied to the topic 'Post your INDI Setup!' in the forum. 17 hours 57 minutes ago

Some photos of my remotely controlled observatory, now operational (from our living room). The box is roughly 48 inches (1.2 meters) on a side and 60 inches (1.5 meters) high. As I do not have clear access to the north (very tall white pine trees), the hinged roof, that opens with linear actuators, does not need to open fully but I am considering modifying it so it open more like a roll-off roof.

Everything operates under a distributed KStars/Ekos/INDI system on ODroid computers running Ubuntu Mate.

Once the proverbial rainy days go away, I will be able to refine the orientation on the obsy and perform polar alignment and a few tests. Once I am satisfied with the operation and tests, I will likely move it to another area of our lot.

Thanks to the contributors for the KStars/Ekos/INDI environment and to Gonzothegreat for the initial design ideas! 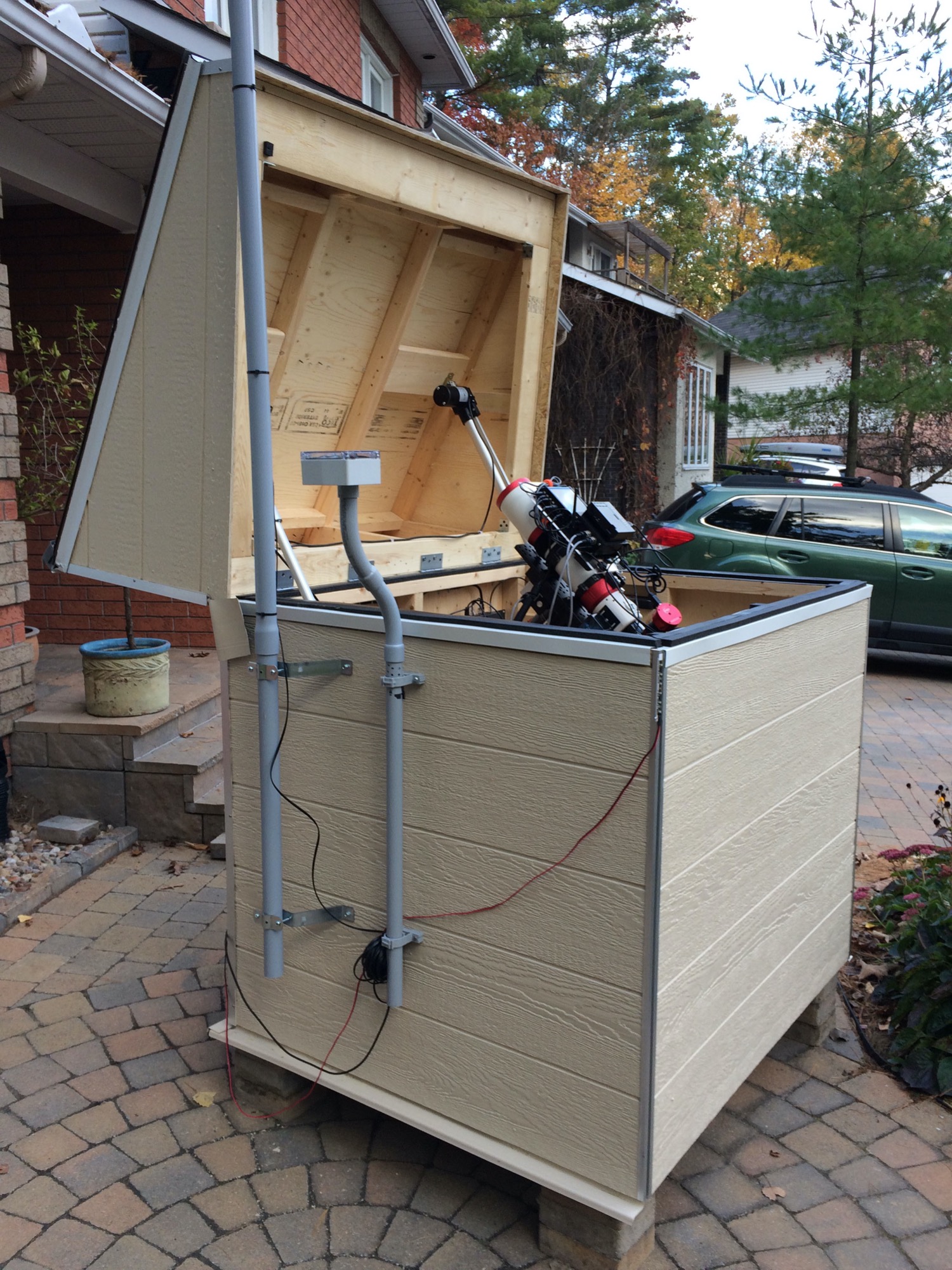 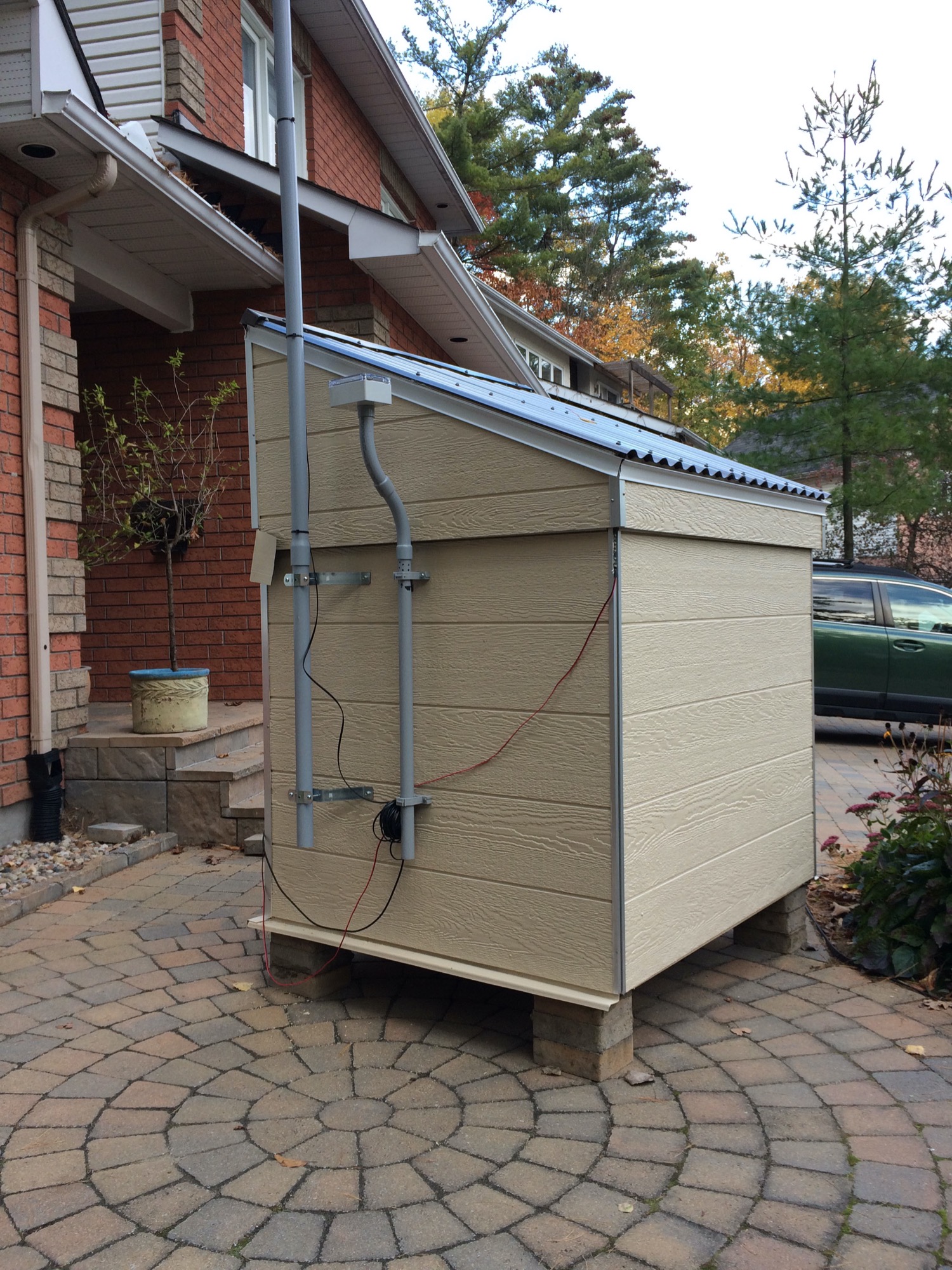 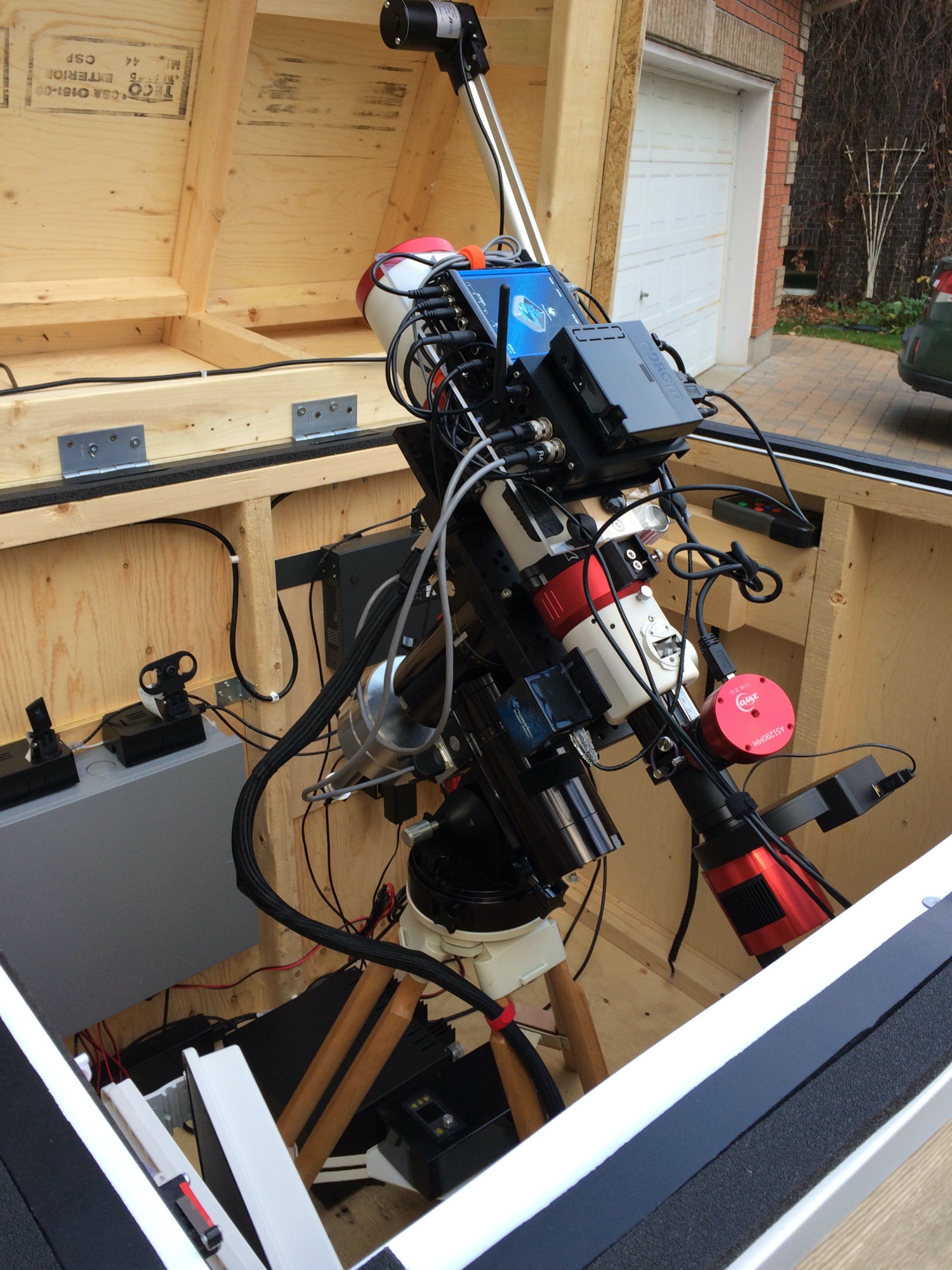 Gilles Gagnon replied to the topic 'KStars disappears / crashed?' in the forum. 1 month ago

IIRC from using the Ekos Debugger a few weeks ago, there is a button on the top right of the debugger window that allows you to specify where you want to save the log file that the debugger creates.

Gilles Gagnon replied to the topic 'Using Nightly driver with stable INDI release' in the forum. 1 month ago

Thanks for your answer.

I guess my options are: 1) wait for the next stable release (don't know how soon), or 2) take the plunge into Nightly and maybe contribute to finding and solving issues, if any, with the drivers I am using, but hoping there are none.

Just wondering if there are problems using a nightly built driver with the latest stable release.

More specifically, I am thinking of using the latest Sesto Senso 2 focuser driver with my stable release as it now has support for the Esatto focuser, which I would like to give a try.

I know I could use the Nightly PPA and not have compatibility issues but, even though it is probably unlikely, I do not want to bring other issues on board for the moment.

Thanks for any enlightment.

I had thought about the PoleMaster as, once polar alignment is done, the camera doesn't have a much useful purpose. Using any camera that has been replaced by a newer one is also a good idea for cloud (or visual obstacle) detection, as long as it's parallel to the optical axis of the scope and it has an appropriate FOV for the purpose. The simplest way do evaluate a change of condition would be to process subsequent images and check for differences at the edges of the frame, I assume. More involved processing techniques could probably get a better estimation of the sky conditions.

If by "a camera that always looks at the same place" you mean a camera that point in the same direction as the telescope, yes that would be easier and likely more precise but you will likely require a camera FOV that would make detecting incoming clouds possible, before they get in the FOV of the capture camera It should also be independant from the capture camera so it could monitor cloud movements while a capture is going on. That could be an interesting application for a PoleMaster that would be mounted on the optical axis of the scope.

Anyway, that's all food for thought.

I think the all-sky camera is not necessarily IR, a standard camera should be sufficient.

From what I get from the paper, a simple 1/0 detection/counting of stars (detected or not) will not take into account the possibility of light clouds through which some starlight could pass attenuated and be detected, leading to think that there are no clouds, thus giving a wrong estimation of the cloud cover. It may be interesting to evaluate the usefulness of coupling an all-sky camera star counting algorithm to a small FOV MLX90614 sensor to measure the "telescope pointed" sky temperature. You may still need to account for atmospheric effects and other factors but that's making for a more interesting/challenging project.

Joaquin thanked Gilles Gagnon in topic How to create a cloud sensor for a part of the sky? 1 month ago

I just found this interesting paper that could be relevant to what you want to do. It uses an all-sky camera (180 degree FOV) to estimate and map cloud cover for the observation of Cherenkov photons.


Abstract. Atmospheric monitoring is a field of special importance for astroparticle physics, especially for Imaging Atmospheric Cherenkov Telescopes (IACTs) as clouds will absorb and scatter the Cherenkov photons of air showers. Conventional tools used for atmospheric monitoring (e.g. LIDAR) are very expensive and monitor only a small part of the sky at once. Therefore, they are not suitable to perform a wide scan of the sky which is necessary to detect clouds in advance.
This article gives a short overview about a method that uses an all sky camera with a 180 ◦ field of view to identify the cloud distribution by measuring the absorption of star light. It can be used to assign a sky quality rating to single spots, arbitrary regions or the whole sky at once within a 1 min exposure time. A cloud map can be created from the available data that can be used to determine shape and dimension of clouds and to predict their movement. The resulting data can be used by a scheduling algorithm or the operating crew to point the telescope to a different source before the current source gets covered by clouds. The all sky cameras used so far are located on La Palma at the observatory Roque de los Muchachos close to the telescopes FACT and MAGIC and the planned northern CTA site.

I am not sure you can get the narrow FOV parts with evaluation boards like the Adafruit or DFRobot ones but they are available as discrete parts that you could use if you have soldering skills. Unless they are surface mounted on the evaluation boards, I am quite certain that one could replace the standard part with the narrow FOV one fairly easily.

If you are interested/curious, you can look at the Melexis datasheet for the MLX90614, www.melexis.com/en/documents/documentati...s/datasheet-mlx90614 .

You can get the MLX90614 (cloud sensor part of the Weather Radio) in narrow field of view version. The standard part has a 90 degrees FOV but the MLX90614 is also available in 10 or even 5 degrees FOV.

What I am coming at is that a specialized/limited version of the Weather Radio could be built with a narrow FOV MLX90614 that would be put on the same axis and in from of the telescope tube. That could give you a good idea of the cloud cover in the FOV of the telescope, and the standard Weather Radio would give you an idea of the general cloud cover.

Ideally though, an all-sky (thermal?) camera with cloud detection/mapping over the KStars window would be preferred but... that's another story.

Gilles Gagnon replied to the topic 'Focuser for a Celestron C8' in the forum. 2 months ago

You can add the PrimaluceLab Esatto focuser to the list but there is no dedicated driver yet, it works with the Sesto Senso 2 INDI driver but with likely limited capabilities. I got mine very recently and installed it on my C8. It's a very nice and very solid piece of work; I can't wait to put it to work, under a cloudless sky.

You can also look at the Pegasus Astro DMFC (or whatever replaces it) as it can be purchased with an SCT adapter. I use a DMFC with my small refractor and it works very nicely. This option is cheaper than the Esatto but as it connects to the C8 focus knob, you are likely to encounter mirror shift issues.

The Esatto connects to the C8 rear flange and is a Crayford type focuser. You can pre-focus with the C8 focus knob, lock the mirror if your C8 supports it, and then use the Esatto to perform fine focus adjustments.