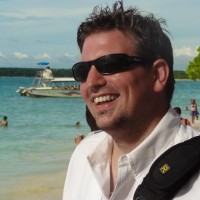 Remco Hekker replied to the topic 'Pegasus PPB - how to control power to Stellarmate box, using KStar/Ekos' in the forum. 10 months ago

It kinda depends on the type of powerbox you want to buy and how you are planning on powering the Pi.

I own a PocketPowerBoxAdvanced, If you power your Pi with a 12v to 5v. cable, you can turn on and off the power to those outputs from the INDI driver panel.
The PPBA can turn off the 4 main 12v outputs all for with one button not individually. And the adjustable 3v-12v output has a separate switch. (see screenshot.)
I understand that the Ultimate Powerbox can cycle each output individually, although I'm not sure so please double-check.

If you plan on powering your Pi over the dedicated USB output (I just found out that it doesn't supply enough power in my situation)
there is no way to cycle the power. The USB cycling feature is not supported in INDI I think it has to do with how Linux addresses USB ports.

Remco Hekker replied to the topic '[SOLVED] SM 1.5.9. USB Devices not connecting.' in the forum. 10 months ago

Quick update on this issue:

Jasem logged in to my Pi this afternoon and was able to quickly diagnose that my Pi was underpowered sad.png
I was a little disappointed since I was using the dedicated Raspberry Pi power output on the Pegasus Astro Pocket Powerbox Advanced.
But using both a dedicated Pi power supply and the 12v to 5v. cable (included in the official SM package) the problems disappeared.

Remco Hekker replied to the topic 'SM 1.5.9. USB Devices not connecting.' in the forum. 10 months ago

Thanks all.
I'll do what Jasem suggested and open a ticket.

For completeness.
I focussed on the EQmod driver to keep the number of variables down. It is connected directly to the SM.
All the other devices including the cameras are running through the PA powerbox hub which would be one more level of complexity.

Remco Hekker created a new topic ' SM 1.5.9. USB Devices not connecting.' in the forum. 10 months ago

Yesterday I was preparing my set to do some imaging after a long period of cloudy nights.
No matter how much I tried, I couldn't connect to most of my USB Devices. (EQmod, Pegasus PPBA, Pegasus DMFC)
Both my cameras (zwo) were inconsistent.

I decided to focus my troubleshooting on the EQmod driver since it is directly connected to my Pi4B (4GB) and I don't have to worry about USB hubs.
I've tried adding serial port mapping, removing serial port mapping, and connecting to every USB port in INDI. Then I tried the same on different physical USB ports.
I abandoned the night figuring it might be a hardware problem. Today, I resumed troubleshooting. Now I've tried all the same using my backup Pi3B.
Again, no luck.

Lastly, I tried my backup sd card where I kept a version of stellarmate 1.5.7.
Everything worked perfectly without so much as a warning.
It occurred to me that I was running 1.5.9 on the SD cards that I had only used it with simulators thus far.
I had completely skipped SM 1.5.8.

What can I do to troubleshoot this further? I'm fine running 1.5.7 for now, but would like to solve this anyway.
Any help will be greatly appriciated.

Remco Hekker replied to the topic 'New Feature: Terrain backgrounds' in the forum. 11 months ago

So I knew the virtual terrain feature was going to be incredibly useful with my horizon. But I never expected it to be so much fun.
As someone who is pretty new to astronomy, this feature really helps fill in the gaps between looking at sky charts and looking up.
Thank you! 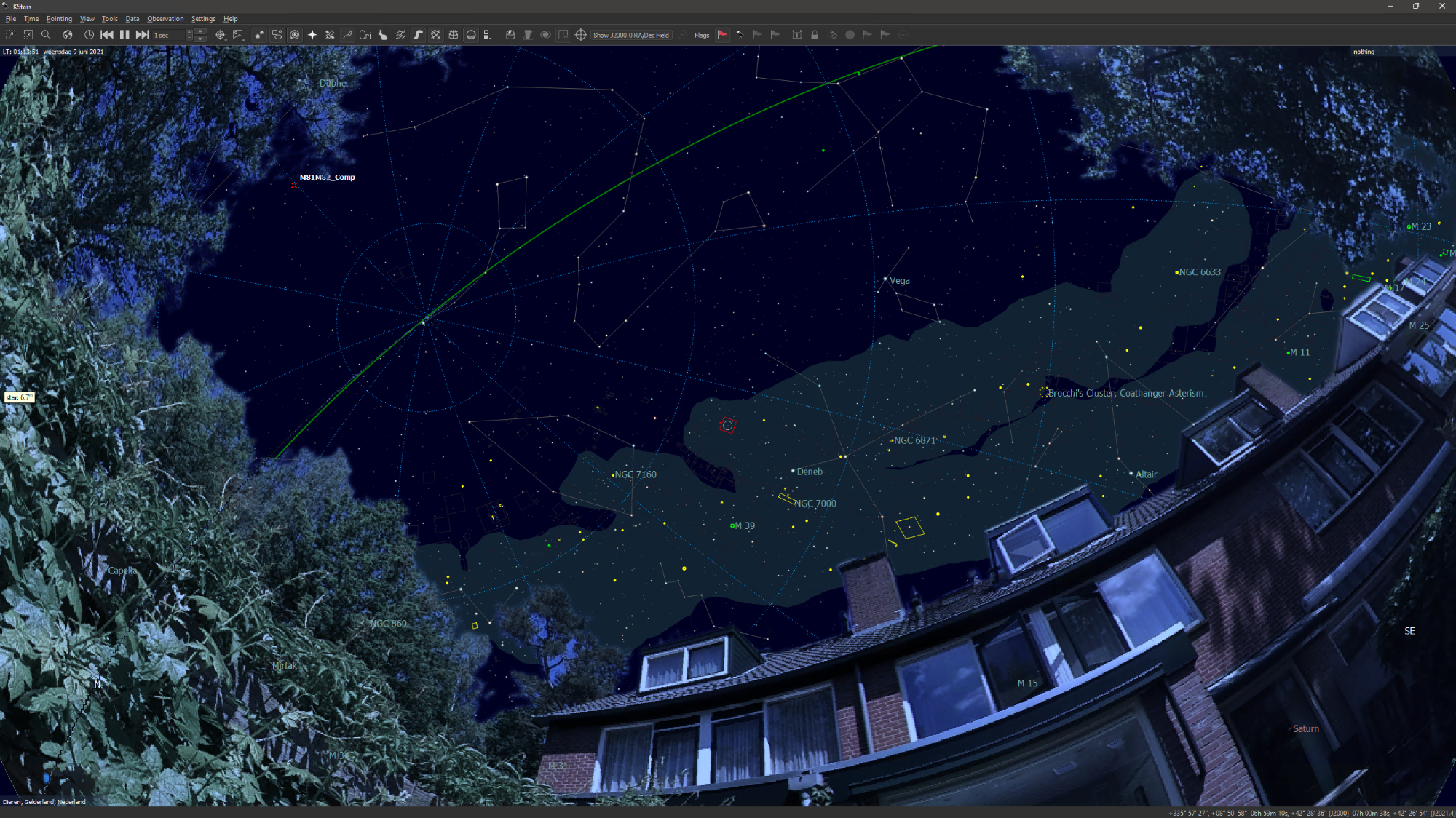 Remco Hekker replied to the topic 'Re:The Gang on the AstroImaging Channel' in the forum. 11 months ago

Absolutely, great presentation guys! I love how much energy and positivity you guys projected.

Remco Hekker replied to the topic 'Re:Serial read error after meridian flip' in the forum. 1 year ago

Yeah thats exactly what caused it with me. I spend a litlle time and a bit of money on new cables. And the problems disappeared.

I've been trying out the new version of K-Stars before I'll use it in my live environment. Now that I'm testing the new PAA,
things start going wrong. Adjusting the virtual altitude-screws works like expected, but the virtual azimuth-screws produce unexpected results.

Now, of course this could be user error, but it looks like a bug to me.
I happened to record my session with a screenrecorder.
I'd be happe to provide more info if usefull.

Remco Hekker replied to the topic 'Forced flip Goto like EQMOD' in the forum. 1 year ago

Wow! Thank you. I'll try that tonight could save me a lot of time.

Remco Hekker created a new topic ' Watchfolder functionality for FITS Viewer in EKOS' in the forum. 1 year ago

Recently, I've optimized the download of my images by connecting a NAS drive to my stellarmate and have the EKOS Windows client save my images on the remote device.
There I enter the path to the correct folder on my NAS.
Before I would save the images locally and point to the same folder on my NAS.

I have found that download times are a lot faster this way. And since there is no downloading on the Windows client, the speed of the client's network connection is not a bottleneck in the imaging sequence.
Unfortunately, this way I do not get to see any of the images I take except for previews.

Would it be possible to manually point the FITS viewer to the folder where my images will populate? So that it can automatically show me the newest image.

Craig thanked Remco Hekker in topic What can I do to the most stable experience? 1 year ago

Remco Hekker replied to the topic 'What can I do to the most stable experience?' in the forum. 1 year ago

Thanks Jasem, I will definitely do that.

I know you guys are putting in a lot of effort to make all the clients run smoothly. But I your opinion, would I gain a lot of stability by switching to Linux?

Remco Hekker created a new topic ' What can I do to the most stable experience?' in the forum. 1 year ago

I'm happy to report that I had a fantastic night of imaging last week. I had just a couple of cloud-free hours, and since then the weather has again been terrible.

Sadly, even on a night where the Astro-gods were smiling at me. I still experienced a couple of nasty problems with K-stars/EKOS. This time K-stars crashed (both times) when I activated the scheduler. I found EKOS "focussing" while it didn't actually initiate the focuser a couple of times. And the meridian flip did not complete without manual interference. I consider myself an intermediate-beginner with regards to astrophotography and I was pretty happy that none of these issues ruined my night, but that I knew how to circumvent all of them.

In the bigger scheme of things, I have been experiencing a lot of issues since I bought some new equipment this summer. Problems with my network, with plate solving, with guiding, conflicting serial ports, software bugs and some pretty stupid user errors. I've consistently worked through them, and I'm still here

Now I believe the biggest cause of these problems, without a doubt, is me. And I'm embracing the opportunities to learn and grow. However, I think it will be a lot easier to find what I've been doing wrong when K-stars runs smoothly, and I can't hide behind these crashes for an excuse.

Therefore my question is: What can I do to get the most stable experience with K-stars and EKOS.

Currently, my setup is as follows:


Some considerations:
Until a couple of weeks ago, the PI4 booted from SSD. Loved the speed, but the MicroSD died and have been running from a new SD ever since. I think it is easier to have a backup SD in this configuration.
Before the summer, I stayed with one version for stellarmate and k-stars that was very stable for my setup. I had to update for the support of some of my new equipment. I also love those new features that have been released. In the future, I hope to keep a stable version that supports all my kitt and test out newer versions before I update.
I'm installing a Wifi access point in the yard 10ft from my setup. The physical ethernet connection is difficult to maintain and can only sustain one device. Strong wifi would make it possible to take a laptop or tablet into the backyard for polar alignment etc.

I think installing a dedicated Astro-imaging laptop might be a good idea, especially once I have internet in the yard. I would be repurposing a laptop for that. i7-3537 2Ghz, 8GB Ram, 2GB VRAM hope that is enough. The alternative would be running K-stars on the same machine I'm doing now. Specs are better, but it would share the device with dozens of other applications. Also, I would really like to stay on Windows, but if you believe it makes a big difference, I'm willing to switch to Unbuntu.

I know it's a big question, but I hope someone is willing to help me.
It will be greatly appreciated.

Remco Hekker replied to the topic 'PI4 only showing one ZWO camera at a time.' in the forum. 2 years ago

Unfortunately, I don't think it has to do with the USB hub.
I'm powering my entire setup with the Pegasus Astro pocket powerbox advance. (Using the pegasus astro 10A power supply)
The only USB hubs that I use are the one build in to the PPBA and the one in the ASI533.
I did test the hub in the ASI switching the guidecam to the ppba hub or connecting it directly still let to either one or the other camera showing up never both. Also I'm powering the PI4 with the dedicated USB port that Pegasus Astro claims is able to power the PI4.

Next time I setup I will test if powering my PI4 with the 12v. To 5v. Stellarmate cable makes a difference. Just to be sure.

It's good that you've asked but I do indeed define ZWO for both cameras.
The same way it works in my current PI3 setup.