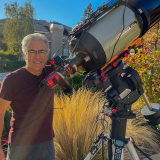 Rob - my initial results are positive - everything seems to work as expected. It's daylight where I am so I won't say it was a full test but, no more crashes when starting the profile. The imaging trains appear as normal and my filter wheel filter selections also appear as expected (under 3.6.1 they sometimes weren't accessible). I'm able to move the mount and shoot frames as well.

Thank you and the team for your work on this - look forward to using it under dark skies!

To answer an earlier question, I am running KStars on a Mac desktop and connecting to a StellarMate OS remote Indi Server running on a RPi. I had the worry that the RPi wasn't current and did a software update to the latest release of the StellarMate OS. I got the same result - crash when starting the profile. It crashes immediately so I don't get as far as looking at optical trains.

Hi Rob - I wanted to make sure you were aware that the KStars download site (edu.kde.org/kstars/) has the 3.6.2 version as the current release. I did try it and it still crashes when starting a profile. Perhaps consideration should be given for having the 3.6.1 release for Mac users posted on that site until 3.6.2 is able to run reliably.

Rob - unfortunately I am getting the same result. I've attached log files for your review. Regrettably I don't have the technical chops to interpret the information.

I removed the Manual Filter from the configuration and tried multiple relaunches, including after a system restart. Still the same result. I've attached log files for you from the runs without the filter. It's strange because this configuration runs fine under 3.6.1.

Tried the Beta 2 file and got the same results as before. The moment I start the Ekos profile there's a brief flash of the Indi Control Panel and then EKOS and KStars simply crashes/quits. I've attached four log files (apparently two are created each time I launched KStars and then tried to start EKOS).

Let me know if I can share any other information.

My crashes occurred immediately after I selected the 'Run' button in Ekos. The system would not even get as far as displaying the Indi Control Panel. Having read Peters post as well, I wanted to say, in my case, rebooting the Mac didn't result in a change. I've attached three log files from this morning (I had to re-install 3.6.2 first). Again, happy to provide more information.

Just downloaded from your link to give it a try. I'm running KStars on a Mac talking with an RPi (running SterllarMate OS) at my mount. The Beta crashed 7 or 8 times every time I tried to run the profile for my setup. I reloaded 3.6.1 and everything works again - made no other changes. I have no idea.

I'm running Mac OS 13.0.1 on an M1 Mac Studio. Happy to provide any information you'd like.

Frederick Ruegsegger replied to the topic 'Multiple Zwo Cameras' in the forum. 2 weeks ago

I've been using a ZWO main camera and a ZWO guide camera and it has been working well. I just use the ZWO CCD device selection in the Profile for both the CCD and the Guider. I have noticed when I occasionally have to look back at the profile that the Guider selection is blank but it hasn't had an impact on my imaging or guiding. I tried using the ZWO Camera 1, Camera 2, etc. devices but that turned out not to work well for me - in fairness I haven't even tried to use those in many months.

Frederick Ruegsegger replied to the topic 'Feedback from a user leaving Stellarmate' in the forum. 4 weeks ago

I appreciate your frustration. A couple of things I've done to alleviate some of the challenges:

1) After trying to use WiFi to control the RPi, including adding external antennas, I finally just used a long ethernet cable to connect the RPi to my network. I think that is what Alessandro meant - not a cable from the RPi to the device with the app. I'm sure the bad RPi WiFi support is why ZWO's ASIAIR now has external antennas. My experience using WiFi was the same as your - almost unusable. Ethernet has been solid.

2) While I don't do EAA, I think Alessandro is correct (I'm sure other's will chime in) that, when you use Stellarmate from a mobile device, the computations and such take place on the RPi and are displayed to the app - can be very slow. I know that when I went to a full frame camera, I also had to change the RPi to an 8GB model - the 4GB was unusable. What I have switched to is just running the Indi Server on the RPi (that comes with the StellarmateOS) and running KStars/EKOS on a laptop or desktop computer - that way most of the work occurs on a more capable device.

I think the UI on Stellarmate is evolving in good ways but the mobile device control of the RPi is hampered by the lack of power in the RPi units and their bad WiFi.

Best of luck to you!

Frederick Ruegsegger replied to the topic 'What is considered good guiding?' in the forum. 1 month ago

I have a CEM120EC2 as well - for about 8 months now. I see that we are shooting with the same OTA at the same focal length. Do you mind sharing your settings in the options tab? While I'm at a lowly 500 feet above sea level, my guiding very consistently issues pulses to the mount and while my guiding can be <.5" it is often greater than that and approaches 1". While my stars are still round, there are frames where the bloat is visible when blinking a nights images. As a result I'm constantly fiddling with the options settings trying to improve performance. One thing I notice is that you have your guide camera set up for 1x1 binning. I've gone back and forth and am currently at 2x2 and getting ok results.

Thanks for any thoughts you care to share - Fred