In this page we describe how to write a very simple Driver using the INDI for Java libraries. It is assumed that you have some knowledge about the INDI Library and some Java programming experience. If you find any errors or think that any point should be clarified, please do not hesitate to contact me at zerjio AT zerjio.com.

In order to use the INDI for Java Driver library you have to download it, unzip it and locate the following two .jar files: JavaINDIDriver.jar and JavaINDI.jar. Both files can be found in the dist directory. You will need to include both files in your classpath. If you are using a IDE (like NetBeans), you will have to include them as needed libraries for your project. Please refer to your IDE documentation on how to do this if you are unfamiliar with using 3rd party libraries.

We are going to develop a very simple INDI Driver called INDIDriverExample. It will have just three different properties:

Every INDI Driver developed with the INDI for Java Driver is a class that extends the laazotea.indi.driver.INDIDriver class:

Also note that the class implements INDIConnectionHandler. This will allow to easily define and use the standard CONNECTION Property. In fact, once the Driver is set to implement the methods in INDIConnectionHandler it automatically adds the Property and its elements, requiring no additional programming (apart from the specific connection and disconnetion code that we will show in the following).

As the INDIDriver class is abstract, we have to implement several methods. One of the most important ones is the getName() method:

In the class constructor we will usually initialize the Properties and Elements that will be available in our driver:

Note that the INDIDriver constructor needs an InputStream and OutputStream from where the messages will be sent and received. Those streams will usually be the standard input and output, but it is not the drivers task to control that. That is why we use

as the first action in the constructor.

The next lines just create the rest of Properties and Elements. Please note that when creating an Element you specify its owner Property. Thus, it is not necessary to explicitly add the Elements to the Property.

Now is time to add the created Properties to the Driver. We will do this when the Client ask the device to be connected (via the CONNECTION Property). As we previously mentioned our driver implements INDIConnectionHandler which is composed of the following methods:

Note that when the Client asks for the disconnection of the Driver the properties will be removed.

Dealing with Changes in the Properties

We are almost finishing our example. In fact, the only thing to do is to parse the Client requests to change the Property values. To do so we must implement the following 4 methods (one for each kind of Property except from Light ones that cannot be changed at the client side):

The first three methods are empty as there are no properties of that kind that can be changed by the Client. In fact, only the SEND property can be changed. As it is a Switch property, we deal with its changes in the processNewSwitchValue(...) method.

If you study the code you'll notice that much of it is just ensuring that the selected property and elements are the desired ones. This is of major importance when the Driver has a greater amount of properties.

The function loadImageFromFile() just loads a image (the one to be sent) from the hard disk into the BLOB Property:

Finally, note that the code

Running and Testing the Driver

Now the code of our simple Driver is complete... so it is time to test it!

To do so we will need two follow two steps. The first one is to run the driver and the second one is to use some INDI Client to use it:

We will make use of the indiserver application (provided by the standard INDI Library). Please note that once the INDI for Java Server Library is completed this step will be certainly changed.

At this point we face a little problem: the indiserver application does not allow to launch programs with parameters. We will solve this problem by creating a small bash script called launch.sh. That bash script will consist only in the launch command for the application. In our case, its contents are:

At this point we can launch the program with the following command:

If everything is right you'll see a message similar to:

Using a INDI Client to Test It

Open your favourite INDI Client (for example KStars), connect to your same machine in the standard INDI port (7624) and try to use it!. I'm sorry but the following images are in Spanish, but I think they can be clearly understood. 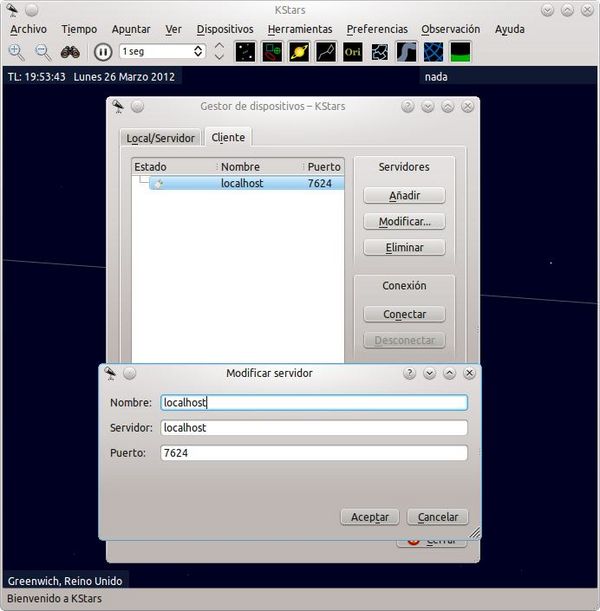 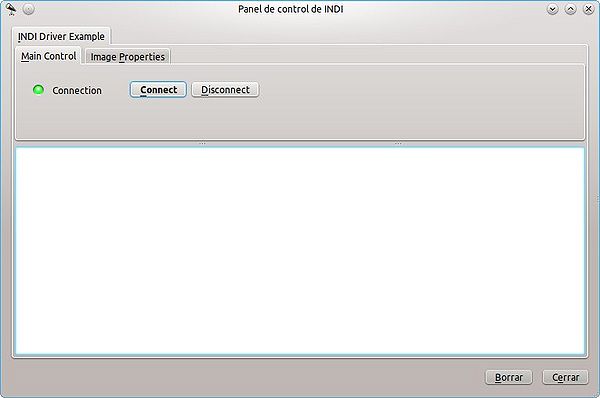 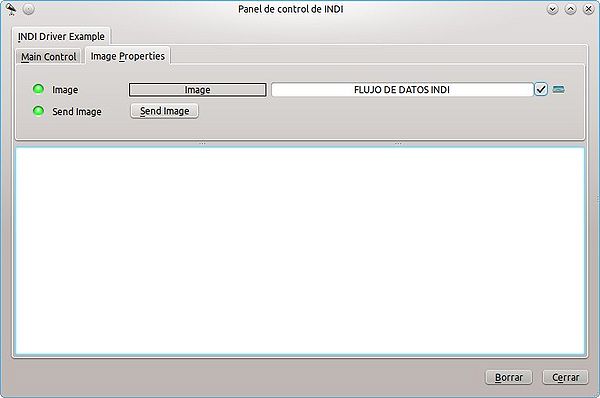 You can download all the files of the example.