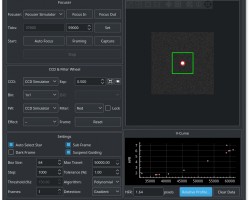 In order to focus an image, Ekos needs to establish a numerical method for gauging how good your focus is. It's easy when you look at an image and can see it as unfocused, as the human is very good at detecting that, but how can Ekos possibly know that?

There are multiple methods. One is to calculate the Full Width at Half Maximum (FHWM) of a star profile within an image, and then adjust the focus until an optimal (narrower) FWHM is reached. The problem with FWHM is that it assumes the initial focus position to be close to the critical focus. Additionally, FWHM does not perform very well under low intensity fluxes. An Alternative method is Half-Flux-Radius (HFR), which is a measure of the width in pixels counting from the center of the stars until the accumulated intensity is half of the total flux of the star. HFR proved to be much more stable in conditions where you might have unfavorable sky conditions, when the brightness profile of the stars is low, and when the starting position of the focus is far from the optimal focus.

After Ekos processes an image, it selects the brightest star and start measuring its HFR. It can automatically select the star, or you can select the star manually. It is usually recommended to select stars that are not too bright as they might get saturated during the focusing process. A magnitude 3 or 4 star is often sufficient.

Ekos then begins the focusing process by commanding the focuser to focus inwards or outwards, and re-measures the HFR. This establishes a V-shaped curve in which the sweet spot of optimal focus is at the center of the V curve, and the slope of which depends on the properties of the telescope and camera in use. In Ekos, a full V-curve is never constructed as the focusing process works iteratively, so under most circumstances, a half V-curve shape as illustrated in the Focus Module image is measured.

Because the HFR varies linearly with focus distance, it is possible to calculate the optimal focus point. In practice, Ekos operates iteratively by moving in discreet steps, decided initially by the user-configurable step size and later by the slope of the V-curve, to get closer to the optimal focus position where it then changes gears and performs smaller, finer moves to reach the optimal focus. In the default Iterative algorithm, the focus process stops when the measured HFR is within the configurable tolerance of the minimum recorded HFR in the process. In other words, whenever the process starts searching for a solution within a narrow limited range, it checks if the current HFR is within % difference compared to the minimum HFR recorded, and if this condition is met then the autofocus process is considered successful. The default value is set to 1% and is sufficient for most situations. The Step options specify the number of initial ticks the focuser has to move. If the image is severely out of focus, we set the step size high (i.e. > 250). On the other hand, if the focus is close to optimal focus, we set the step size to a more reasonable range (< 50). It takes trial and error to find the best starting tick, but Ekos only uses that for the first focus motion, as all subsequent motions depend on the V-Curve slope calculations.

When using the Polynomial algorithm, the process starts in the Iterative mode, but once we cross to the other side of the V-curve (i.e. once HFR values starts increasing again after decreasing for a while), the Ekos performs polynomial fitting to find a solution that predicts the minimum possible HFR position. If a valid solution is found, the autofocus process is considered successful.

While Ekos Focus Module support relative focusers, it is highly recommended to use absolute focusers. 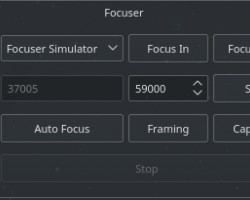 Any INDI-compatible focuser is supported. It is recommended to use absolute focusers since their absolute position is known on power up. In INDI, the focuser zero position is when the drawtube is fully retracted. When focusing outwards, the focuser position increases, while it decreases when focusing inwards. The following focuser types are supported:

To begin the autofocus process, simply click the Autofocus button. 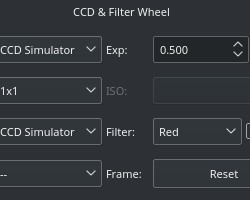 You must specify the CCD and Filter Wheel (if any) to be used during the focusing process. You can lock a specific filter within the filter wheel to be utilized whenever the autofocus process is invoked. Usually, the user should select the Clear/Luminescence filter for this purpose so that Ekos always uses the same filter to perform the autofocus process. This locked filter is also used in the Alignment Module whenever it performs any astrometry capture.

You may also select an Effect filter to enhance the image for preview purposes. It is highly advisable to turn off any effects during the focusing process as it may interfere with HFR calculations. For DSLRs cameras, you can change the ISO settings. You may reset the focusing subframe to full frame capture if you click the Reset button. 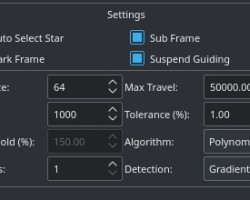 You may need to adjust focus settings in order to achieve a successful and reliable autofocus process. The settings are retained between sessions. 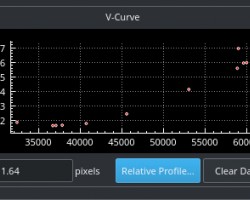 When framing, the horizontal axis denotes the frame number. This is to aid you in the framing process as you can see how HFR changes between frames. 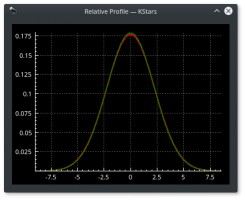 The relative profile is a graph that displays the relative HFR values plotted against each other. Lower HFR values correspond to narrower shapes and vice-versa. The solid red curves is the profile of the current HFR value, while the dotted green curve is for the previous HFR value. Finally, the magenta curve denotes the first measured HFR and is displayed when the autofocus process concludes. This enables you to judge how well the autofocus process improved the relative focus quality.