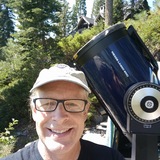 On chip upgrade: Ah that is good to know! I did just find "Application Note: Using the Advanced Menu to set the Camera Configuration" with a google search. Apparently CCDOps has an "/advanced" command line option which causes a new "advanced" menu to appear. This menu has a "camera configuration" command which can update the camera EEPROM (camera type, anti-blooming flag, tracking chip type, power-on cooling mode). Maybe the camera type could simply be changed from ST-7 to ST-8. Does that sound familiar?

Audine: so cool! So you built one huh? But trying to stay on topic, I agree a thing like the pic+FTDI (or modern equivalent) would be perfect here. The missing piece is IMHO the SBIG USB/ethernet message format/protocol, so this device could plug right in to SBIGUDRV and all the software built to use it. (I did ask DL if they might consider releasing the network protocol specification a few months ago and they politely declined).

I was referring to a parallel cable between the parallel port board I added to the Pi and the camera. Sorry if I wasn't clear - I gave up trying to find a USB to parallel converter that works with the Linux kernel "parport" driver stack. That is what "sbiglpt" (SBIG parallel port Linux kernel driver) wants..

Even if we could find a USB converter, I think it's likely not to work. The sbiglpt "bit bangs" its protocol, polls bits on the parallel port in busy-loops, etc.. If access to those bits becomes a USB hop away, there may be issues meeting the camera's timing, busy-waiting too long in the kernel (or timing out), etc..

There are all manner of fun projects possible here though, such as replacing the raspberry pi in my solution with a microprocessor that speaks SBIG's USB or ethernet protocol on one side, and the camera parallel port protocol on the other. However that involves some reverse engineering of the USB/ethernet protocol and so would be pretty labor intensive. I went with the Pi because it allows the old sbiglpt driver to be reused with minimal effort, and the Pi can serve as an adapter that provides an INDI camera device.

p.s. thanks for the CCD info. I actually bought some class 3 KAF-1600 chips on ebay and took my camera apart. There's a fixed program 8052 clone in there (Philips SB7C752-1N28), a PLD, and a Lattice ispLSI 1016 CPLD. Looks like only the CPLD is programmable so I wonder if chips have to be replaced to upgrade the CCD, or if maybe it's just a matter of updating some EEPROM in the CPLD?

Cool!!! I do have an ST7 here doing nothing and would love to give that a try. I think I'll open it up the CCD compartment and see what's in there!

Any tips? KAF0400 and KAF1600 have different pinouts, and how'd you trick the SBIG micro into recognizing it?

I was thinking the same thing, and I did change the driver so that it does its I/O through the "parport" driver stack rather than directly accessing the x86 legacy register addresses. However, I was disappointed to discover most USB parallel port adapters don't plug into the parport stack. Instead they look like a USB printer to the OS.

I went another way and designed a parallel port "HAT" for the raspberry pi. I have a prototype that works with PHD + indi + sbigudrv reliably as long as the cable is really short. I'm working on a second revision of the hardware that hopefully will have better electrical characteristics.

This project is over here (with driver and board layout):

FWIW I do have the sbig parallel port driver working over here:

Modern sbigudrv (for example the indi packaged one) seems to still include support for it.