Controlling your telescope with a joystick

INDI library v0.9.7 or above supports joystick integration under Linux. To control your telescope under INDI, you need the following:

So, how do you control your telescope? In this tutorial, I will be connecting my ThurstMaster Wireless Joystick to an LX200 GPS telescope.

2. Go to Device Manager under the Tools Menu --> Devices.

3. Select your telescope driver from the Telescope devices tree.

Make sure that both drivers are selected. After selecting the telescope driver, hold Ctrl, and scroll down to the auxliary tree, expand it, and then select the joystick driver.

6. Connect and test your joystick driver. 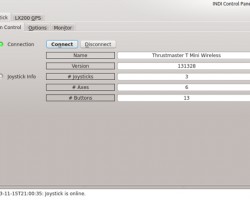 Here, the driver connected successfully to the wireless controller, which has three joysticks, and six axis (each joystick has 2 axis), and 13 buttons. Next, we need to see if the driver reads the joystick input property. Click on the monitor tab, and start playing with your joystick: 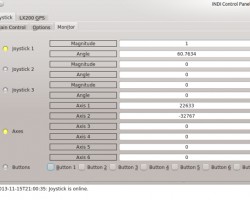 As illustrated above, I was moving joystick #1 on my controller, and it showed the angle and magnitude of my motion. The numbers do not matter, what matters is to know which joystick on the physical controller correspond to which property and joystick number # within the driver, because we will use this information to map telescope actions to specific joysticks and buttons on our controller.

Next, select the telescope driver tab, then select the Options tab, and Enable the joystick support. 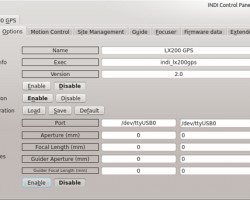 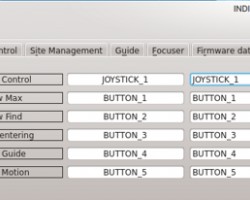 In the LX200 GPS driver, the NSWE Control, which is used to move the telescope North/South/West/East is by default assigned to JOYSTICK_1. Buttons #1 to #4 are assigned to different slew speeds. Finally, button #5 is assigned to the Abort Motion function. Here you can change the settings per your preferences. Just make sure you do not put JOYSTICK_# where it is expecting buttons and vice versa. How to find out which joystick is which number? You can find this out in the Monitor tab of the joystick driver, just move the joystick you prefer around a bit and check which number it is assigned to by the driver, then simply put the joystick name (JOYSTICK_1, JOYSTICK_2...etc) in the field you wish to map it, and that's it! The same is applicable to buttons.

Now you are ready to control your telescope! You can test your control by click on the Motion Control tab in the telescope driver. 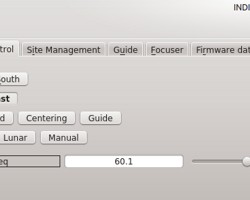