Dithering changes in the beta code

Dithering changes in the beta code was created by Hy Murveit

I have submitted a change to the dithering behavior in Ekos (of course, in the beta codebase). For those of you who run beta code, please test and let me know if you have feedback. Here are the changes:

When dithering is activated, after a capture is completed, Ekos suspends guiding and capture, computes a random pixel offset, and moves the guide-star target position by that offset. It then uses standard guiding code to move close to that new target position, sending guide pulses to correct the pointing position until it is within a pixel in x and y image coordinates of the desired position. It may take several guide pulses to reach the new target position. Once the position is reached, guiding is resumed and then a new capture is started.

It is possible to disable guiding in RA or DEC, or disable one of the directions (east or west, north or south). When one guiding direction/motor is disabled, not only does Ekos not guide in that direction, but it does not send dither pulses in that direction (even though it may still decide to add a random offset in that direction--which is a bug). That can cause a situation when dithering will fail because it cannot achieve the desired dither offset.

Change #1: One Pulse Dithering. Since the dither target position offset is randomly computed, it is not critical to reach the exact random dither position. Therefore when dithering, Ekos will estimate what single RA & DEC pulses are necessary to move to the randomly generated position, and issue those pulses. However, it will not iterate with more pulses to refine the new target position. It will begin guiding from the position that was reached with the dither pulses, and use that as the new target position. This should result in simpler, more reliable and quicker dithering, with the same benefits of dithering. It is possible that some dither moves are less than originally randomly generated, e.g. due to backlash, but overall the dithering should continue to be effective.  This change is controlled by a new checkbox, see below, which defaults to "off". In future releases, assuming this works well, my intention is to remove the checkbox and only use the new behavior 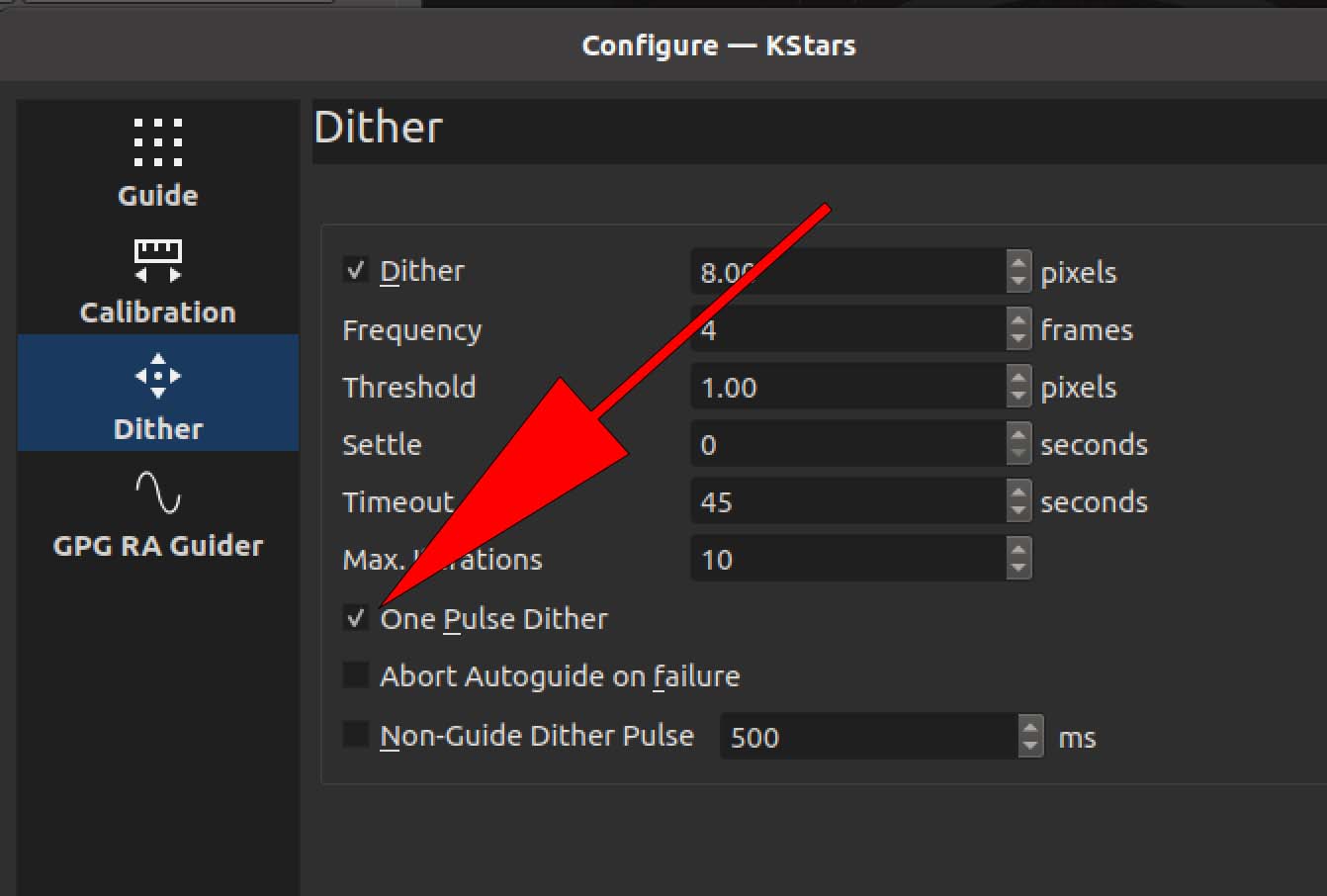 Replied by S on topic Dithering changes in the beta code

I think these changes makes perfect sense, so thanks for that!

When you submit something like this, will it automatically end up in the next kstars/indi/ekos release or will it go through some testing and a pull request before it appears in the stable release?
4 months 1 week ago #79148

It went through some testing, and a code review by Jasem, and now Jasem has merged it into the beta (nightly) release, where it is accessible to adventurous KStars users who are willing to use/test the beta/nightly releases, e.g. see the "Nightly Build" section in indilib.org/download.html, or who compile their own versions of KStars. I will continue to test as well, skies permitting. At this point it is part of the next planned stable release, but, of course, if issues arise during the beta test period (the time between now and that release) I will try and address them before that stable release is complete.

This thread is my attempt to encourage folks to test this feature further before that stable release.

Replied by hades on topic Dithering changes in the beta code

Thank you Hy, the second change is exactly what can resolve the problem described here: indilib.org/forum/development/9054-enabl...ion-is-disabled.html
4 months 1 week ago #79155

Hi Hy, just a quick question: what is the algorithm for calculating the dither pulse length? Is it based on the last calibration or does it factor recent guiding / GPG data?

Also, it would be useful to understand how far the dither actually moved as in the current process if you asked for 8 pixels you know you got 8 pixels or a dither fail, but with the proposed change you won't know what you actually got. If you got 7 or 9 pixels then that's probably fine but if you got 1, you may want to adjust something to get nearer to the 8 rather than get a night's data with significantly different dither. Obviously, this could just be a log message, or on the Drift plot where it says "Dither" it could say by how much.

Obviously, some of the configuration parameters on the Dither tab won't be relevant if "One Pulse Dither" is checked (Threshold, Timeout, Max Iterations).
4 months 1 week ago #79161

Yes, your earlier thread was the kick in the pants for me to make this change--I had been thinking of simplifying the dithering for a while but hadn't done anything. Thanks.

Yes, the dither pulse length is computed by multiplying the previously calibrated "milliseconds of pulse per arcsecond of movement" by the "desired arcseconds of dither movement". It would be nice to use recent guiding data to update that calibration, another thing I've dreamt of doing (that is, adapting the calibration based on observed performance) but that is not currently done.

If one has debug logging enabled for guide, then the actual (realized) dither amount is shown in the log. It will differ for each individual dither. I don't think it's important for the end-user to know what each dither realized, even if in some rare events  you got 1 instead of 8, but you can look in the log if you wanted to (see below).  I didn't modify the code that computes the desired dither amount, but it is here:
invent.kde.org/education/kstars/-/blob/m...ernalguider.cpp#L230
Basically it tries to dither by the amount requested in a random direction, subject to a "MAX_DITHER_AMOUNT constraint on each axis.

The desired dithering and the realized dithering can be gleaned from log messages. Here's a few lines pulled from a (simulator) log:

I've used the One Pulse Dither on two or three sessions and up until the last session it worked well with no failures. In my most recent session I noticed a couple of times that I was getting "dither failed" messages but at the time I assumed that this referred just to a specific frame so didn't take too much notice of it. I saw 2 of these messages.

I've just been processing the data from the session and I see that there are quite a lot of frames that didn't dither. It would appear that once a dither failure occurred, dithering got suspended (although on screen I believe I was still seeing dithering messages indicating all was working fine - but I may be mistaken on this). When some event occurred like a filter change + refocus or a MF it looks like dithering resumed as normal.

It may be that this is how it's meant to work. I've used dithering for a while now but only ever had it fail in the last session so can't compare to the previous version.

Anyway, appreciate any thoughts on this.