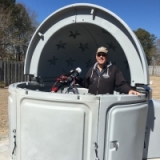 Ron Clanton replied to the topic 'New Focus Algorithm in Ekos' in the forum. 2 weeks ago

Thanks John. Yes, there is also a polling period setting in the Celestron focuser and it is set at 500ms. However, as I listen to the focuser move it is clearly not pausing between the move out and move in. Looks like I need to submit a ticket to Jasem!

Ron Clanton replied to the topic 'How to disable "Abort capture on autoguiding stop"' in the forum. 3 weeks ago

This feature/switch is missing from EKOS. I also would like to see this feature, as I have pretty good tracking without guiding.

You need to use Scheduling, as it has a mechanism that will restart the job if aborted. It's not perfect... doesn't work in some situation, but is better than nothing.

I only use the Celestron focuser with the linear method of my Celestron 8HD Edge. I'm not sure that I would describe it as an issue with the mechanics... the current process just doesn't give the focuser time to complete the "out" movement before it issues an "in" command. It may be working fine and I'm simply experiencing what Doug is describing. However, when I'm sitting at the scope it sounds like it starts reversing before it finishes the out movement.

This is one of those situations where I would think it wouldn't hurt to have a very short (1 sec) pause between commands.

BTW... I'm not fond of the Celestron focuser. I sometimes experience connection issues with INDI... seems unstable. I've ordered an ZWO EAF to replace it on the 8HD Edge, but have been waiting several weeks for the back order to clear.

The ZWO EAF on my refractor works perfectly with the polynomial process.

Thanks for your effort!

Thanks for the thoughts. I have read this article and find it interesting. I guess that I have used "trial and error" for my different scopes and focusers.

Like others, I find that the "one pass" does a pretty good job at finding the best focus. The second pass process, while theoretically valuable, does little to improve the focus. In fact, it usually was the cause of creating an error, aborting and restarting the process.

Thank you. I understand the process... but in my case, when it does the "backlash hokey-cokey" it moves out then in so quickly, that I don't think the focuser has reached the full "out" setting. I think it would benefit from a move out, pause 1 second, move in... to assure that it getting the full effect.

Ron Clanton replied to the topic 'Focus after flip?' in the forum. 4 weeks ago

Thanks! Will it be included in the next update?

Ron Clanton created a new topic ' Focus after flip?' in the forum. 4 weeks ago

Over the last couple of nights, I just noticed something. I have my scheduler check boxes set to automatically track, focus, align, and guide. It does all of this correctly at the start of the job. However, I just noticed that it doesn't perform the focus at the meridian flip. It performs the track, align and guiding just fine. I'm wondering if others have this issue? It's a problem for me due to the mirror flop on my SCT... the images are usually not in good focus after the flip. I have periodic focusing setup in the capture tab, so it eventually focuses... but I lose several frames until then.

Agreed. Seems that the first pass calculation is really good... then it should move way out (to eliminate backlash) and then back to that point.

One additional thing that seems to happen to me... When it currently moves way out, then in, it doesn't wait for the focuser to hit that "out" position. Which means it doesn't always eliminate the backlash. Perhaps you could put a small pause after it moves out... before it moves back in?

Does that make sense?

Ron Clanton replied to the topic 'KStars still not handling cloudy nights well' in the forum. 1 month ago

Yeah, I may have to revert to your method. I had high hopes for the alignment check, but either it's not working... or I'm doing it wrong.

Ron Clanton replied to the topic 'KStars still not handling cloudy nights well' in the forum. 1 month ago

I tried your tip tonight... and it didn't work. I see no indication of it checking alignment. Are you sure that there is no other setting and/or check box that needs addressing to make this work?

So I've been using the new version (1.7) for a few nights and have been happy with the results. It seems that if I have clear nights, then everything works well. However, on Thursday night we had some clouds pass through... and things went south. As best as I can tell, EKOS began losing the guide star intermittently and then reacquiring it and begin guiding again. Up to a point, it worked correctly... trying to find the guide star and aborting the capture... then restarting. But then it lost the guide star and slew the scope far enough to put the object out of the frame. Then it started guiding again and capturing again... in the wrong place. After about two hours, it lost the guide star again and, apparently, aborted the job. The scheduler restarted the job, realigned and worked properly from then on.

I understand everything that happened except the radical slewing. Why didn't the guide slewing limits in PHD2 work? Shouldn't the pulses shut off when it loses the guide star?

I've attached the log... hopefully, someone can figure it out.

Ron Clanton replied to the topic 'Analyze tab' in the forum. 2 months ago

Yeah, that is weird. I'm using the latest stable version of StellarMate OS. Of course, I didn't keep a log this time... bummer.

It was a pretty simple scheduled run and I watched it do everything (focus, align, guide) successfully. I'll get a log next outing. It won't be for a couple of weeks, as I'll be traveling.

Ron Clanton replied to the topic 'Analyze tab' in the forum. 2 months ago

Hy,Here is a screen shot from the file last night.  It's weird, because now it shows the focus on for the whole session!  Must be a display issue.  The analyze file is attached.  I see the completion, but not the start.Thanks,Ron 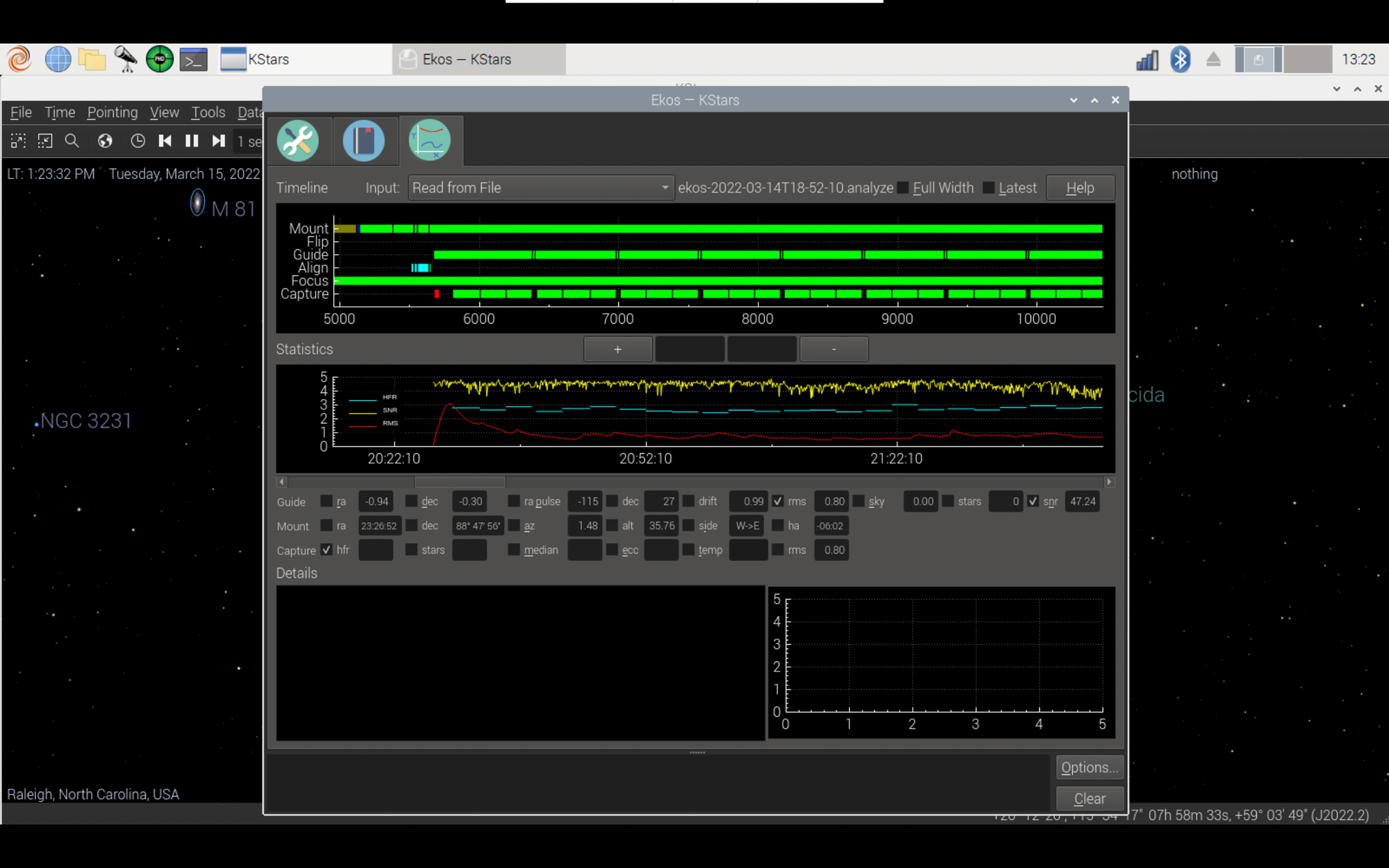 Ron Clanton created a new topic ' Analyze tab' in the forum. 2 months ago

A pretty minor issue, but I just noticed that the focus bar no longer is showing in the Analyze tab.  Anyone else notice this?  or is there a setting that might have got switched off?