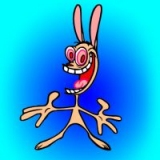 Phil created a new topic ' Is The Player One Driver Updated To Recognize The IMX585?' in the forum. 2 hours 30 minutes ago

Title says it all. I'm considering getting the new Uranus-C camera, which runs off the IMX585 sensor. Has the Player One driver in Ekos been updated to recognize this camera?

Hi folks, if I'm guiding via PHD2 in Ekos and I want to change the guidecam settings like gain and contrast, if I change them in the Ekos Profile Editor, do they have affect in PHD2, or will PHD2 automatically select the gain values it wants? I see no settings for gain, contrast, etc. in PHD2.

Phil replied to the topic 'Plate Solving With An SV305 Planetary Camera As Primary Camera' in the forum. 1 week ago

Well my modus operandi is to have two profiles, one with the SV305 as the imaging camera and CEM26 mount (for plate solving to position), and a separate profile with an ASI120MM camera set as the guide camera with the CEM26, sans main camera. I can also apply a sim camera emulating the '305 FOV, but that's not really important. Once plate solved with the '305 as the main camera, I would switch profiles, start autoguiding with the ASI, and connect the '305 to AstroDMX.

However running some tests I'm seeing massive CPU usage and rising temps when running simulated shooting sessions with AstroDMX, as you can see below. When idle at shooting speed, CPU usage is around 85%(!) the temps are up around 65°C(!). For some reason CPU usage drops somewhat when actually shooting. There's slightly less CPU overhead at 8 bits, but "the song remains the same". Some formats are more taxing than other. 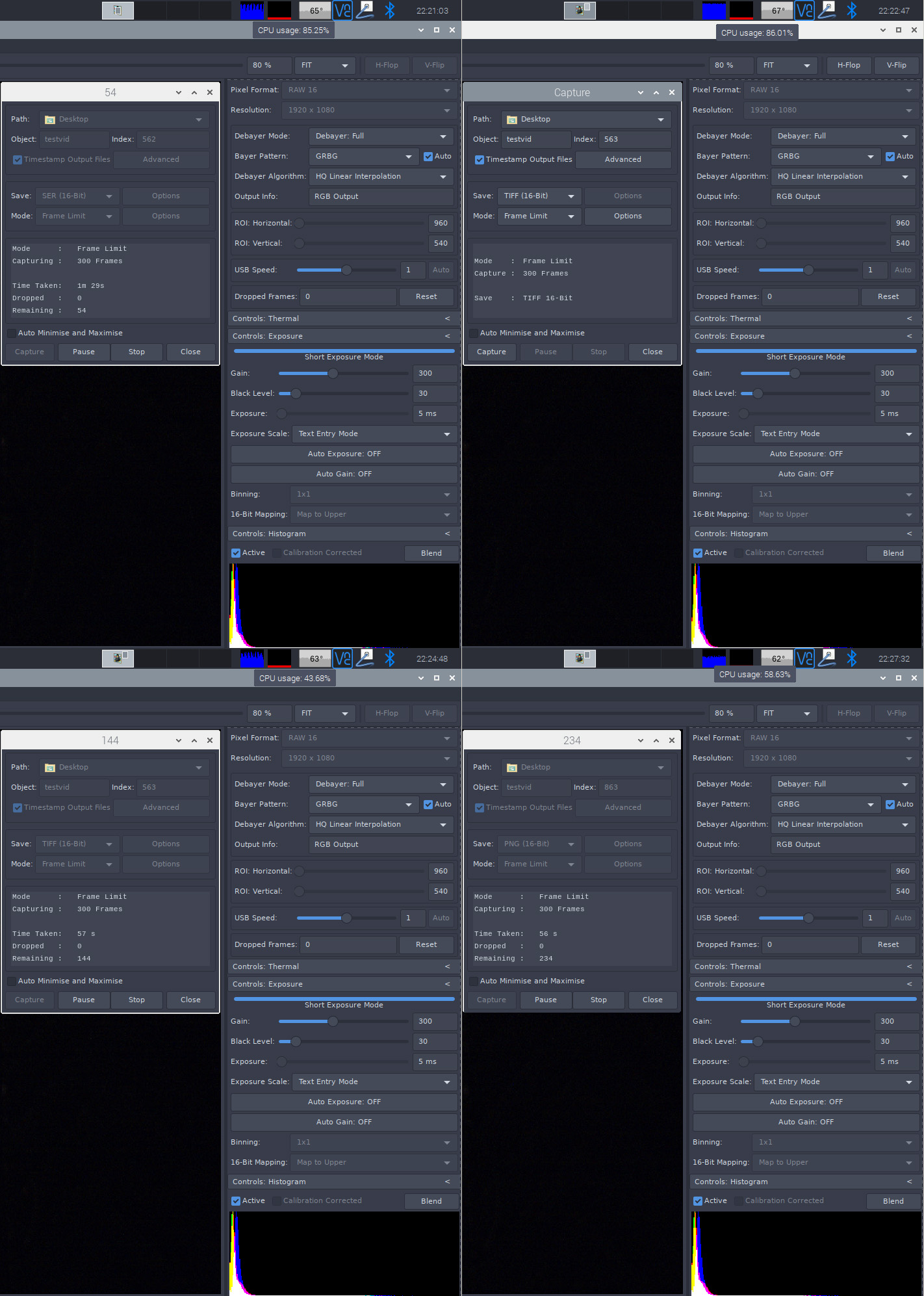 Phil replied to the topic 'Plate Solving With An SV305 Planetary Camera As Primary Camera' in the forum. 1 week ago

Thing is, I can't tell if Ekos will be able to solve, because I can't really see what it's recording. If I set the FITS viewer to debayer I can see something, but honestly I don't know if it's sufficient for Ekos to plate solve. I have the 305 on the C5 with a 2X Barlow, so I have a very narrow FOV. I have the entire astrometry database, but I think it will have to blind solve, assuming it can see something. I actually plan to shoot with AstroDMX, but first I have to get the camera locked on the target, hence why I want to plate solve (and guide) with Ekos. I would have no idea otherwise how I would find a needle like Jupiter in a haystack like a 2500mm scope with a 1/2.8" sensor attached to it.

Phil replied to the topic 'Plate Solving With An SV305 Planetary Camera As Primary Camera' in the forum. 2 weeks ago

So does Ekos know how to properly use the FITS image data to plate solve?

Phil created a new topic ' Plate Solving With An SV305 Planetary Camera As Primary Camera' in the forum. 2 weeks ago

Hi folks, I would like to use my SVBONY SV305 Pro camera as a primary camera. In order to use it as such, and especially to be able to plate solve with it, do I need to set AUTO DEBAYERING to ON in the FITS configuration settings? What about AUTO STRETCH? Are there any other particular settings that should be on, off, or set to a given parameter?

Thanks for any info on this. 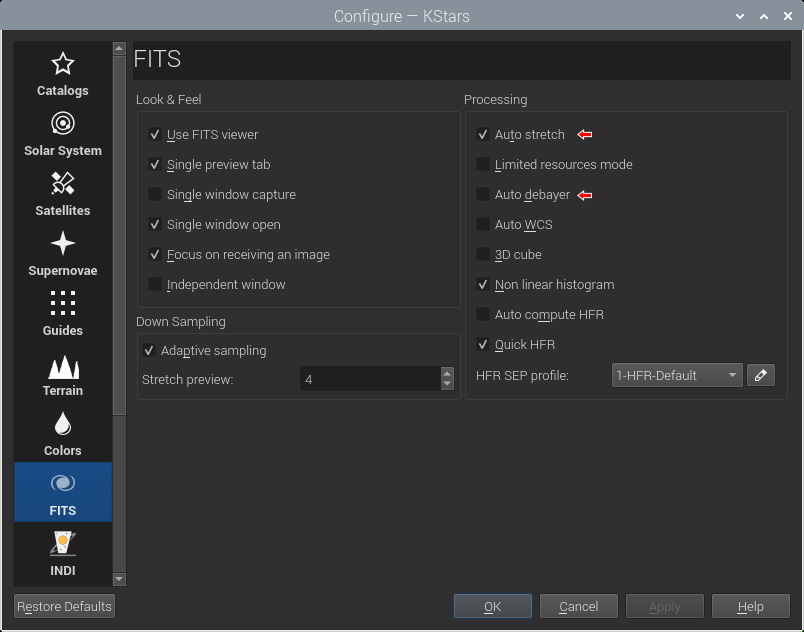 Phil replied to the topic 'Delta RMS Threshold' in the forum. 2 months ago

What kind of load is on your rig? Are you at the halfway point, or at, or surpassing, the load limit? My friend was over capacity on the Star Adventurer. We think think that's the problem.

Phil replied to the topic 'Delta RMS Threshold' in the forum. 2 months ago

What mount are you using? Are you well balanced and within the mount's weight capacity? We believe the problem with the Star Adventurer was that it was overloaded and mistracking, causing the guider to autocorrect, probably making the situation worse. We have yet to try and confirm this with a lighter load.

Phil replied to the topic 'SVBONY SV905C Camera' in the forum. 2 months ago

That's probably not a bad idea, but just making a note that the SV305 driver will work with the SV905C would be good.

Phil replied to the topic 'SVBONY SV905C Camera' in the forum. 2 months ago

Well to whom this may concern, the driver for the SV305 will work with the SV905C. I was informed of this at an SVBONY forum.

Phil replied to the topic 'Re:Delta RMS Threshold' in the forum. 2 months ago

Taking your information into account, we've surmised that the mount is overloaded and losing track, causing the guider to over-correct, making the entire situation worse.

Thanks for your reply.

Phil created a new topic ' Delta RMS Threshold' in the forum. 3 months ago

I've been chatting with a friend remotely while he shoots, and says he keeps getting an error in the Ekos guider stating "Delta RMS threshold value exceeded. Searching for guide stars..."

He's tracking with a SkyWatcher Star Adventurer via ST4, using an ASI120MM Mini camera. He took a pic of his error that you can see below.

So what exactly does this message mean? 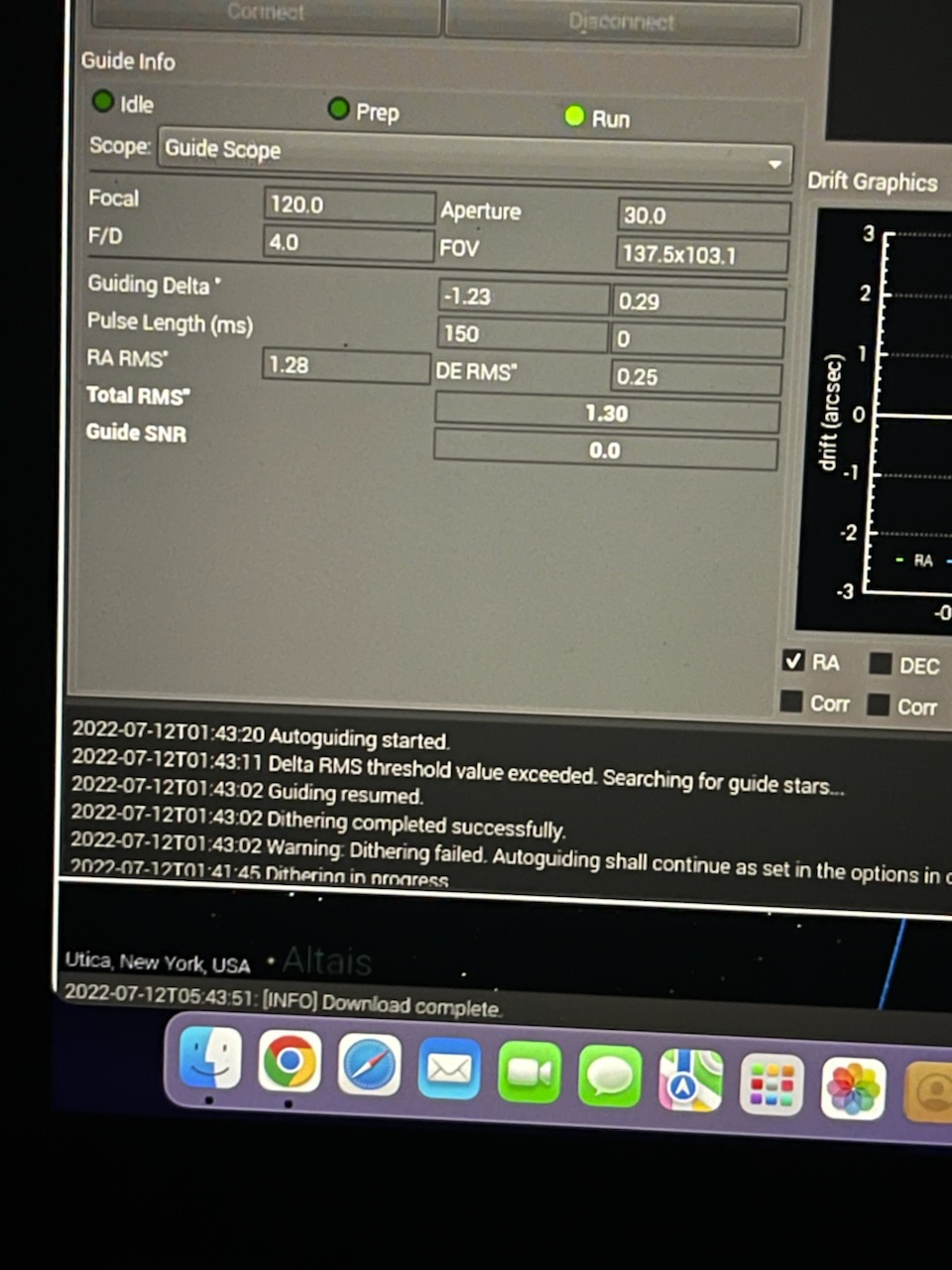 Phil replied to the topic 'INDI Driver for SVBONY cameras' in the forum. 3 months ago

Will this ever be integrated into Astroberry? I just installed astroberry-server_2.0.4.img on a fresh card, ran the updates, but I still don't see the SV905C, only the SV105/205/305 cameras.

Phil replied to the topic 'SVBONY SV905C Camera' in the forum. 3 months ago

Any INDI folk here? It's been over 5 months since I initially posted this, I just downloaded the latest Astroberry ISO and installed it on a fresh card, ran all the updates, but I still don't see a driver for the SV905C. I only see drivers for the SV105/205/305 cameras.

Do you folks ever plan to the add the SV905C to Astroberry?

Phil replied to the topic 'Simulator Solver Fail' in the forum. 3 months ago

I did not realize that the mosaic creator box was syncing up with the KStars data. I noticed however that once the mosaic data was created, the target, coordinates, and sequence boxes continue to have red asterisks next to them, which to me implies it still needs something updated? The boxes did update, and all the tile data was entered in the sequence area. Is it good to go from there? This is just a sim test so it doesn't matter, but I'm curious why the red asterisks remain. 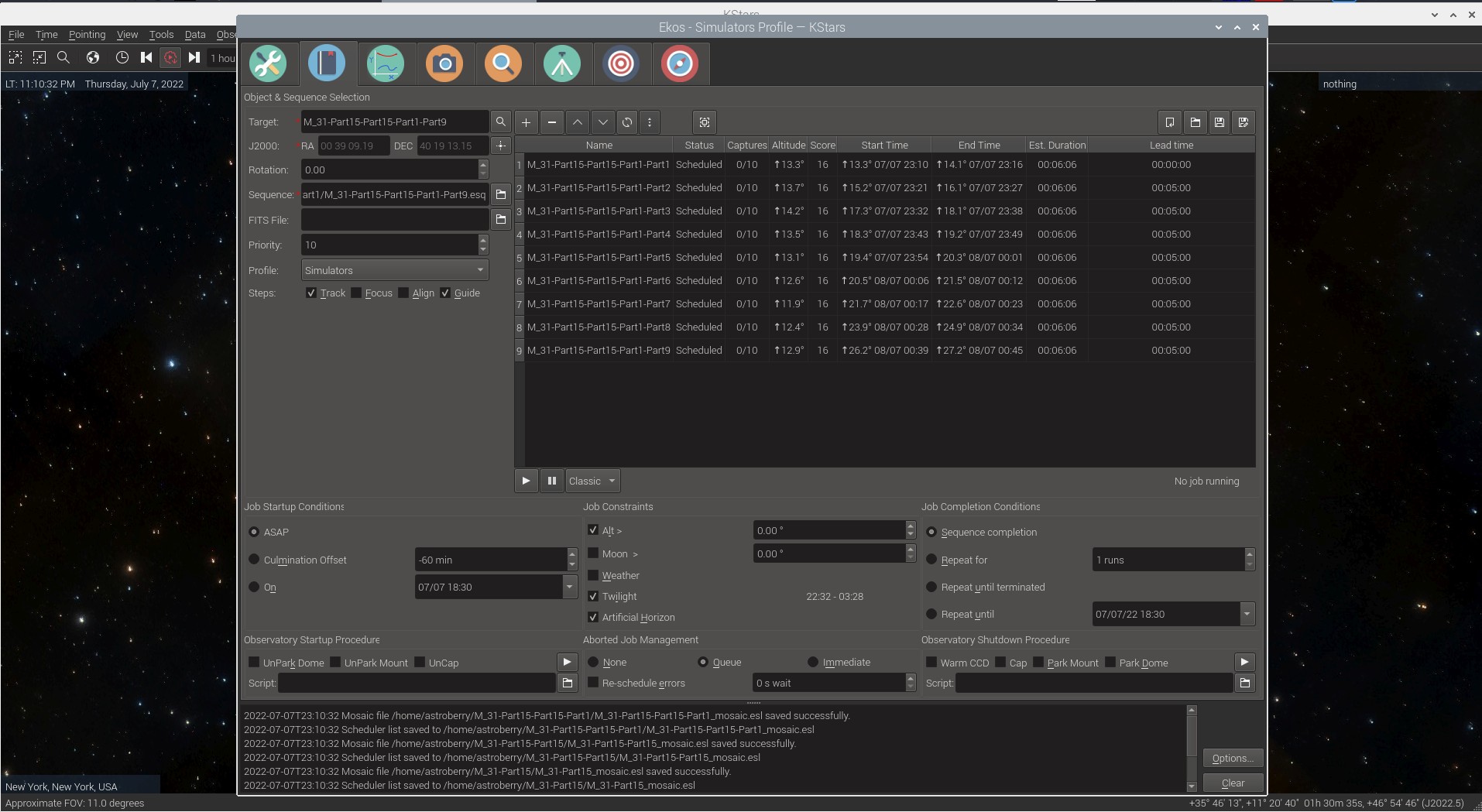