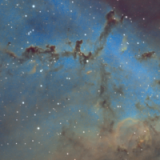 Greg replied to the topic '[SOLVED] Config file direct edit to avoid crash' in the forum. 1 year ago

OK, found the config not in ~/.local/share/kstars but in ~/.config/kstarsrc. Changed to DitherEnabled=false and I'm back.

I'm running a build from a git checkout dated back to Nov 15, 2020. It's been stable enough, but I made a config change (guiding and non-guiding dither enabled concurrently) and Ekos crashes every time with a message they can't be run together. I can't get in quickly enough to disable one or the other.

Is there a way I can revert this in a config file? I can't figure out where it is.

Greg replied to the topic 'Internal Guider in a Distributed KStars/Ekos/INDI environment' in the forum. 2 years ago

Under the guide tab, verify that the "Via" setting is the same method for both setups.

Greg replied to the topic 'Cannot Unpark Mount due to 'Dome Locking'' in the forum. 2 years ago

I have seen something like this as well but haven't dug into it yet. I usually just make sure the mount is unparked before starting Ekos.

What mount are you using?

In my case I am using a paramount with TheSkyX as the connection point.

rlancaste wrote: So based on what I am hearing, different options might be working better for the "load and slew" type function vs the "capture and solve" function?

Possibly a factor is the load and slew images might be longer exposures compared to relatively short captures for alignment?

rlancaste wrote: Thank you for doing some testing!

You are very welcome. It's the least I can do to help out. If only I knew C++... Another year perhaps.


I am confused by your first issue: "BTW - when testing with the simulators I left the Solver Action as "Nothing" but the slew still occurred". I think this is a miscommunication in the interface. If you clicked the "Load and Slew" button then it is always supposed to slew to the target. The selections for the Solver action are only applicable if you click "Capture and Solve"

Agreed that it is probably an interface communication issue. It would probably be better to have the button as "Capture & Solve", "Load & Solve" with the Solver Action section giving options "Slew To Target", "Solve Only", and maybe a checkbox for "Sync" in cases where people want the slew and sync to happen. Probably outside of the scope of this topic though - I was sharing as an FYI.


" after the unwanted slew, the Load and Slew button was now greyed out." So was this after it arrived at its target after the slew you mentioned? The buttons should be disabled while it is slewing, but after it gets there they should re-enable. If not, that could be a KStars bug.

Correct - The slew occurred and failed (because I'm using sims and don't have images set up I guess). The Load and Slew button stays greyed out - only the Capture button can be activated.


" image has some problems including mystery stars". Do you mean that it detected noise as stars? This is certainly possible depending on your selected options profile. We are trying to develop better options, but they aren't quite perfected yet. Did you only try the one profile or did you try any others?

Nope - that first image has some "mystery stars" in them that are not present in other images of the same object. My guess is this is a residual bulk image problem that came with switching the camera's mode? Not sure though. I guess the point is that the solver performed well in spite of these mystery stars. I was surprised it didn't confuse the solver.


"However, this one of the same field does not solve. The main differences I can determine is the median signal of this frame is higher than the other two and the image is rotated 180deg from the others." I downloaded this file and it solved quickly. Which profile are you using to solve?

I'm using whatever default was selected when I built the software with SS included the first time. Looks to be 4-ParallelSmallScale. I find it interesting that some of the images of the same object with similar characteristics solve, but some do not. Maybe these images are right at the edge of some threshold.


" Interesting that it says it needs 19.7GB of RAM. Is that true?" So the way astrometry's "load all indexes in parallel" option is supposed to work is that it loads all your index files into memory simultaneously, at least according to their documentation. This of course will make it much much faster than loading each index file one after the next. But if you have bigger index files than available RAM, this could be serious problem. I am not sure that it always will use that much RAM and if you have SWAP files or ZRAM, that could certainly prevent any crashes that could occur from taking up all the RAM, but I don't want to risk crashes, so in the code right now I calculate how much RAM there is and how big the indexes are and report that and disable the option if it is too much. We can play around with that to see if it really does take that much, but for now, I'm being cautious.

Gotcha. Happens to be I have 32G in this PC and I had forgotten about that detail. It's working, and it's fast enough that by the time I switch back to the Ekos window after loading an image that it's already solved. I'll have to try this out on lower memory systems soon.

Thanks again for your work on this!

Greg created a new topic ' Time freezes in kstars, sort of. Possible GPSD issue?' in the forum. 2 years ago

I'm running builds of kstars and indilib from relatively fresh pulls performed in the last week. This problem may have been occurring prior to now but I'm not sure.

I've noticed that time in kstars will get stuck at some point. Log files and FITS headers seem to continue with the correct time. This morning I found that the LT indicator in kstars as well as the log windows stuck at 21:38:32 LT while it is presently ~07:30 LT. Looking at the camera tab I see the ~20 or so exposures and associated activities (focus, dither) logged at 21:38:32 LT. I had enabled GPS logging, and see the system time being set properly at the beginning of the session, but no indication of time being frozen or other indication that something broke.

This is a short snippet of the camera tab log that shows how the time gets stuck:


Investigating the GPSD tab I saw that most of the fields were gone including lat/long. Unfortunately I didn't get a screen capture. The last log entry showed that GPS fix was obtained about 11 hours prior. I clicked on the Refresh GPS button which caused the GPSD read error to start piling up. Disconnecting/reconnecting the driver fixed it and proper time was re-established. The gpsd daemon itself was stable and showed no issues during this time.

I had been using ASTAP. I switched the solving method to "Internal solver" and left all settings as-is. I then ran Load and Slew and it just worked out of the box - no problems, generally. However, I did find a failure case that I'll share here.

BTW - when testing with the simulators I left the Solver Action as "Nothing" but the slew still occurred. Also, after the unwanted slew, the Load and Slew button was now greyed out. To recover it I had to stop/start the indi services.

The following image solves with no problem, even though the image has some problems including mystery stars.

This one works as well, without the mystery stars:

However, this one of the same field does not solve. The main differences I can determine is the median signal of this frame is higher than the other two and the image is rotated 180deg from the others.

I've attached the log file with Alignment logging turned on. Also, below is from the log window on the alignment tab. Interesting that it says it needs 19.7GB of RAM. Is that true?

Is it possible the system parameters can be discovered through training on a set of data from the optics/camera in use? Perhaps make a tool that consumes a set of data and establishes a custom profile?

Welcome!
Caught a typo - those TSX settings work with both my cadiotrope (corrected dall-kirkham) and refractor (FSQ106).

TheSkyX uses sextractor. In case this is helpful, these are the settings both of my rigs use, one is a cadiotrope, the other is a reflector. 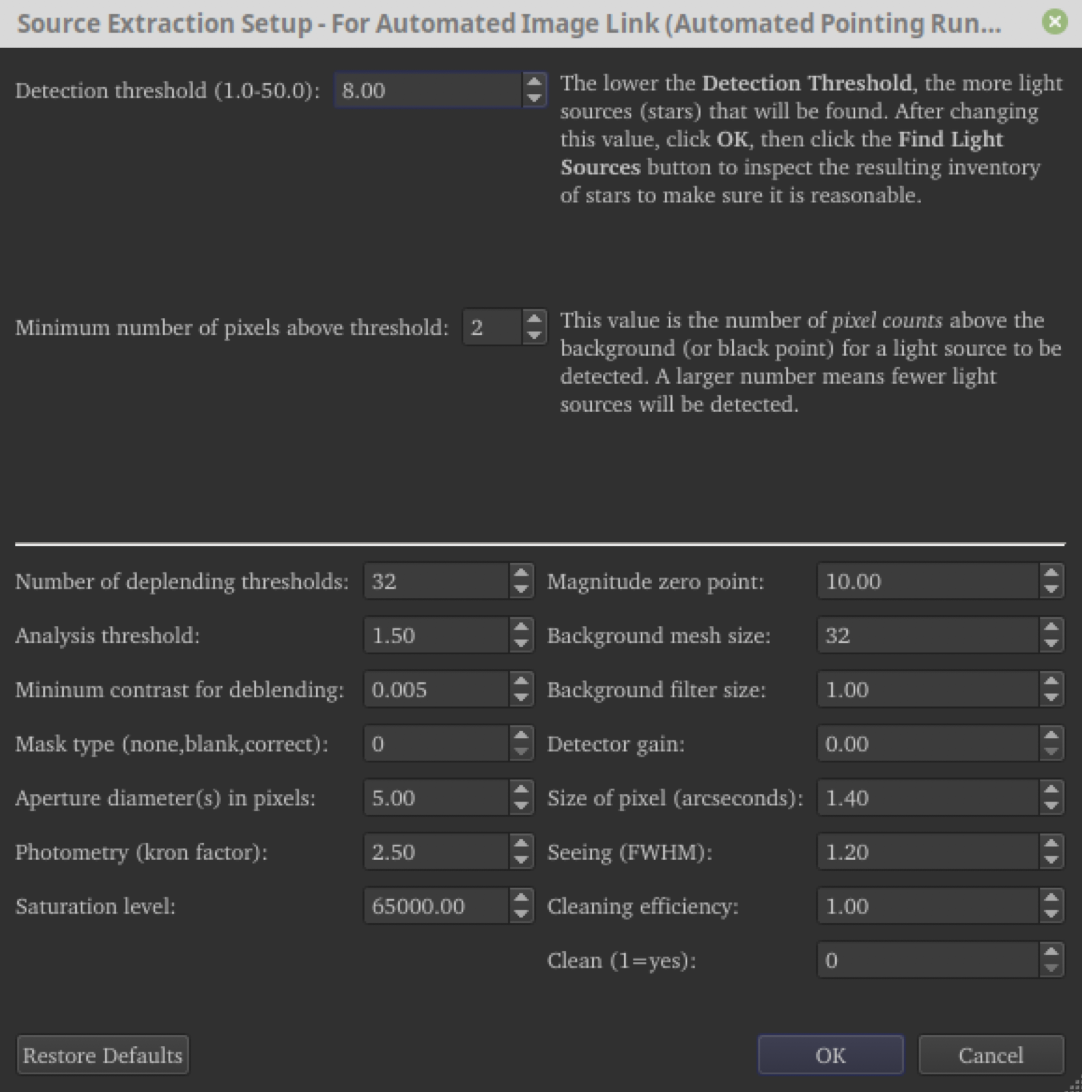 Could be the repository version of stellarsolver is out of date. I see Rob made a lot of commits in the last 24h so that might be it. I ran into the same problem earlier in the week. It's easy enough to install it. Clone this:

Hmm... I just pulled the latest commit and it built with no problems. Do you have the latest stellarsolver library installed?

Greg replied to the topic 'Segfault w/ latest kstars-bleeding & local build' in the forum. 2 years ago

INDI was a bit behind so after I got things working externally I pulled an rebuilt it. Had a full imaging session go smoothly last night. All is working now. Thanks!