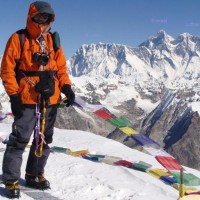 Joaquin replied to the topic 'Meridian flip not happening' in the forum. 12 hours 39 minutes ago

I got my meridian flip yesterday.
It took all the day and many tries, and to consider a lot of parameters I though were involved (most of them with incomplete understanding from my part or not clearly defined)

A major unfriendliness I found was to have to mentally translate hours (in decimal format) to minutes and angles to compare values in different places each with different format. This does not help. Please keep HA on the flip control and mount limits in the hh:mm format, or just use minutes (instead of hours) which is the magnitude of the values I suppose are used to estimate/set flip point and HA limits.

Time and location are critical because they define the position of the meridian and the actual angle of the telescope when pointing to a star. I always has been puzzled by the parameters of my AVX asking for local time, time zone, if time is standard or DST... and wonder if the time calculated from what I entered is in sync with that used in the computer and KStars. I am not and expert but it would not be enough just to enter UTC time and location to calculate everything needed?

At the end I managed to set everything in order the flip to work. It did it reproducibly 3 or 4 times (using a profile with simulators, a GPS auxiliary driver and the AVX mount driver.

Joaquin replied to the topic 'Tips for Auto-Focus' in the forum. 13 hours 16 minutes ago

I am a beginner with autofocus. Still it has worked well (for my expectations) from the beginning.
Only trick is to perform a manual focus before starting the automatic procedure. The range scanned by the automatic procedure is relatively short so you need to start already close to the minimum.
My two cents.

Joaquin created a new topic ' Meridian flip planned but not executed' in the forum. yesterday

(by the way, should not be more friendly and less mentally demanding to be able to set these parameters in minutes (or alternatively hh:mm format) instead of decimal hours?) 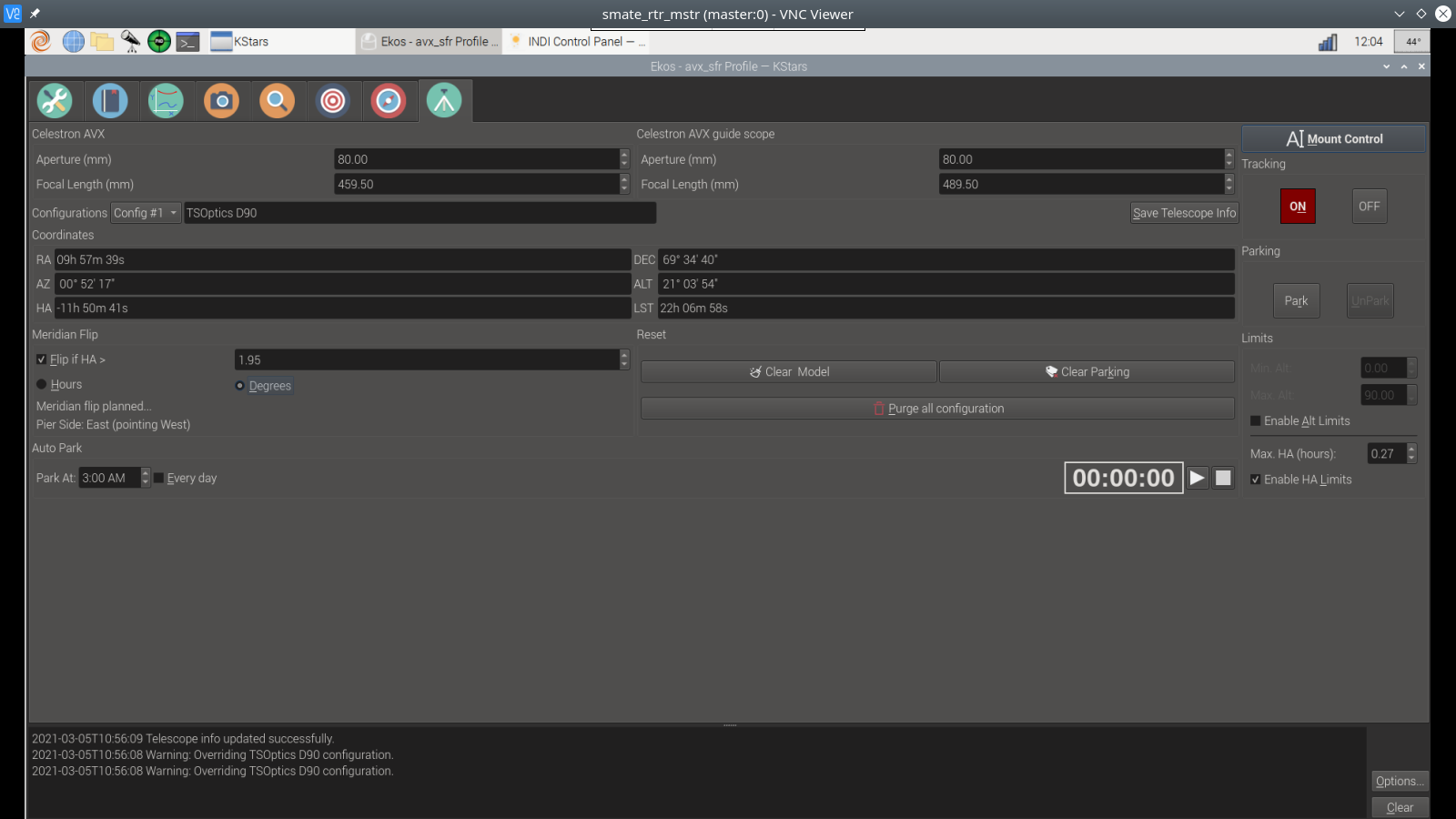 Things seems to go well, with the count down going on but when flip has to happen, the countdown is replaced by:

It stays like this with no other information until limits are reached and the telescope stops tracking...
An nothing happens.

What am I failing at?

Joaquin created a new topic ' 3D Star Profile & Data Visualization Tool: Where is it ?' in the forum. 2 days ago

In the stellarmate support page about Ekos , there is documentation about the FITS Viewer.
There, there is a section about the 3D Star Profile & Data Visualization Tool where it says:

To use the new feature, the user needs to select the View Star Profile Icon in one of the Ekos Module Views, or in the Fitsviewer.

I've been looking around the EKOS modules for an hour trying to find this tool. Same In FITS Viewer: I am unable to find where to activate it.

I would appreciate if someone can help me out.

Joaquin replied to the topic 'CEM40G Does not connect using Astroberry' in the forum. 3 days ago

Sorry I have no experience with Sony cameras.
In any case as you are asking different questions than the one in the title maybe you should consider to ask these questions in a different post.
About crashes, you also get crashes with Stellarmate once in a while. I do not know about driver C++ programming and whether crashes are difficult to avoid/recover even using a defensive style or what. But, in my experience, crashes somehow diminish with time, as you get familiar with the application.

Joaquin replied to the topic 'CEM40G Does not connect using Astroberry' in the forum. 3 days ago

If I understand correctly, your mount is connecting to different USB ports when started. Right?
The answer to this is to map your mount to a usb port using an udev rules file.
In stellarmate os there is a facility for doing this without manually editing files. I do not know astroberry

Joaquin replied to the topic 'Fits save error' in the forum. 4 days ago

That happened also to me once yesterday night.
It happened with the last capture but no with the previous ones.
I had copied it to my PC and I got an error on gimp and on the NASA FITS Liberator. Back to the rpi, KStars crashed when trying to open it.
The file was something like 844 KB (it was taken from the guide camera) while other previously shot, identical files that opened correctly were 855 KB.
I closed EKOS, KStars, and reopened again (not sure if I rebooted). Then, magically, the FITS was showing to be 855 KB and opened successfully.
I would say that saved pictures are not inmediately closed and in this zombi state they produce problems.

Joaquin created a new topic ' FITS previews when saved, save only red channel' in the forum. 4 days ago

When I open a fits file saved from a capture preview in the FITS viewer I get an B&W image with only the red channel
In the picture, right is the preview after shooting; left is the same picture after being saved and opened again with FITS viewer:

This does not happen if the picture is produced using a sequence.
In the picture, left is the FITS viewer showing the Light that was captured; left the same image after being saved and reopened

Am I missing something ?

Joaquin replied to the topic 'Sony Alpha 7iii Set Up Issues' in the forum. 4 days ago

Joaquin replied to the topic 'Fits save error' in the forum. 5 days ago

I also got ‘Image save error: No WCS found’ but the image was saved correctly anyway

Joaquin replied to the topic 'Meridian flip not happening' in the forum. 5 days ago

At the celestial pole there is not RA, or in other words, you can get any RA value when roughly pointing to the pole.
Maybe this is related with your comment when you have your mount at home.

Joaquin replied to the topic 'How to make the simulator behave as a real, imperfect mount ?' in the forum. 6 days ago

In case anyone is interested, I found some hints in this post from @hy.
A more complete documentation of the meaning of these terms can be found in this article from Patrick Wallace .
The INDI simulator tab includes the following terms to define the mount model: 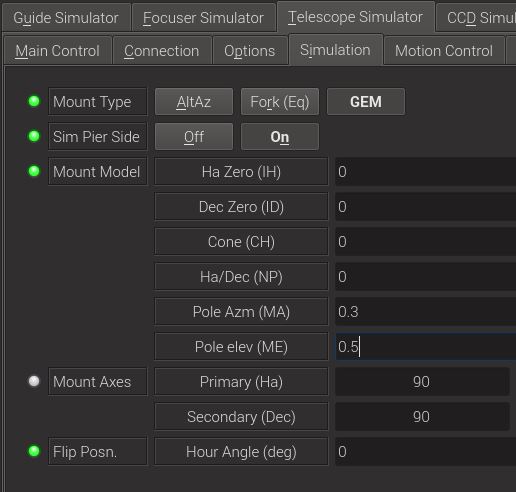 I have transcribed Table I from Wallace which describes the six geometric terms for an equatorial mount:

Where h is hour angle and δ is declination

Extracted from the article:


- IH and ID : zero-point corrections to the hour angle and declination readouts.
- CH: Describes how accurately the telescope optics are aligned within the tube, whether the tube is at right-angles to the declination axis and any east-west displacement of the crosswires, the center of the CCD, or whatever other aiming-point is being used.
- NP: The declination axis is supposed to be at right-angles to the polar axis; NP describes any deviation from this condition.
- MA and ME: describe how far the polar axis is from the true pole, up-down (ME) and left-right (MA).

In the above tables, each of the coefficients is a small angle, usually expressed in arcseconds.
The formulas for Δh and Δδ give the corrections to be added to the telescope readouts.
The set of coefficient values and the formulas constitute the telescope's pointing model...