Andrew created a new topic ' Get INDI to talk to Python script' in the forum. 6 months ago

I have a custom mount with stepper motors controlled by a Raspberry Pi and Python script.

What would be the best way to get INDI to "talk" to my Python script so I can control the mount from Kstars/Ekos/INDI?

Thanks for looking into this. I've tried all the Orion SSxx drivers with no luck. It's weird that it works just fine on my Windows and Linux machines.

Thanks for the info. I guess I'll be switching to PHD.

I've noticed problems with this driver/camera on Windows and Linux. The solution was to manual build the driver from the source code and that solved the problem. I just don't have a clue how to compile from source on a Mac.

I know this is an old thread, but I'm having the exact same problem and all Google searches keep pointing to this thread. Was there a solution to this? The thread just seemed to die.

I've run the Device Manager feature in Kstars and also from the command line, both seem to find the camera just fine. Mac OS also lists it as a functioning USB device.

Maybe the problem is with Ekos/Kstars,? Not sure how they talk to indi-server.

I would post all the logs / screenshots, but they are exactly the same as the original poster. I'm running all the latest version for Mac OS

Again, apologies for dredging up an old thread, but don't know where else to turn.

Andrew replied to the topic 'indi_celestron_aux' in the forum. 8 months ago

Same issue as Rob. There's a phantom "hard stop" just past the meridian. There's no deceleration, just an instant stop (like it hit something) and even the virtual hand controller won't move past it.

Andrew replied to the topic 'indi_celestron_aux' in the forum. 8 months ago

I tried logging the mount but got an error message.

I manually created the directory it was looking for and did a few mount commands, but didn't see any log files in that directory. 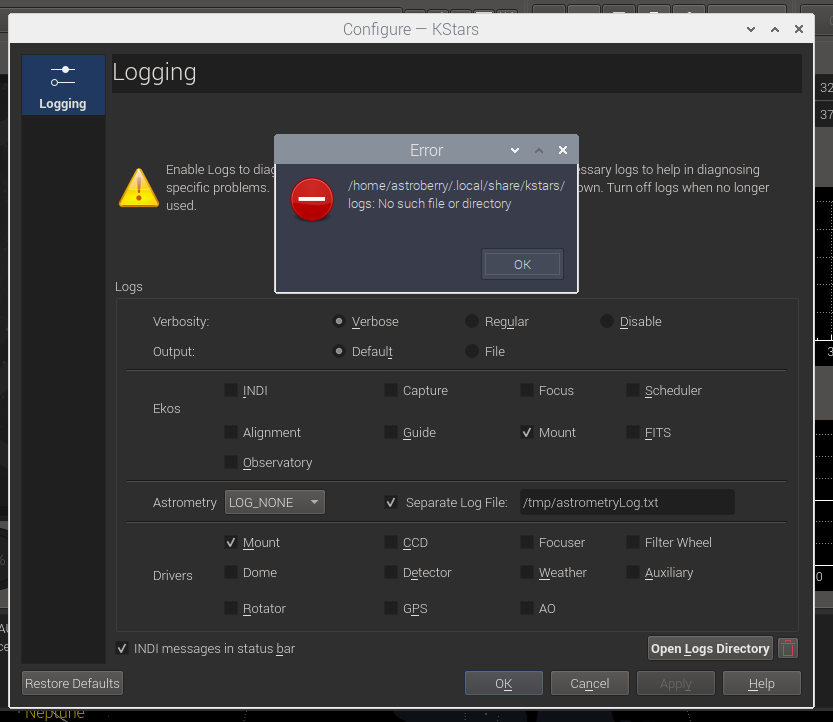 Andrew replied to the topic 'indi_celestron_aux' in the forum. 9 months ago

I know this is a few months old, but I'm having the exact same problem. I'm connected to a Celestron CGEM with the "SkyLink" WiFi adapter plugged into the Aux port and using the INDI "AUX" driver. Everything connects great and the mount moves in the right directions when using the virtual hand controller. I can sync to a star and it shows the correct RA/DEC values, but as soon as I tell it to goto a nearby star (only a short distance away), the mount shoots off in the opposite direction and I have to mash the STOP button to stop the camera crashing into the mount.

I've gone back to connecting through the hand controller with a USB/Serial ST4 cable which works great. Downside is you have to align with the HC first before using INDI.

One thing I did catch out of the corner of my eye, was when doing a goto, the virtual hand controller flashes "error" for a fraction of a second and then immediately changes to "slewing"