INDI monthly update. In addition to driver improvements, major code refactoring is in progress by @pawel-soja to modernize and improve INDI aging code.

Replied by monje on topic First impression on Kstars+EKOS+INDI

milosz wrote: Hi All,
[.....] On my small screen it almost completely covers the kstars map. When I try to minimize the ekos window, kstars also gets minimized, so I can’t use the map. That is pretty annoying

I have same issue, also with LXDE and Debian testing (buster).

I have no idea about the cause. May be desktop problem and/or a incompatibility with some of the KDE libraries that kstars/ekos use...

Any way, waiting for the problem to be solved, I found a dirty trick that satisfies me.

I maximize the kstars window. Then I open ekos and also maximize its window (this suits for me, since I run them in a netbook with small screen). Then, instead minimize the ekos window in order to can operate with the kstars one, I roll it up...

With LXDE (really, with the Openbox window system), you can roll up/out a window by selecting the option in the menu showed when you do right click in the window tithe.

For you convenience, you can also put a "roll up/out" icon in the window title bar (similar to de minimize/maximize/close ones). For configure this in LXDE you can go to Preferences/Openbox Configuration Manager/Appearance and add a "S" in the Window Titles box.

This was a great post. These crash fixes? will they appear automatically in a update download? Mine crashes often as well. On the PI I assumed it was the low amount of ram in the device but on my desktops that's not surely the problem. Glad it is being worked on.

My question is I click SERIAL PORT ASSISTANT? and I never see anything from it.

RE: Indi server doesn't open sometimes... I have this and if I move a window I'll find it's because there is a small pop up behind it. If I click "OK" on that pop up it works again. For example I just forced it to happen and when I moved the Ekos window. (Indi panel would not appear) I see "indi service message -- Kstars "No ASI cameras detected power on?"

I've had this happen when other little pop ups are hidden and don't appear on top of all windows.

So the start/stop menu atop ekos... There is a start... then a cloud (live) then control panel (doesn't work) and then serial assistant (never works for me).

Another issue I am trying to get verbose logs to track down issues. I clicked "indi msg in status bar" will I get log files as well? Here's the issue. I click OPEN LOGS DIRECTORY (and nothing ever opens?)

UPDATE interesting. I cilcked "DELETEL LOGS" I said yes. Now the logs directory button works. (of course there is nothing to see). !!! ???

I really want to use this combo too. I had a working setup. I've a pain not being able to image however we might get one clear sky a month this time of year so my down time is acceptable at this point. If I can't work out the bugs by the end of the month I'll probably be forced back to 12 applications all running with windoze. = (
AP Mach1 / CP4 APCC & PEMpro.
EXP SCI - ED152cf APO - Celestron 11" RASA - Stellarvue 80mm
Baader F2 HS NB filters, Lodestar X2 guide camera / OAG - ZWO 290mm mini
ZWO ASI1600MM Pro / ASI174M (solar) / ASI094MC
NEXDome, CLoudwatcher, AVX mount/ASIair and Stellarmate

I don't have any window issues? Actually to my amazement. (I've powered down and up the nuc for the night) powered up devices and mounts and for some reasons - my mount is now working.

Regarding minimizing the EKOS window, there is an option that must be checked within KStars configuration. There is also one for the INDI control panel. 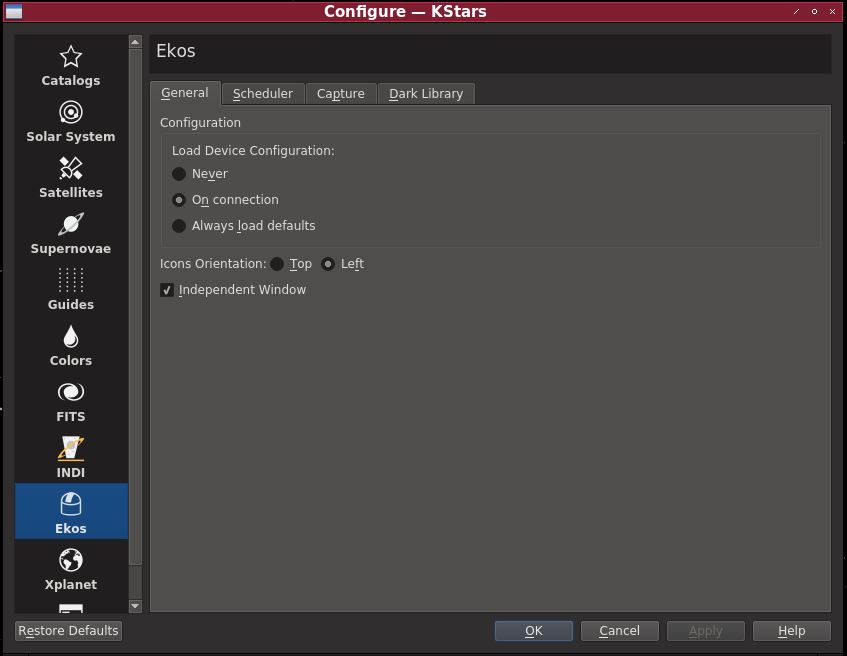 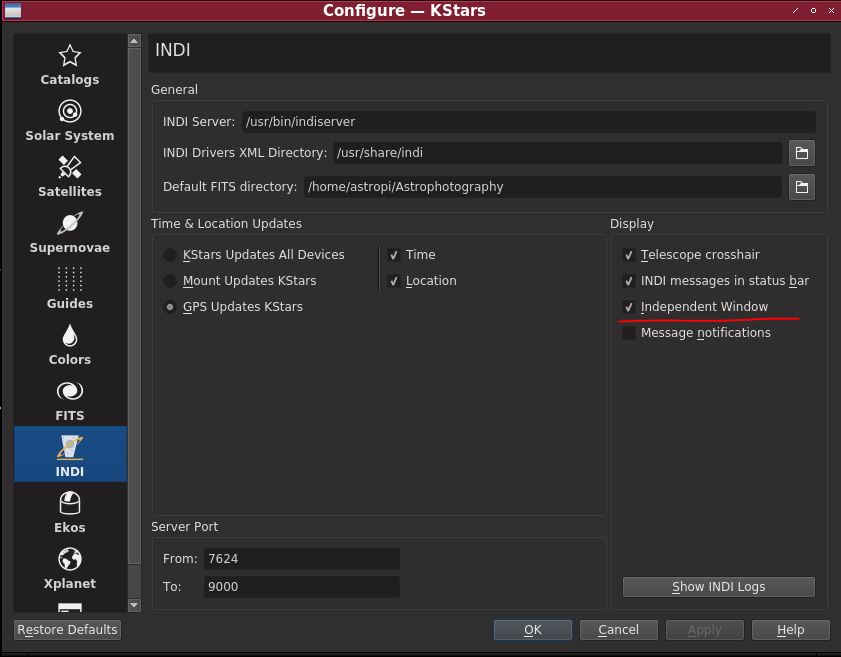 Replied by monje on topic First impression on Kstars+EKOS+INDI

Some of these issues might be more window manager related rather than KStars/Ekos. A dialog box that has focus and must be dismissed or acted upon before other windows can become active. I tend to use control-k and control-i to toggle the Ekos and INDI windows on and off. This reduces clutter on the desktop when you don't actively need them and a better chance of seeing the windows that are active but not placed on top. I encounter similar situations when using Windows 10 thinking the window I'm working on has gone dead.
Mach1, TS86SDQ, ASI071, ASI174, OAG, focusPro
2 years 1 month ago #36165