I recently submitted changes to the Polar Alignment Assistant (PAA) used in KStars/Ekos, in the Align tab. It is currently part of the latest source code, and will be part of the next nightly build. I encourage folks to test it and send feedback.

Summary of the changes

The user interface is very similar to the previous version, with a small change detailed below.  The big difference, though, is that polar alignment is no longer constrained to be done pointed at the pole. If you don't have a view of the pole, you can still use the PAA and don't need to drift align. I also believe that the PAA computations may be more accurate than before, though that's hard to prove.

Please note that this change extends work that Chris Rowland started, and I could not have done it without his previous efforts. Thank you Chris.

Usage with a view of the pole.

Using PAA away from the pole.

The procedure for polar aligning away from the pole is very similar to doing so at the pole. However, there are a few new things to keep in mind. Most importantly, instead of pointing at the pole, you need to point your scope to the part of the sky where you want to polar align. You should probably do this after connecting to Ekos, using the KStars sky map and the 'slew to mouse pointer' command. One easy way to do that is to go to the KStars settings menu at the top of the SkyMap, select keyboard shortcuts, type slew, and then on the 'slew to mouse pointer' line, create a keyboard shortcut--I use control-L. Then go to the map, click on where you want to move your telescope and type your shortcut. Of course, your telescope needs to be unparked before you slew. You can begin the polar alignment procedure after the telescope reaches the start position.

Please keep in mind, that starting from the position you select, the telescope will slew twice in RA in the direction you choose (East or West). Each slew will be the number of degrees you select. Obviously, you want to pick a part of the sky that's visible, and that will be visible when slewed twice in those directions.

Also, please keep in mind that you may not be able to cross the meridian with your slews. If you have a telescope and mount/tripod where the telescope would normally perform a merdian flip when crossing the meridian, like most of us, then you can't cross the meridian in this procedure (meridian flips don't make sense in the middle of PAA). Thus, a good position to choose to start PAA could be, for example, starting about 5 degrees West of the meridian, and slewing West. Alternatively, you might choose to start a similar angle East of the meridian and slewing East. The angle per slew defaults to 30-degrees, but it might make sense to choose a smaller angle, e.g. if you don't have 60-degrees of available sky from that position (or possibly to reduce the effects of atmospheric diffraction). I've tried 20- and 25-degrees per slew and it seemed to work well. Note that if the system thinks you have set up to cross the meridian, it will pop-up a confirmation dialog (it's easy to make that mistake).

I have tried several different north-south positions (I'm in the northern hemisphere) including south of the celestial equator, and all have seemed to work out. My guess is that if you have a choice, it might be safer to go with the position nearer the pole, but am not sure about that. This is a new thing, and we're all experimenting with it, so I welcome your comments on how well certain positions and angles worked out.

Once you have your telescope at the start position, and your directions and angles set, you can press start.

The procedure now works the same as when you've pointed at the pole. One thing you may notice, though, is that, although at the pole, the altitude and azimuth corrections are orthogonal in the image, in general they are not orthogonal for other parts of the sky. See for instance the below image where the angle between the yellow and green lines is about 45-degrees: 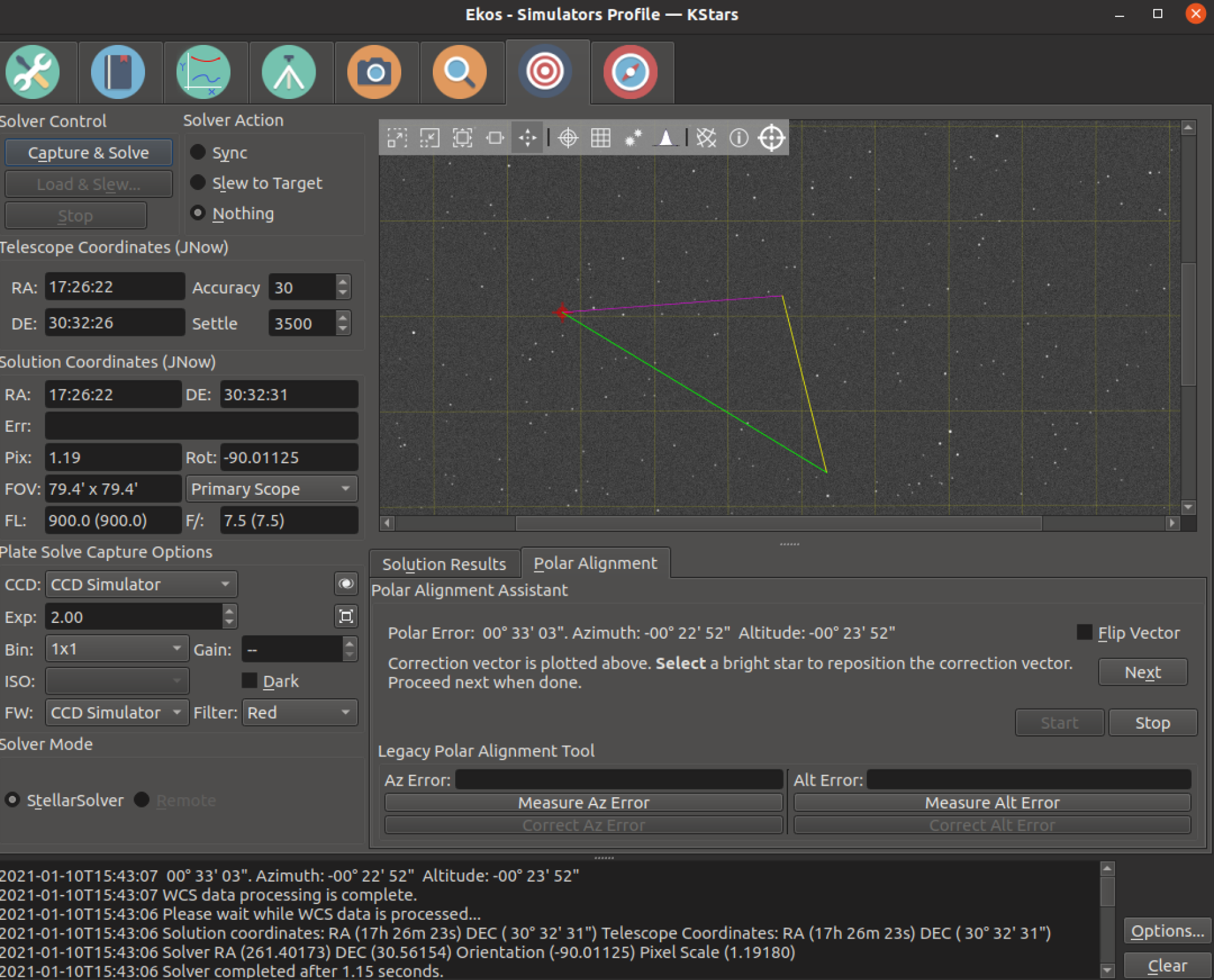 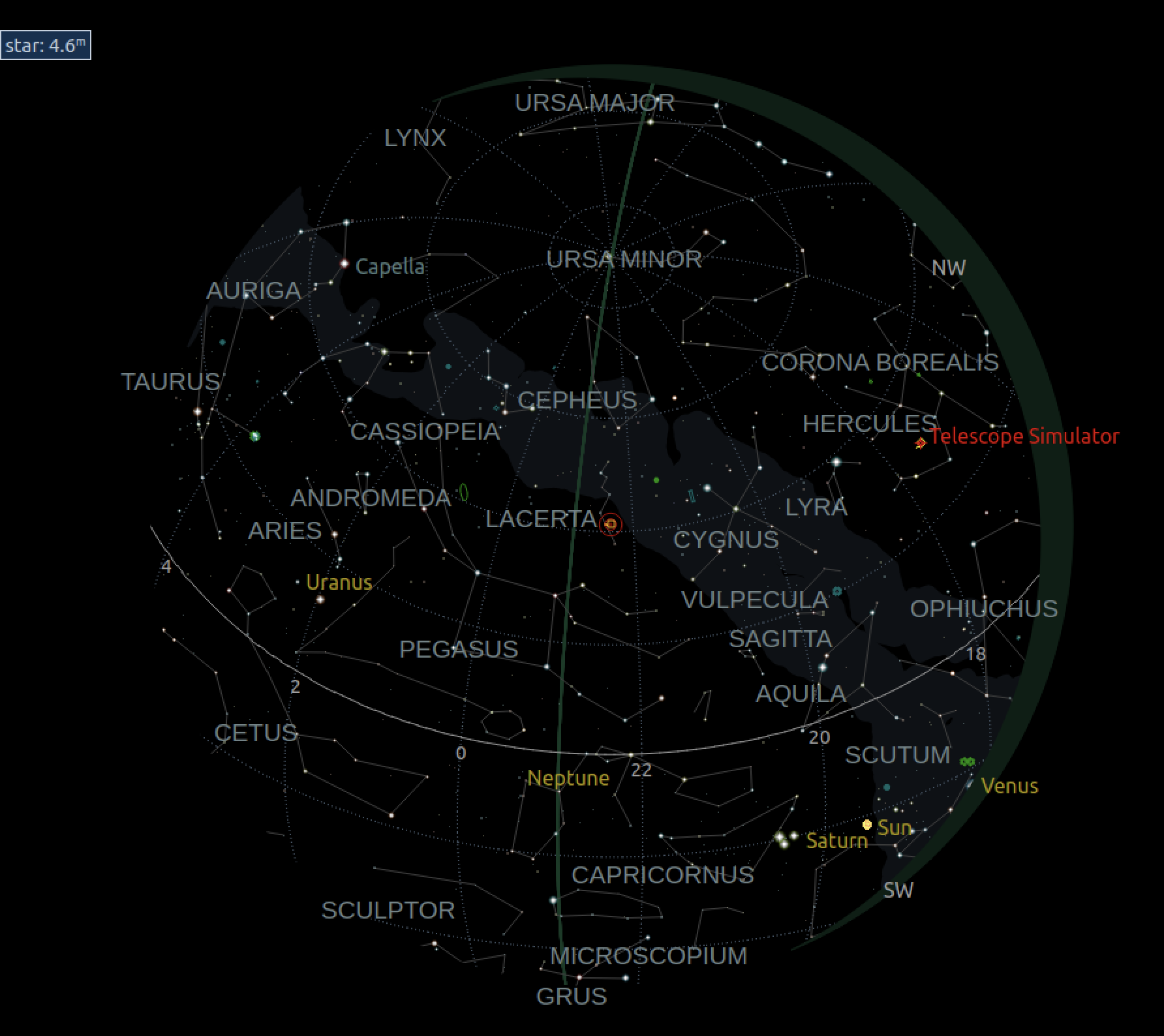 How tested is it?

I ran perhaps 20 off-pole polar alignments in the past 2 weeks and another 5-10 on-pole, all with my telescope and mount. I ran many more with the simulator. Things worked well for me, but clearly we need more testers. I also welcome testers from the southern hemisphere, as I was only able to simulate that, and not test directly.

If you compile from source or use nightly builds, please give it a shot if and report back!

How will you know you're running the new version?

Honestly, I could have done better here, by giving some visual clue at the start that this is the new scheme. I didn't. If you are compiling from source and you run 'git log' in the kstars directory, you should see this line in the git log commit:Note, this was commited on January 10, 2021, but I guess git kept the date from my first development commit (Dec 20).

I am still to fully consume the information but it looks like a great new development - thanks!
Max S.

Great work again Hy!
I like that the PAA is being improved.

A suggestion, would it be possible to auto-select a star and live report the distances between the center and the yellow and green lines?

In that case it's less depending on what the user sees, visually but it's simply calculated (and hopefully more consistent?)

and a suggestion for an option:
on 'the way back' slewing, calculate the polar alignment again, as a verification, in stead of going to go 'forward' through the PA routine again.
Could be a button 'done & check' next to 'done & park'.

I would like to (help) develop this, but would need help understanding the current code structure.
Latest Stellarmate on Rpi 4B, 294mm-pro, EFW-8, CEM70
2 years 2 weeks ago #65754
The topic has been locked.

This looks great Hy. My dark sky location has a good view of the pole, but when I image at home I've got trees in the way, so this will be really nice. I won't need to use the legacy polar alignment anymore.

The color triangle showing how much to move each knob is going to be a BIG time savings. Thanks for doing this!

Hello Hy.This looks like a terrific further piece of work! I look forward to using it when it arrives in the Astroberry Server distribution, I’m afraid I’m not software literate enough to be able to be one of your testers. However, if I recall correctly, I mentioned some time ago in the ‘wish list’ that I wondered whether the PA routine could make the 60° rotation before capturing the first image, rather than after the adjustments are terminated? This would mean that the telescope would be back in ‘home’ position at the end of the routine when the diagnosis screen is displayed so that the Az and Alt motions would be shown as horizontal and vertical movements on the display. Just a cheeky request!
Currently running KStars/Ekos/Indi on two Raspberry Pi 4Bs 4GByte under Raspberry Pi OS thanks to Astroberry
Two mounts, two Fracs, a Newt and a Mak and a couple of OSC cameras.
2 years 2 weeks ago #65792
The topic has been locked.

currently I can only test the ui in the simulator.

There is a discrepancy between your explanation and the information label.

and some cheap hardware
The following user(s) said Thank You: Hy Murveit
2 years 2 weeks ago #65795

Heiko (@cerro torre): Good catch. That line in the running system should say "moving along green line".
I'll send in an MR.

BTW, I'm impressed you got it working with the simulator. It took me quite a while to figure out how to do that.
Here is what I wound up doing:

Your suggestion of auto-calculating the distance and reporting it is something Jasem and I have discussed and hope to implement. It wasn't part of the initial release of this, as it adds complication. In one sense it really is not too complex, but it might require StellarSolver to run again and often, e.g. every second to know where the stars have moved (I would rather not re-introduce some cheap star detection). I think it is possible to solve very very quickly if we strongly constrain StellarSolver, e.g. the solution must be < 1-degree from the previous solution, and the scale should be almost identical to the last scale. Not sure if it would require a StellarSolver change. Getting "quick nearby solving" is the trick to getting that to work. Anyway, after getting feedback and fixing issues on the current basic implementation, I plan to add that.

On your second suggestion, I'm not 100% sure I understand. When the alignment was done, If you switched the direction (e.g. if you were slewing East, change to West) and hit 'Start', would that do what you wanted? I suppose there could be a shortcut for that, but checking that that is what you mean.


Argg, I knew it: gremlins at the tripod!!

This was the missing part: how to misalign a "perfectly aligned" system

What is the purpose of the Flip Vector check mark?
Setting the mark puts the crosshair on the star that should be moved and at the end of the yellow line there is no purple line. 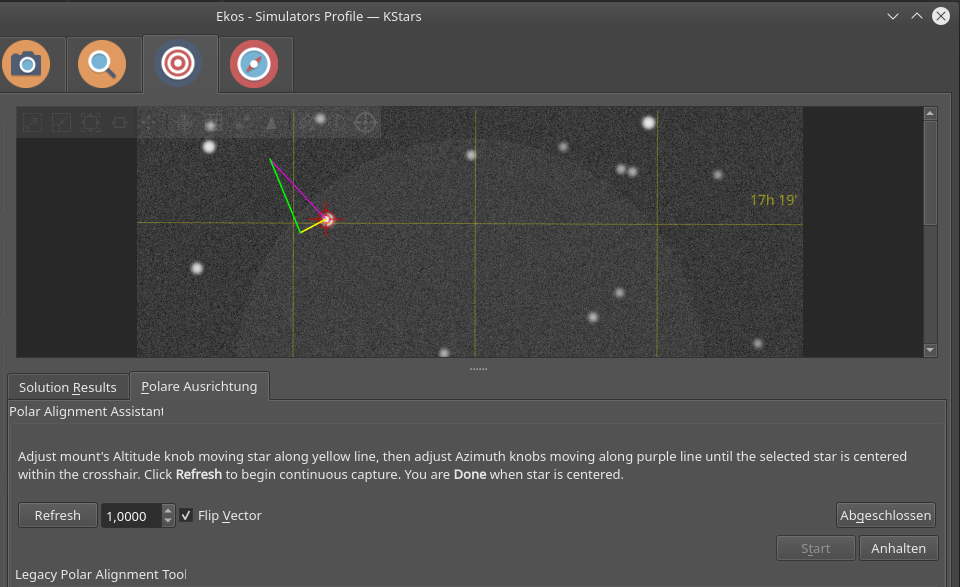